BROS IT'S 3/11. Don't stay home this time, because it's time to burn one in honor of Nebraska's rap/rock pioneers! A dubba-dubba-dubba!

Man, that shit really holds up!

OREGON CAN JUST TAKE THE FULMER CUP RIGHT NOW.  At least for team accomplishment, since even Oregon fans are conceding that none of this is good, and the formal charging of your starting quarterback with second degree felony burglary is very, very bad news. Chip Kelly will make a public decision on what to do with both Masoli and LaMichael James, or as you know them "the Oregon Ducks' starting backfield in their base spread set,"  on Friday. Everyone in Eugene just settle down until then, y'all. Chip Kelly can't punish you all at once. 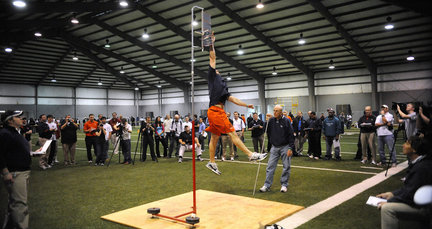 You thought that was a cheetah or something, right? US TOO BUT IT'S CHRIS TODD. The future number one pick by the St. Louis Rams in the 2010 draft took it easy at Auburn's pro day, only throwing a few balls through the chests of receivers and pulling up a bit at the end of his 3.8 forty yard dash. As for the bench, he just did 225 until everyone got bored and left. Far as we know, he's still popping it up and down off his chest like it was a PVC pipe at the time of writing.

DON'T MAKE US RESPECT YOU AND YOUR SILLY FIRST NAME, SIR. Dabo Swinney proposes a spring exhibition game against Georgia, and thus immediately wins the undying love of T. Kyle King and every other Clemson or Georgia fan who remembers the clash of civilizations the rivalry once embodied. Additionally, he proposes turning the spring game into something you could sell, and yes, putting another "game" on the schedule, which would present some serious issues regarding the ongoing conflict between academics and athletics, the swelling size of college football's footprint on campus, and GIMME GIMME OMG GIMME--

REAL LIVE FOOTBALL COACH INTERVIEW. It's Iowa State's Paul Rhoads, but it is a live big-boy school football coach doing an interview on a podcast with a pair of blog-types, and thus ONE HUNDRED COCKTAILS to the Solid Verbal for getting him on the show. It's, you know, good too.

THE SEARCH FOR AN ACC GIANT. Andy Staples is looking for the ACC's Leviathan, which is always fun in spring before everyone begins picking each other off in conference play in the fall and reminding you what a morass the conference inevitably turns into sometime around October. The one great change really is Georgia Tech, since the default settings of Virginia Tech or Florida State can no longer be applied. Wake Forest really didn't win the ACC, and no amount of documentation or video will convince us of that. Those were warm-up ACC championships, and by a new rule games played in Jacksonville will not count towards win totals. This is an ACC rule only, Georgia fans.

TOM LEMMING WOULD LIKE TO SPEAK WITH YOU PANTSLESSLY. Maize and Brew has a fine guide on how to properly troll recruiting message boards in the offseason. Do it like Lemming does: sans trousers.

MATCH BOOT PRINT. ENHANCE...ENHANCE... Names are blacked out in the police report, but Washington DE Andru Pulu has been suspended in connection with an assault investigation. We say assault, and we mean it:

The 22-year-old "has a broken nose and possibly a fractured cheek bone," the officer wrote. "I observed severe swelling to the left side" of his face and "a boot print on his right temple."

WHERE ARE YOUR PRIORITIES? The Big Game is changing its date due to conflicts with something called "exams." Whatever: it's not like anyone gets Cs at Stanford, anyway.