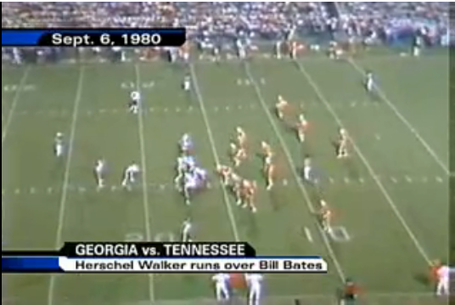 A. Diana Ross' "Upside Down" became the number one song on the Billboard Charts that day. This song, along with the Saturday Night Fever soundtrack, the Chipmunks' Disco album, and Jimmy Buffett's Son of a Son of a Sailor were the earliest records i can remember being in heavy rotation at the house besides the Flash Gordon soundtrack, a record I played so much as a ham-handed four year old that, when I found it years later in a crate next to a Gino Vanelli album, it was little more than black wax and scratches with a few visible concentric circles containing what was left of Freddie Mercury.

B. Tennessee's wearing the horrible, horrible all-orange unis. This is pre-glossy lycra stretchy pants material, so there is absolutely no sheen to the unis whatsoever. What hits the eye first is horrible, dull, Cheeto orange, the exact luminous shade that throbs against the eye when you catch a cheap orange poncho or hunting vest out of the corner of the eye. Mock Nike tinkering with modern unis all you like, but at least the glossy takes the edge off the eye-rape of the occasional all-orange Tennessee kit. (Not that we hate them all: the Halloween candy corn uni was the only good thing Lane Kiffin did as head coach of the Volunteers, because those were electric holiday sex in motion.)

C. Even via a Youtube clip, it's apparent we're watching this in the muted tones of glorious analog. In our case, it was via the double row cable box, the kind with a slider for the upper row of channels and lower row of channels. We stayed away from the lower row, because that was where Showtime was. (They showed Altered States all the time, and that movie scared the shit out of me.)

D. I didn't watch this live: chances being what they are, you didn't either. I watched it on replays on WSB-TV from our mid-level house in Snellville, which in my mind at the time was three blocks away from downtown Atlanta on a tourist map my brain lifted straight from the info stand at Stone Mountain. Atlanta at the time was everything fantastic and dangerous, especially because this was around the time of the Atlanta child murder, and nothing is more important to a child than someone who cares about children--especially if he's killing them. Due to poor file organization by a young memory, the double murders of Anthony Carter and Earl Terrell in July of 1980 and subsequent killings are in my mind tied to the rise of a square headed running back with a soft southern accent and long, loping legs. It's an adhesion thirty years have not undone.

D1. The victims, in large part, came from a pattern centering on Memorial Drive, a road this is being typed just a few blocks off of on February 9th, 2010.

E. Television stations really did come on the television at six o'clock every night and announce: "It's six o'clock. Do you know where your children are." Then my mom would turn the channel to the Muppet Show, because a child that watches the news needs an antidote. If you wonder what a formative moment is, that is is one: murder, then football, then the Muppet Show. Nothing's progressed much since then, attitude-wise.

F. On this Tennessee team: Bill Bates, future Cowboys safety, and Reggie White, defensive end, Chunky Soup spokesman, and noted orator. White would die the day after Christmas in 2004 on the same day as the Indian Ocean tsunami in one of the strangest news days ever. Bill Bates is playing safety, and though he's still very much alive, he's about to die in this clip.

F1. Phil Fulmer is in his first year as an assistant under Johnny Majors. He's the one waiting in the wings with a knife on the Tennessee sidelines. Being slow, it took him 13 years to stick it in Majors' back. But he's there.

G. I-Formation. Vince Dooley football, and nothing fancy about it whatsoever. The lack of formations in 1980s footage will stun even the novice viewer just picking patterns off a screen.

H. Munson. The earliest voice I can recall calling football games: a crackling, nasal, grumbly sound made by a voicebox broadcasting from a tinny radio in the 1930s even off-mike.  Even to young ears, there was something unhinged and raw in the timbre of his voice. Between him and John Ward, there's a pre-memory connection whose roots I can't even properly trace. They go right to the emotional wolf-brain and bypass reason. 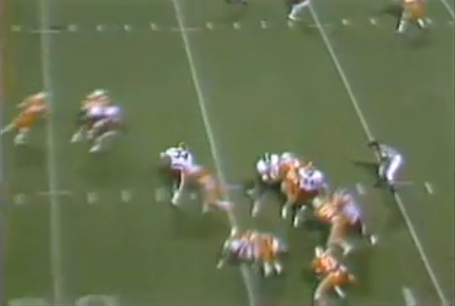 J. Tennessee led this game, mind you, 15-2 at the half in the kind of game that can only make Tommy Tuberville smile. Walker, in the midriff jersey and high socks, was a halftime adjustment.

J1. Using the term "halftime adjustment here is like saying the use of the atomic bomb in World War two was a "late substitution.

J2. The midriff jersey wasn't just an early 80s thing: the ab-exposing half-top was the choice of Chris Spielman and other torso-confident individuals until the early 90s. Watch old film of the Miami Hurricanes and you'll see tons of them. They have vanished into the annals of uniform history along with the beloved linebacker neck roll and the single bar helmet.

K. Walker cuts back against the grain of the play and slips his first tackle. The cutback is the most basic running back move, and it's sadly underutilized. Even at the pro level, only the Shanahan-era Broncos used it to its fullest. One misdirection is better than three, especially when you have a furious cheetah-cyborg altering the angles of pursuit for you. It's that cut that opens the play up: green yawns out in front of him, and with the wide receivers faking streaks there isn't a corner in sight to make the tackle. Safety Bates, mindful of the play-action threat with a lead, hesitates for an instant.

K1. If you're a Georgia fan, there are two gasps: one, for the obvious gain on the play, and two, for the potential. No one knew that they were watching the most productive running back in the history of college football sprint like a newborn colt in front of them. Remember the best part of all this for them: they were watching something new and untested rip its way to life.

K2. For Tennessee fans, it's the horrid, stomach-flattening quease of a blown defense on a run. 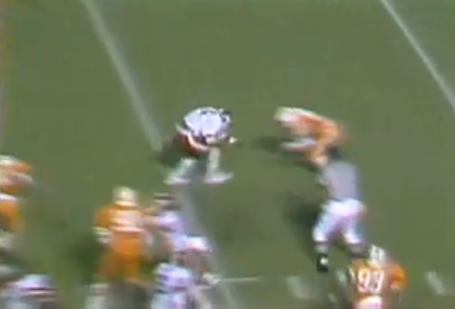 L. Bates engages. There's little worse than doing everything you're supposed to do and still getting destroyed by the vicissitudes of fate and genetics far superior to yours. The postures of the two are unique to humans alone: even when ramming, mountain goats and rams will start from the superior position and attempt to strike down with gravity. The bodies in position are precursors to the Tebow/Berry collision of 2009. The results are drastically, drastically different.

L2. Sometimes, there is no hope or chance. This is a reminder. If Hemingway's watching, he reminds you that the struggle is all that matters here, and that Bates is doing what he should: facing fate bravely. True. He's also about to die a horrible, horrible football death, the kind they usually fail to mention when doing the BLAH BLAH WHITE SHORES AND GLORY part of the speech. It's noble to fight the bear, but remember: when he eats you, you're probably going to have to watch some of the gory footage. 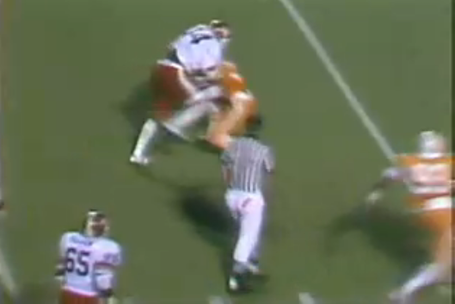 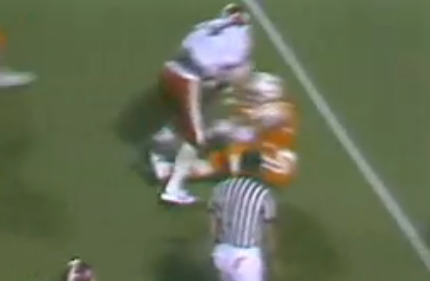 O. The low man is sacked and burned to its foundations. 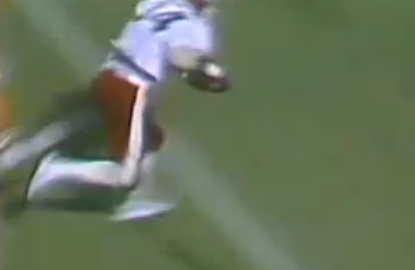 P. Bates actually makes a game attempt to grab Walker's leg. That is fighting to the end, even against unreasonable odds and unstoppable force.

Q. Tennessee would lose this game 16-15, and I would wager large currencies that even now the memory rankles the gut, because the endorphin payoff from winning never balances out the lingering stain losing makes on you. Perhaps it's evolution's way of marking things you have to avoid or rethink before attacking in the name of food or mating: THIS THING BITES, TRY NOT TO TOUCH IT AGAIN. It would certainly explain long losing streaks by teams against other teams that defy all other explanation. Assocation, fear, imprint, and repeat.

R. Walker may have never recovered from early success. He would be a vagabond pro football player, a member of the USA Bobsled Team, a fast-food entrepreneur, a tae kwon do black belt, a self-proclaimed victim of "Disassociative Disorder,"  a reality show contestant, an author, and now a budding MMA fighter at the age of 47. Look back and tell me this was the career trajectory on September 6th, 1980, and you will lie.

R1. He turned out to be human, and that's the source of the discord in the memory. Walker would go on to run loose on the SEC for another two years in the single most dominant streak by a running back ever, and in the mind that's where a part of him stays, with the memory bumping up discordantly against the present Herschel just like the 1980 team likely sits against current Georgia teams. Frank Zappa said "Nostalgia is a form of depression." This is ever true for sports fans whose past glories inevitably take bites from the present.

S. Bill Bates would play in two more Super Bowls than Walker would.

T.  You probably lost track of the yardage. That's only 16 yards, and it feels like thirty, easy.