FSU VACATES WINS, PUNISHES NOTHING AND NO ONE

Share All sharing options for: FSU VACATES WINS, PUNISHES NOTHING AND NO ONE

Tomahawk Nation touches on the most damning part of the Florida State Seminoles' attempt to fight the vacation of wins due to academic finagling in a music appreciation class taken by scores of athletes on multiple varsity sports teams: Florida State was given the option of vacating those wins in a wrist-slappy move, denied the generous offer, spent over six figures defending the case, and still lost anyway and had to vacate the wins. When the NCAA admits that they're toothless but insists on gumming you anyway, take the gumming. Insanity Wolf has no idea what you were thinking. 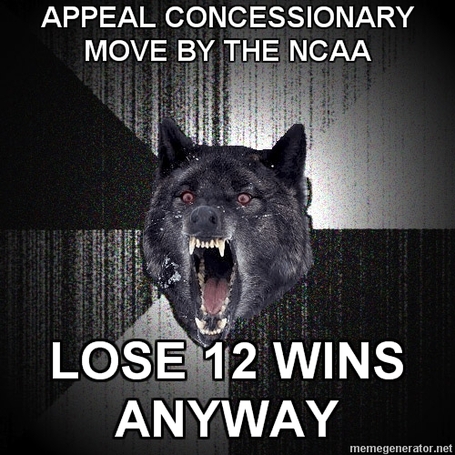 So yes, HAHAHAHAHHAHAHAHAH FLOLrida State. It should also be mentioned that vacating the wins does nothing in the football sense but hurt Bobby Bowden's career win total, who as much as we would love to blame for this was so out of it and distanced from the program at this point that casting shame on him for this would be an act of pure, irrational spite against all logic and reason. Looking at the site's prime directives...yes, the official EDSBS stance on this is that it was all Bobby Bowden's fault, and he deserves all the blame.

On a larger note, the NCAA's reason for existing becomes even more nebulous. As far as we know, the NCAA hands out large sanctions to tiny programs committing infractions defined by charter rules, collects large dollars for running a huge basketball tournament, and keeps a pretty handy stats page for NCAA football. Much as we'd like to pay an organization hundreds of millions of dollars a year to do this, there are probably more efficient ways to do this, much less ones that involve an organization with actual powers of sanction.

(Then again: if the NCAA merely represents the will of its members to regulate themselves, then there is zero will to regulate programs who commit violations.)

At this point, though, Florida State doesn't seem to care about the vacations. or about the permanent vacation Bowden has taken.