Congratulations to New Orleans Saint Bobby McCray, who has one more Super Bowl ring than Chris Rix this morning and many more NFL paychecks after last night's Super Bowl. To ride the full circuit of Super Bowl narrative self-correction: blissful at the idea of NOLA winning, realization that it is not your team and that the New Orleans redemption storyline is crap, but that it's a very good thing anyway, and yeah go ahead and be happy since no other single place has such a firm grasp on the emotional shorthairs than New Orleans--not even home, really. Ignatius Reilly would not understand any of this, but he would have a beer with his mother in the midst of the revelry and note its similarity to early Christian festivals in medieval Europe, and ask the gentleman behind him to refrain from spilling his beverage on his overcoat.

Our favorite part was the part where Tim Tebow walked out in his underwear, punched a panda, and then told him Mom women were to blame for all his problems. The Tebow commercial had so many highlights that it's hard to pick one: maybe the part with all the white background, or the part with the hug, or the...wait. That was the entire commercial, and was no big deal since it was just a simple Trojan Horse pointing you to the internet, which you're on anyway.  We can now return to the important things like calling his throwing motion a frittata, suggesting he believes Jesus rode dinosaurs, and saying that we love him despite all these things because a.) he was awesome at Florida, and b.) we like college quarterbacks to win games for our college football team, and really could care less about how their future endeavors impact the past glories of our football team because they don't.

Yeah, he mad. The best things we've seen glorying in Manningface this morning. Not that it's an unusual thing, really.

The caption on that is the best: "Peyton Manning completes a beautiful 88 yard TD pass to Tony George." Every week is Hate Week when you're a college football fan, sirs and madams, and lack of exercise makes the muscles of the spite chain atrophy. Exercise them regularly for best results. 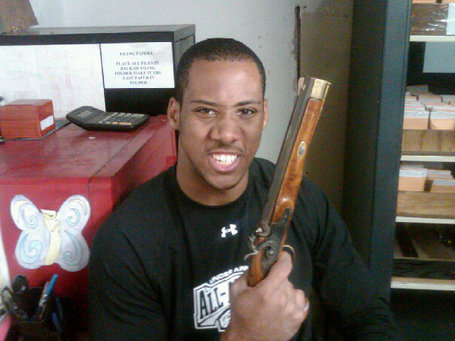 Corey Lemonier should probably think a bit more about the kinds of pictures he puts on Facebook, even if he doesn't own all those guns and has a legal right to own them. However, if he is going to get into trouble with one in the future, please let it be with the flintlock pistol, or better yet an unseen blunderbuss with a foot-wide powder pan that fires a hunk of old ballast crammed into its barrel. It would make Mike Leach so very happy that way.

Our defensive staff could be more naked and hung than it was previously. If the departure of Charlie Strong and his boundless masculinity troubles Florida fans, rest assured that the potential hiring of former Notre Dame assistant Corwin Brown as the new defensive coordinator would improve the "dudes who'll strut it naked and proud" quotient of our coaching staff by a furlong or two.  Dan McCarney already does this all the time, too, but he clearly needs company.