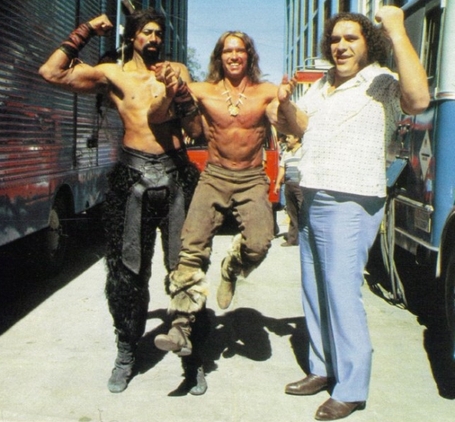 From the epic tales of Andre's booze consumption:

On one tour, Andre’s Japanese sponsors rewarded him with a case of expensive plum wine. Andre settled down in the back of the bus and started drinking. Four hours later, the bus arrived at the next venue, and Andre was polishing off the last bottle of wine.

Sixteen bottles of wine in four hours is a considerable feat, but it gets better. Andre proceeded straight to the ring and wrestled three matches, including a twenty-man battle royal. The 16 bottles of plum wine had no discernible effect on Andre’s in-ring ability. By the end of the evening, Andre had sweated off the wine and found himself growing cranky. He dispatched Hogan for a few cases of beer...

When the bartender hollered last call, Andre, slightly annoyed, announced that he didn’t care to leave. Rather than risk an altercation with his hulking customer, the bartender told Andre he could stay only if he was drinking, imagining, surely, that he would soon be rid of the big fella. Andre thanked the man, and proceeded to order 40 vodka tonics. He sat there drinking them, one after another, finishing the last at just after five in the morning....

...The shooting schedule required Andre to be in England for about a month. When his part wrapped, Andre checked out of his suite at the Hyatt in London and flew back to his ranch in North Carolina. His bar bill for the month-long stay?

Rest in peace, Giant Booze Angel who was too large to properly be called a "barfly." We dub thee "bar-pterodactyl," and remind readers that while he is extinct, his memory of lusty nightlife lives on in our hearts and livers.

Holly: [that bacon thing from Leon's].  This drink tastes like Athens, Georgia in October. What I mean by this is that one swallow filled me with both an overwhelming sense of smoky beauty and a desire to fight the first living thing I could get my hands on. (My sincere condolences to that bamboo stand in the lobby.)

Warmups to this zenith of alcoholic existence included something called a "Gutter Pop", which was read and ordered because it was called "Gutter Pop", and the Winter Daiquiri (spiced rum, fresh pineapple & lime, honey, aromatic bitters, and allspice), which I had to try because anybody making a daiquiri without a Margaritaville countertop swirly machine deserves your business.

Orson: Someone suggested, and I think seriously, that we do a vegetable here. "Hey, you should do a vegetable, you know, since animals have faces and than give you sad looks while you gnaw off their delicious hindquarters, and that makes them sad." It is a valid point. Vegetables are an essential part of your day, just like brushing your teeth, doing the dishes, and taking that embarrassingly pungent bowel movement that ensures your co-workers assume you live on a diet of cat food, beets, and lentils. Don't you want to read about those?

Of course you don't, and that's why we're talking about the fakest food product imaginable: The McGriddle. 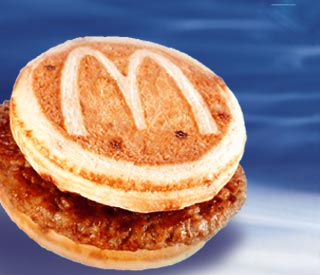 Molecular gastronomy on the cheap, motherfucker, because they inject the syrup directly into every molecule of the muffin/drink cozy they serve the meat product in millions of times a day. Some Spanish twat charges you twenty bucks a pop for one of these and embosses his initials on the top, and you're cooing like a farting baby at the "gusto with which this Iberian rebel redefines cuisine!" See it on McDonald's menu and you're all, "OMG McDONALD'S PUTS CHEMICALS IN THEIR FOOD AND I DON'T WANT TO EAT CHEMICALS." They're brilliant Frood (fraud-food), and don't deny it. At $1.59 they're as frugal and freaky as your mother is.

Holly: I have relentlessly plugged her Super Bowl series on every outfit that will let me near a keyboard this week, so here's one more push heading into gametime prep: Sarah Sprague's Buffalo Chicken Dip. This post is now over two years old and it's the one I always direct people towards when they're looking for a tailgate recipe that's basically an affront against God. 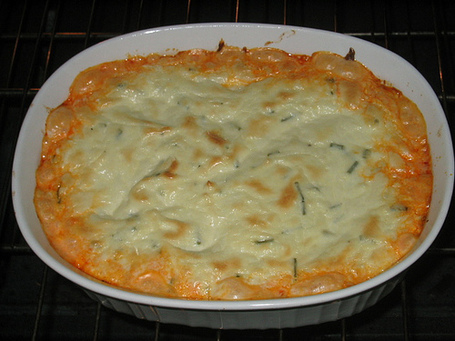 via Black and Gold Tchotchkes

It's exactly what it sounds like: You mix up a batch of shredded buffalo chicken, cover it all in cheese, bake it, then top with STILL MORE CHEESE. This concoction could not be more perfect if it were made from rendered baby panda fat.

Holly:  I have a squirrel problem at my new house. Just having squirrels near me is an issue in itself, having developed a healthy fear of them in college. (The biggest squirrels on earth roam the hills of Knoxville, Tennessee. I'm pretty sure they're living off the decomposing stiffs at the body farm and it's given them zombie intelligence.) But I have these lovely wide windowsills on which giant squirrels are apparently fond of fighting, like, really fighting, which wouldn't be so bad if I could catch them and put them in a ring and make money off it, but no, they're fucking fast and they're rattling my bedroom windows before it's even light out.

So while it's not precisely combustible now, the following compilation of squirrel launchings, like most things, could only be improved with the addition of fireworks:

I smell a business model waiting to happen. [brought to you by HEY WATCH 'IS, LLC]

Am I supposed to be rooting for the avalanches in this video? It's like you've painted the world into the corner I've always wanted to be trapped in: civilized society and expensive skiing goods indicative of our sick, overly materialistic society on one side, and freezing avalanche death and AC/DC on the other?  No, that's not a TEAM AVALANCHE shirt i'm wearing, i'm just overcome by the sinister combination of anything and AC/DC. No, officer. I did not rob those banks willingly, but someone suggested it to me after taping headphones playing "Shoot To Thrill" to my ears, handing me a gun, and nodding. It might have been a better idea not to do it naked, and thus making me more recognizable from the security footage, but I thought burning down the buildings afterward would take care of that. Damn you, virtual servers. 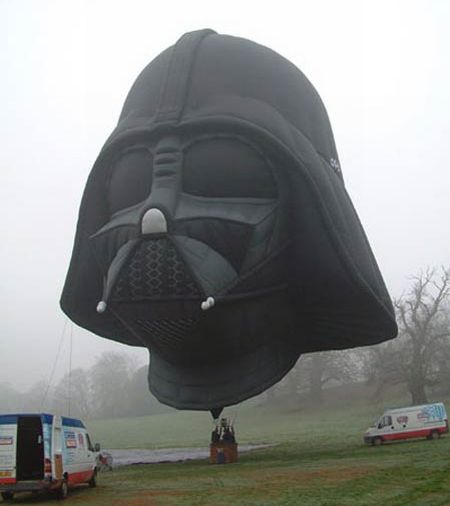 The least efficient method of transportation in the chronological sense, a hot air balloon is the choice for the distinguished gentleman so profligate with his immense sums and so untrusted to get behind the wheel of even the sturdiest vehicle without a bloodstream surging with liquid courage that he must, indeed, be stuffed into a basket and shot into the sky at a leisurely pace. "So, old boy, when will you be here?" "Oh, I don't know, sometime tomorrow." "And where will you land?" "Oh, wherever." "Will you bring gin?" "Only if I don't consume it in the balloon, old chap."

A great way to meet new people since you're perpetually frying yourself in power cables, trespassing by landing on other people's property, and dropping bottles onto new and excitingly different people's cars and homes. The most insane record of all adventurous records is still the round the world balloon trip, which two guys finally did in 1999 by throwing themselves in a bucket tied to a massive balloon and then just hoping something good happened. Something did: they lived, but ended up landing in Mauritania, where slavery still exists and a jackal in a coat with epaulets serves as its Prime Minister and most popular television host. Even when ballooning goes well, it doesn't go well, and that sounds just perfect, thank you.

Holly:  Mother Russia's Hind helicopter. A winged death-bringer without peer, the Mil Mi-24, code-named "Hind," commonly inspires two immediate thoughts: First, "That's the ugliest fucking helicopter I've ever seen," followed closely by "OHSHITRUN." The second is the more salient of the two, as the Hind is commonly armed with a nose-mounted double-barrel 23mm cannon, two S-8 rocket launchers, and two pairs of antitank missiles on the wingtips. There are some things you can't blow up with a Hind, but they aren't things you're likely to encounter in a typical day.

This thing has killed more people in the Third World than malaria. The best part, though, is that the helicopter has room for all that plus eight troops, so you can bring along friends to watch the destruction (and, presumably, help clean up whatever mess is left over). When we get mad, stupid Ochocinco-style money, we're going to buy one off the sleaziest Russian arms dealer we can find, outfit the cabin with leather seats and a flat-screen, and commute to Key West, where we will pick up Mike Leach and scare the shit out of kids on Spring Break. Join us, won't you?

February is the cruelest miserablest fucking month. It's the weather. It's the soul-shellacking, suicide-embracing weeks of sleet that pelt those of us fortunate enough to reside below the Mason-Dixon the rest of the year but not quite fortunate enough to escape it now and bolt either further south where it has the sense to be warm or further north where it has the sense to snow. Anything in between is entirely unacceptable. Onward: pop in this ten-hour BBC/Discovery series in blu-ray if you can get it (and go for the Region 2 discs with David Attenborough if you can get them, not that Sigourney Weaver gravitas-free version that aired in the States), play it on the biggest screen you can find, and be soothed by rolling steppes, big damn sharks, and otters attacking the shit out of a crocodile. (Just keep clear of the vampire squid.)

Orson: Wise Blood, Flannery O'Connor. You know who's funny? I mean, really and completely dark and funny in a way that only a person with a fatal degenerative disease can be without seeming like a total asshole? Someone with a fatal degenerative disease, that's who, a someone like Flannery O'Connor who had lupus and knew the clock was running.  Wise Blood is one of the funniest things you'll ever read, and will make you realize that Sling Blade and all other classics of the Southern Grotesque are essentially just remixes of the basic beats and riffs in Wise Blood. A warning, though: Flannery O'Connor funny isn't ha-ha funny, but the kind of deep, bitter funny where you see something really insane in real life later, juxtapose with the sudden memory of Hazel Motes and the Church of Christ Without Christ, and then realize exactly how precisely she understood her corner of the universe. From the woman herself, a warning not to confuse the regional grotesque with the unreal:

And everyone in LA acts just like the people in Entourage and Crash! Just read her, either with Wise Blood or at the very least the short story "Good Country People."