GATES ON BEING A TEXAS A&M FAN: MORE STRESSFUL THAN WAR

Share All sharing options for: GATES ON BEING A TEXAS A&M FAN: MORE STRESSFUL THAN WAR

Robert Gates is our current Secretary of Defense, a position that was so much fiercer when it was called "The Secretary of War." Gates used to be the President of Texas A&M prior to taking his current job, and picked up quite a football problem while he was there. You might think coordinating the flow of American military might across the globe would be stressful, but according to Gates it is nothing compared to the agony of watching Dennis Franchione rape your program with a rusty poleaxe of incompetence.

We'd been talking about the stress of congressional hearings, the burden of sending young men and women to war, and just as our conversation was drawing to a close, he said, "I always used to tell people that Texas A&M football caused me more stress than any job I've ever had. And they always thought I was exaggerating." I expressed disbelief, but he stood by the statement.

You might be taken aback by the comparison, but Aggie fans? You're nodding your head and do not deny it. 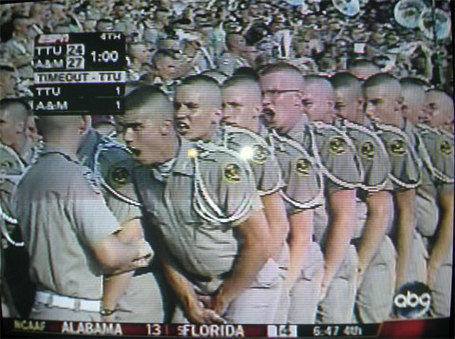 That does look stressful. (via blogs.houstonpress.com)