Share All sharing options for: HOW THEY TELL IF RECRUITS WANT TO BE AT USC OR NOT

"I watched it over the weekend, just to see if it's the same, and it's really still the same," he said. "I guess we waste time continuing to recruit them. We know within the first 10 minutes whether they're the type of guys that want to play here or there." --

RECRUIT NOT NAMED walks into the football offices at Heritage Hall. LANE KIFFIN enters, eating the butt end of a sandwich. He throws the wrapper on the tile floor without looking.

Kiffin: Hey, numbnuts. You want to be a part of this?

Kiffin: You don't get a name until you take your shirt off. Tell him, Ed.

ED ORGERON bursts through the floor and leaps into the picture covered in plaster and some kind of blood.

The recruit takes off his shirt. Lane Kiffin picks up a Diet Coke from a desk, finishes it, and drops it on the floor without looking.

Recruit: Um, I..why do i have to take my pants off?

Kiffin: You heard him. Take your pants off and show us your wild boy.

Lane Kiffin stares. He picks up a huge turkey leg, takes one bite out of it, and drops it on the floor. it leaves a smear of grease on the side of his cheek. He does not wipe it off.

Recruit: Are we going to go on a tour or something, because-- 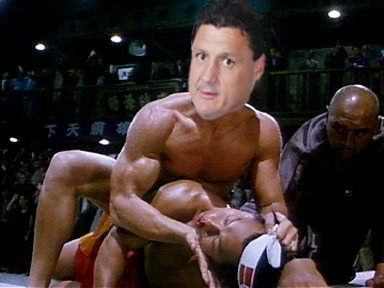 The recruit stares at the secretaries and coaches milling through the offices.

Recruit: I don't have anything on underneath this.

Kiffin removes a Red Bull from a drawer, drinks half, and then tosses it over his shoulder.

Secretary: Goddammit! That wasn't even empty.

He takes off his underwear and stands naked in the office in front of no fewer than 20 people.

He and Orgeron grab the recruits clothes and start running toward their offices. Security guards take the young man and throw him out of the doors and into the campus in broad daylight. They watch him peeking through the blinds.

Kiffin: What's he doing? Is he running, or is he strutting?

Kiffin: He can go to UCLA, then. A Lane Kiffin man has no time for shame.

Kiffin: Maualuga was walking around asking for girls' numbers, for Pete's sakes.

Lane Kiffin sniffs at a hot pizza on his desk, picks it up, licks it once, and drops it on the floor cheese-side down.

Kiffin: CLEANUP ON AISLE BIG BALLS! I'd do it myself, but I'm allergic to work losers do.

He walks out of the office.