WHAT YOU SEE AFTER FIVE HOURS OF WATCHING RECRUITING

Share All sharing options for: WHAT YOU SEE AFTER FIVE HOURS OF WATCHING RECRUITING

After watching recruiting for five hours straight, a kind of hallucination takes hold. You first see a recruit, then a bunch of hats sitting on a table arrayed in a neat row in front of him. Then, he begins to speak in the mumbly tones of most eighteen year olds about how hard this decision has been, and the the twerp with the huge tie and gelled, immobile hair asks him where he's going, and he picks up one hat, but then reveals another, slightly smaller hat beneath it. 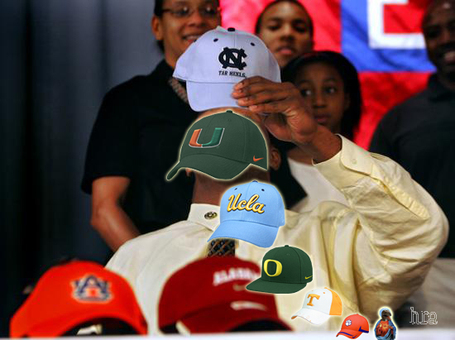 Perhaps we need to need to stop watching ESPNU. You see tentacles coming out of Todd McShay's ears, right? And the vial of the blood of Solomon around his neck that the angel in my ear is telling me is necessary for the salvation of the universe, yes?