important and non-important notes from around signing day. Always. Be. Closing.

Mystery Date With Obscurity: It has been made. Calvin Smith, reading his statement at gunpoint, committed to Mike "I hit you because I love you" Locksley and New Mexico, where he can start immediately and immediately fall off the face of the football earth. Joining an ascendant program is one thing; going to a place where the coach is going to be fired for violently and repeatedly sexually assaulting a cactus in a public ragefit in two years is something totally different. Um, we mean "Good luck, Calvin!" 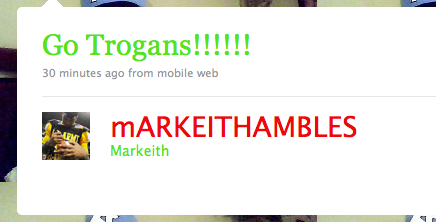 Seantrel Henderson, still pending. The drama queen of the day is Seantrel Henderson, who Tom Luginbill is predicting will sign with USC so Lane Kiffin can make a big splash at the end of the day. Please differentiate this from the loud splashing noise his career as a coach has made landing in the metaphorical toilet bowl of life thus far. They are two entirely different things.

Todd McShay, Flammable. Watching this throughout the day on ESPNU has brought several things to light. First, Robert Smith is breezy and quite tolerable in large doses. He's personable without being overly buddy-buddy, quick on his feet, and generally knows what he's talking about on-air. Second, Todd McShay has waxed into a first-rank douchebag, and his head is freakishly large and shaped exactly like Mr. Mackey's on South Park. If he bursts into flame on air, we're hitting rewind and record on the DVR.

Likin' it. All those stars. Here's how it works. Fewer you have, the better you're doing. Works like golf. Lowest score at the end of the day gets the silver turkey. Trophy. My words get mixed up sometimes. Getting better all the time. Fewer stars each year and gettin' closer. I see improvement. Maybe you don't. That's noise in the system, and it's correctable.

Don't even act like you're offended at the implication that Auburn's paying recruits. You have to pay people to live in Opelika, something the NCAA has recognized for years as an essential and permitted exemption to the NCAA's prohibition on paying players to get them to come to your school. As long as Bobby Lowder lives and, um...breathes? Aspirates air through his gills? Photosynthesizes? As long as he does whatever, it's going to happen there, and we ain't mad at ya for it. It makes Auburn the only honest program in the whole of NCAA football.

Money alone isn't enough to explain what they're doing this year, a top five class topped with the nabbing of Corey Lemonier. Only Trooper Taylor's whirling magic towel can explain the zombie-ish march of recruits towards Toomer's Corner, since you know it can't be Gene Chizik doing the mesmerizing down there.