Stephen Fry, whose Twitter bio reads: "British Actor, Writer, Lord of Dance, Prince of Swimwear & Blogger." Jailed as a rebellious youngster, Fry eventually made his way to Cambridge, which is fortunate for all of us since that's where he met Hugh Laurie, and that collaboration would eventually bring about the fine program A Bit of Fry & Laurie, in which Fry declaims, "BALLS!" with great aplomb and authority:

Also to recommend him: Fry was close with the late, great Douglas Adams and has since become the steward of Adams' Last Chance To See initiative, has an encyclopedic knowledge of whiskey, and in his book Paperweight, claims to "hold the UK record for saying "fuck" the most times on live television." Done and done.

HONORABLE MENTION BECAUSE THIS IS POLITICAL BUT TOO GOOD TO PASS UP: Know what's awesome about the first vestiges of the Facebook generation turning into real live grownups? There is a young woman running for the Tennessee House who refers to herself as a "former model," and when she says "former model", this is what she means: 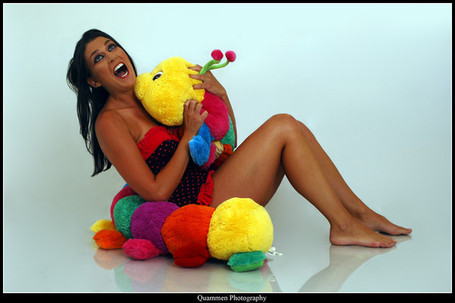 That sound you hear is me kicking myself, hard, for just having registered to vote in Georgia instead.  Whatever your party affiliation, you can surely agree your stodgy Statehouse could use about twelve of her, assuming the stuffed caterpillar is part of the package.

Doug: Carnaval came to an end in Rio last week, meaning the floats have been parked, the decorations have been taken down, and the samba queens have put away their bejeweled pasties and amazing anti-gravity strapless thongs for another year. But those of us who haven't given up booze for Lent can still keep the Carnaval spirit alive with the caipirinha, Brazil's beloved national cocktail: 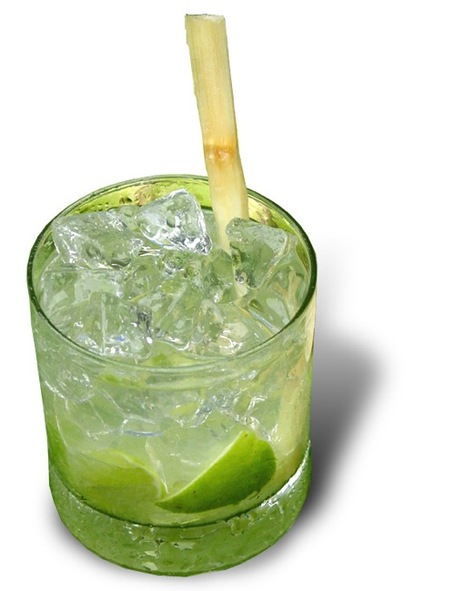 Cut half a lime into four wedges, muddle it in the bottom of a rocks glass with a couple spoons of sugar, dump in the ice, and then add about a shot's worth of cachaça, a liquor made from fermented sugarcane (also known as aguardiente). If you can't find cachaça, you can make the "caipiroska" variation with vodka and lemons. Either one is an excellent way of saluting a nation that, between its fine drinking options, gorgeous beaches, the 2016 Olympics, and legions of supermodel-caliber women, is well on its way to becoming the world's next great superpower.

Holly: This is not itself A Drink, but if you're one of those ice freaks you're going to need to get your hands on the Macallan Ice Ball Machine, which creates those happy solid ice globes to cool your felony fuel from the comfort of your own drankin' lair: 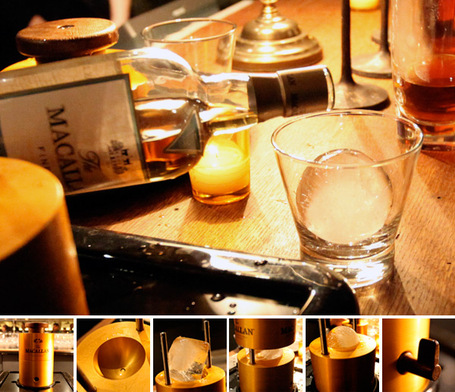 (Excellent pictorial available at the above link.)

Doug:  Allow me to throw my hometown a shout-out here and give a plug to Columbus, Georgia's Dinglewood Pharmacy, inventor of the "scramble dog." 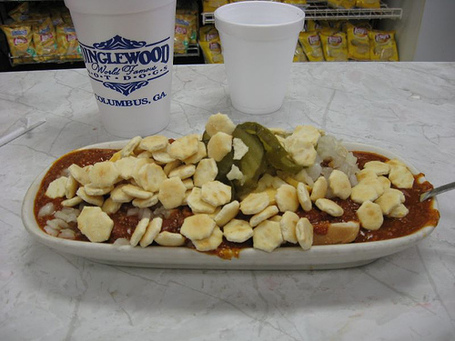 It's basically a plain store-bought hot dog on a toasted bun buried under enough toppings to take it out of the realm of "hot dog" and into that of "redneck casserole" -- chili (with beans and onions), ketchup, mustard, dill pickles, and just for good measure, oyster crackers. Packed with enough calories to last an entire weekend, the scramble dog should probably be approached with caution unless you have the kind of digestive tract that stubs out cigarettes on itself and randomly yells "COME ON, MOTHERFUCKER!" at random passersby. This, AFLAC, and the Springer Opera House are pretty much as good as it gets for Columbus in terms of local claims to fame, but rewally, we could've done a lot worse.

Holly: We're on a bacon bender for the second week in a row, but it's for a good cause, as friend-of-blog and foodie-type Fesser makes a hearty discovery in Benton's bacon:

He makes it in Madisonville, Tennessee, and it's the best thing to come out of the Smoky Mountains since Sherry McAdams. True enough, David Chang did drop a multi-page mash note to Mr. Benton into his Momofuku book, but there are more compelling reasons to get yourself some of this. Food and wine writers like to talk of "terroir," or how a a food reflects local character. Well, eating this bacon is like being adopted by Dolly Parton. It tastes the way your flannel shirt would smell after you and Dolly sat around a campfire and she sang old Hank Williams songs and played guitar. It has a smoky flavor that will immediately ruin you for all other bacon, but not in an oppressive head-in-a-woodstove way.

Holly:  Louisianians will remember the Abita Brewery explosion of January '09, when an overpressurized beer tank blew its top and the roof, to the entertainment of all. (It's all right to make fun when no one got maimed.) 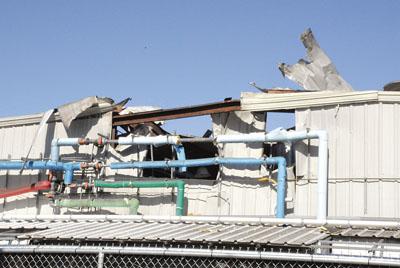 I was cornered by a local at last year's UF-LSU tilt down in Baton Rouge who assured me in complete solemnity that the beer tastes markedly better ever since. I didn't want to argue with the glint in his eye, nor would I put it past anyone I met there to blow up a beer factory in pursuit of better product. I mean this in the most complimentary fashion possible.


Doug:  Yannick Dalmas's Porsche GT1 backflip with a quarter twist certainly wins points for degree of difficulty, but you've still got to stick the landing:

Doug:  The concept of pimping one's ride is not exactly new. As far back as the 1930s, European luxury-car manufacturers would sell you a vehicle and then give you a list of options as to which boutique coachbuilder you'd like to build the body for it; one such car was the Delahaye 135, a French roadster that sashayed down the Continent's autoroutes dressed in the most zaftig sheetmetal ever bolted to four wheels. 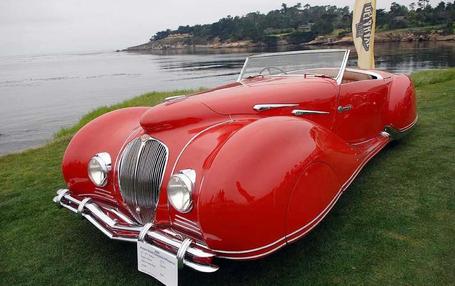 The fun and games pretty much ended once France managed to go and get themselves invaded in 1940, but until then, coachbuilders such as Chapron and Figoni et Falaschi succeeded in turning out the automotive equivalents of Jayne Mansfield -- long, lean, and voluptuous to an almost gratuitous degree, and if you show up at the front door of a hotel or restaurant with one, you can pretty much guarantee that nobody will be looking at anything else.

Holly: An upside-down bobsled.  The official EDSBS contention that all sliding sports would be better if they were just athletes in onesies hurtling down an icy chute without sleds or helmets aside (and maybe on an innertube), traveling in an upside-down bobsled looks like a lot of fun, and thanks to the heinously dangerous track in Whistler, this year's Winter Games treated us to quite a lot of that. 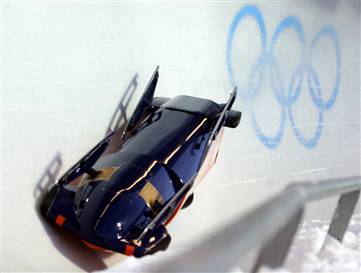 This Olympic pleasure is second only to that one skiier who crashed so hard on the downhill that both her skis came off, only she was already moving too fast to stop herself on the icy terrain and had to slide to the bottom on her ass, hands plaintively folded in her lap and head lolling like Charlie Brown recovering from an attempted kick at the football.

Doug: Two comic hip-hop mockumentaries were released about a year apart while I was in high school. I somehow convinced my mom to take me to the first of the two, "CB4," resulting in perhaps the most awkward and uncomfortable rides home I have ever experienced. The second, 1994's "Fear of a Black Hat," is the one that's actually funny:

A "Spinal Tap"-esque chronicle of the formation, breakup, and rebirth of N.W.H. (Niggaz With Hats), the gangsta-rap trio responsible for such hits as "Grab Yo Stuff," "Kill Whitey," "Guerillas in the Midst," and "Fuck the Security Guards." Ice Cold, Tone Def, and Tasty Taste explain their group's name thusly:

That's what N.W.H. is all about: We got a whole hat philosophy, you know what I'm sayin'? I mean, back in the days when there was slaves and stuff, they would work in the hot sun all day, you know, with the sun beatin' down on them -- hatless. I mean, not even a babushka! Heads totally exposed to the sun. And so by the time they got back to the plantation, from bein' in all the heat, they was too tired to rebel against they masters, right? So what we sayin' with Niggaz With Hats is, yo -- we got some hats now, motherfuckers.

There's a soundtrack album, too, which I highly recommend. Cup your hand, cover up, and grab yo' stuff.

Holly: 10.5.  The spiritual precursor to the Emmerich magnum opus 2012, 10.5 is a 2004 NBC made-for-TV masterpiece that ranks up there with Gone With The Wind in the corners of my mind, thanks largely to it having been released the weekend I had my wisdom teeth taken out. I watched it half-keeled over in bed while sucking on a bloody piece of gauze, but when the drugs wore off, the magic didn't.  Stay with me here: Beau Bridges is the President. Fred Ward is the director of FEMA. And they're leading a cavalcade of That Guys from the annals of must-see TV history to save the United States from ... an earthquake.

And here are the first three minutes of the movie, featuring an EXTREME SPORTS GUY trying to outrun the collapsing Space Needle on a bike, and if you don't love that I don't think we can be friends.   10.5 was followed by a sequel, 10.5 Apocalypse, lovingly referred to by fans as "10.5 The Whole Fucking Planet Cracks In Half."

____________________
That'll about do it for us. Thanks to Dave, Fesser, RCR and our other fly-ass tipsters, without whom this week would have gone much slower and unfunnier and without Ryan Mallett in that cart contraption. Fearless Leader will return in some capacity next week. Stay frosty, all our lawyas, and check all closets and dark corners for inflatable Nebraska mascots before turning in tonight, on account of you just never know.  --HRA & Dolla Bill