THEY SEE ME ROLLIN', THEY HATIN'. The wonky-ass player employed by 5 News makes the video virtually impossible to embed cleanly, but you'll want to click on this link and watch the clip anyway just for the sight of Arkansas QB Ryan Mallett ridin' dirty on . . . whatever the hell this is: 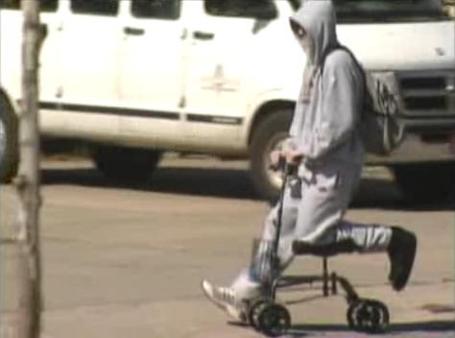 We're not sure what's funnier: Mallett's "paparazzi be houndin' me" slouch, nicely complemented by his shame-concealing gray hoodie, or the reporter excitedly extolling the virtues of the knee-buggy's handbrake, which we're sure works way better than just putting your other foot down and, you know, stopping. The only thing that's left to ask is: Could a Rascal scooter really have been that much more embarrassing?

THE MAN WHO WASN'T SELF-AWARE. This postmortem interview with Kiffykins is jampacked with 150% of your recommended daily allowance of oh-no-he-di-int, so we'll just go with the quote we thought was nerviest:

"I really tried to do the right thing with the media there," Kiffin said. "When you look around the nation, when coaches leave places, they don't address the media at the places they're leaving. They usually talk to their team and they get out of there.

"That kind of backfired on me. I guess I would have done that different and do what everybody else does, and just takeoff."

It's getting to the point where every time we read a quote from Kiffin, we hear it in the voice of William H. Macy's character from "Fargo": "I'm tryin'a do the right thing here! Aww, what the christ!" Actually, come to think of it, when the Kiffykins biopic gets green-lighted 20 or 30 years from now, it'd be kind of awesome if the Coens were tapped to direct. (Steve Buscemi as Mike Hamilton FTW!)

LONG AS SUBCOMMANDANTE WAYNE CAN STILL PARK THE GRAND AM, IT'S ALL GOOD, BEEYATCHES. A whole bunch of Ohio State fans

may be exiled to less-green parking pastures for not paying the hefty "required donation" for their prime tailgating spots, which gives us a feeling that the Columbus PD may be making a hefty pepper-spray purchase sometime between now and the Buckeyes' opener against Marshall.

CAM NEWTON, NEIL CAUDLE, AND 2 OTHERS LIKE THIS. Tyrik Rollison, one of the jewels of Gene Chizik's first recruiting classes at Auburn, is transferring to Sam Houston State, according to his father. The announcement follows a mini-saga of posted and summarily deleted "I'M OUTTA HERE!" messages on Facebook, thus continuing the social networking site's nearly five-year streak of not being anything but trouble for any college football player, ever.

YOU CAN'T SPELL "MOOSE KNUCKLE" WITHOUT THE "U." As for jewels of a completely different sort, Miami's new practice togs don't leave much to the imagination: 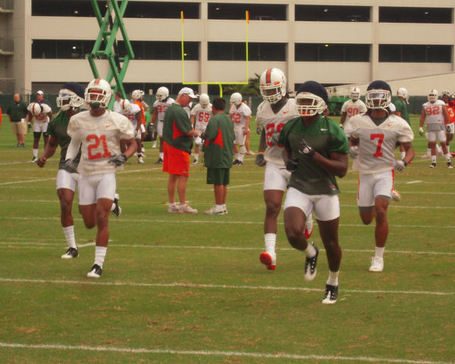 The 7th Floor's Great Barstoolio seems to approve. As for us, we'll simply borrow a line uttered by my sister after a ballet performance featuring a particularly shrink-wrapped male lead: "If I'm sitting in the balcony and I can still count to three when you come on stage, they're too tight."

TO SIR, WITH PUNCHING. Some will shed tears that Kansas State has had to cancel its mixed martial arts course; we simply tip our caps to the Wildcats for ever having had a credit-earning MMA course at all. Kind of sad, though, that K-State's dean of Arts and Sciences is evidently a tougher scheduler than Bill Snyder.

JUST THE GOOD OL' BOYS, NEVER MEANIN' NO HARM. Smoking the rest of the Pac-10 and, indeed, all of Division I-A, the Oregon Ducks are first out of the gate with their 2010 media guide.

ALL THREE HAVE FILED FOR TRANSFERS TO OREGON. Mississippi College is a D-III school and thus ineligible for Fulmer Cup points, but this story of three MC football players getting arrested is worth clicking on just for the mugshots, which comprise a trifecta of awesome. It's like Kool G Rap, John Mayer, and one of the guys from Das EFX formed a supergroup. One that is not very good at selling drugs.

SHOUT-OUT! Bobby Bowden, hittin' that speaking circuit like whoa, "delivered a sermon on family, faith, and football" over the weekend to a Baptist church in the Tampa 'burbs:

Sunday morning, he couldn't help making a joke about retirement.

"If you want to know what it's like to be retired, every day is a Saturday," he said.

But wait, wouldn't Saturday have been Bobby's busiest day of the week? Suddenly the Seminoles' 2009 season makes a lot more sense.