THIS T-SHIRT WAS ALL PART OF THE PLAN, YOU SEE. Spotted last weekend at at a Nashville shopping mall: 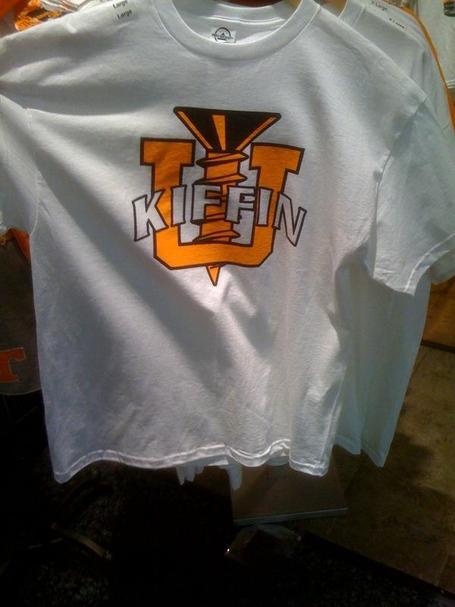 Tennessee may have only finished second in the SEC East last year, but they'll never take a back seat to anyone in grudge-holding, and for that the Vols have our respect.

KNOW WHO ELSE DID "RETENTION BONUSES"? AIG, THAT'S WHO. Auburn University invested more than a half-million bucks in bonuses for its coaching staff after last year's surprise 8-5 run, with offensive coordinator Gus Malzahn getting the biggest boost percentage-wise, a 43-percent bump up to $500K a year. Head coach Gene Chizik, who himself got a nice $200K raise, characterized the hot cash injection as "a pre-emptive strike against rival programs in search of replacements," which is a good plan in theory, but if you think Arkansas isn't going to offer to quadruple Malzahn's salary once Bobby Petrino inevitably ditches Fayetteville for another gig (seriously, people, USA Curling, don't act like it couldn't happen), you clearly don't know how this business works.

AN "UNUSUALLY JUMPY MANNER." In other Auburn news, running back Eric Smith is categorically denying charges resulting from what we can only surmise is the most hilarious party throwdown ever: Smith says Decari Jenkins, the engineering student accusing him of assault, actually started the skirmish by approaching him "with two empty beer bottles, 'holding and clanking' them in a threatening manner." Who knows, maybe this is what passes for a show of force in Auburn these days. Smith's attorney, though, does have the last name Strength, meaning Jenkins tangles with him at his own risk. 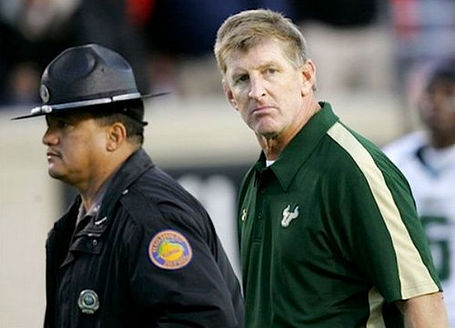 Oh, sure, you laugh now, but Ponch here has my back.

VERY NICELY SPOKEN, SON. I THINK I'LL LET YOU LIVE. A Florida state trooper assigned to former USF coach Jim Leavitt's security detail has stepped forward to say that Leavitt did not strike or choke walk-on Joel Miller during halftime of last season's USF-Louisville game. We like to think that trooper Benny Perez made this statement in a quavering voice while Leavitt stood behind him casually slapping a baseball bat into his palm, but then we're melodramatic like that.

PARENTS OF RALEIGH, COVER YOUR CHILDREN'S EARS. Former Notre Dame DC Jon Tenuta, fresh off presiding over a season in which the Irish defense dropped from 39th in the country to 86th, has landed gently as the linebackers coach at N.C. State. In Raleigh, he will at least have the advantage of not being able to make Mike Archer's D much worse than it already was -- the Wolfpack gave up an average of 441 yards per game in ACC play, including a home date against Duke in which the 'Pack bent over and spread their cheeks to the tune of 502 total yards. But Tenuta brings salty language and a name that's fun to say, which in the end is all that matters.

YOU'LL CHANGE YOUR MIND WHEN KIDS START WALKING AROUND WITH GOTHIC-SCRIPT "DUCK LIFE" TATTOOS. Not that we don't understand, and sympathize somewhat, with the the sentiment behind this editorial from the Oregon student paper decrying the Ducks' recent rash of off-the-field issues, but look at it this way: Fifteen years from now, when the recruiting class of 2025 is being wowed by a rowdy ESPN documentary called "The O" and thinking, "Man, I'd like to get in on that," you're going to wonder why you ever got so worked up over this.

BADGERS? WE DON'T NEED NO ESTEENKING BADGERS. Bret Bielema has indefinitely suspended three of his freshmen players -- Kraig Appleton, Shelby Harris, and Nick Hill -- for unspecified violations of team rules. Appleton obviously got whacked for spelling his name with a K; we're still trying to find out what the other two did.