HAIL THE DARK PASSENGER! Fearless Leader Swindle has an announcement of some import: 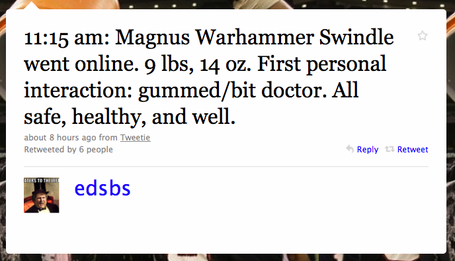 What does this mean for you? First, that you're in the supple hands of Holly and Doug this week; tips happily accepted at wolfbearclownshark-at-gmail and heyjennyslater.blog-at-gmail, respectively.

Second, that it's time to fill that comment thread with scads of well-meaning/overbearing advice for the new parents. Have at it. And on to business, after the jump:

AIR RAID OFFENSE, TIME OF DEATH, 12:14 A.M. First Tommy Tuberville said he was going to dial back Texas Tech's formidable passing game to protect the quarterback. Now Tuberville's offensive coordinator, Neal Brown, is described as indicating that "next year's Red Raiders might need to know as few as a dozen plays - three or four runs and six to eight pass routes." This, of course, is Tubervillese for "Punting is winning," and a sign that Brandon Cox and Daniel Cobb are just weeks away from being hired as co-QB coaches in Lubbock.

"CHARACTER, SOUND JUDGMENT, WHATEVER. CLICK-CLACK." Parents across the South Carolina upstate will soon have a chance to see their kids' impressionable young minds molded by one of college football's legends now that South Carolina head coach Steve Spurrier has joined the "Coaches 4 Character" team. Presumably the Ol' Ballcoach will be stressing the finer points of good sportsmanship, like continuing to launch long bombs when you're already up by four TDs so that the other team doesn't think you're taking it easy on them, and offering relevant life-planning advice like not wasting valuable QB-development time on boring stuff like grooming a running game or an offensive line or anything pointless like that.

ATHLETES ON FACEBOOK, BROUGHT TO YOU AS ALWAYS BY BAD IDEA JEANS, LTD.  Oregon WR Jamere Holland has some thoughts about the disciplining of teammate Kiko Alonso, arrested over the weekend for drankin' and operatin'. Chip Kelly has some thoughts about Jamere Holland. You can guess how well this ends, and a Fulmer Cup tally is forthcoming, but in the meantime enjoy this student reaction shot: 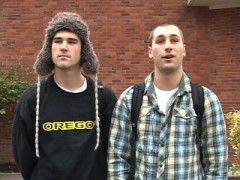 (There's an accompanying video, but that screencap really sums it up beautifully.)

HE'S ALSO A BIG FAN OF THE SCHOOL FIGHT SONG, "GLORY, GLORY TO OLD GEORGIA TECH." Paul A. Norman of the "Georgia Tech Yellow Jackets Examiner" is pretty confident that Paul Johnson is sticking around at Tech for the long haul. Among the many reasons he gives? Apparently one of Johnson's catch phrases is "Finish the drill." Whatever bad blood may exist between the GT and UGA programs, we think that's the kind of originality and work ethic that even Bulldog fans can applaud.

DAVID CUTCLIFFE IS BUILDING AN ARMY. ONE THAT CAN MOVE IN SUNLIGHT, AND TRAVEL GREAT DISTANCE AT SPEED. Arizona State's recruiting coordinator is decamping for Duke. We care because he's the guy who brought Vontaze Burfict to Tempe, and thereby plays a part in this hit having come to pass:

WHAT'S THE SOUND OF THE SMALLEST VIOLIN PLAYING THE SADDEST SONG IN AN EMPTY STADIUM? "Jeff Brinson's rushing total at Iowa will forever read one attempt for seven yards."