OLE MISS STUDENTS TO VOTE ON MASCOT. YOU KNOW THE RIGHT CHOICE AND IT'S A TRAP

Share All sharing options for: OLE MISS STUDENTS TO VOTE ON MASCOT. YOU KNOW THE RIGHT CHOICE AND IT'S A TRAP

Ole Miss has operated without a proper mascot for quite a while now, something that may or may not continue pending the results of student election next week on the 23rd. The election will decide whether Ole Miss continues operating with the single mascot they have now, an animated, wildly gesticulating character named "Houston Nutt" who plays the part of "their football coach" (wink wink), or whether to adopt a second mascot besides the guy who thinks he's telling everyone what to do on the field.

Colonel Reb is not an option, but even if you could Ole Miss students...you know who the real choice is here. 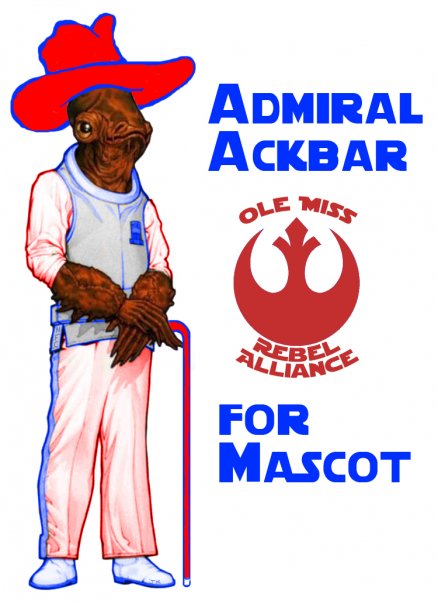 What better summation of Ole Miss's spirit than Admiral Ackbar, who like Ole Miss is surrounded by talent in the form of a huge JUCO system/ Han Solo and company, but still manages to get himself cornered in the vastness of space/stuck with Ed Orgeron as your head coach every now and then?

Like the residents of Mississippi, he has gills and wears a uniform at all times. Like the residents of Mississippi, he likes alcohol to excess and has relatives who can't read. Like Mississippi, he has had an ugly personal experience with the issue of slavery, having been enslaved with the rest of his people when his home planet of Mon Calimari* was invaded by the Empire. Finally, and most importantly, HE'S A LEADER OF REBELS. One who every now and then gets to blow up the Death Star, as they have done with Grand Moff Meyer and will likely do again.

Join the rebellion here, or on Twitter, or on his Facebook page. IT'S A TARP! A tarp that will cover the entire Ole Miss campus with a protective shield of love and reconciliation, people. Let's start spreading it and give the Rebels the mascot it deserves. Many Bothan spies have died just to get us this far. Don't let their deaths be in vain.