ALPACAS OUT OF NOWHERE.  In addition to Ryan Mallett missing spring practice due to a broken foot, other roster shuffles, the random alpacas of children's rugby games continue to fly into the well-planned spring practices of large, well-funded D-1 football programs. ALPACA LOOK OUT! 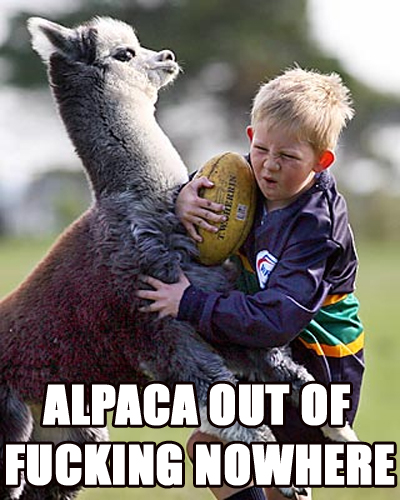 Miami's Jacory Harris will miss spring practice due to surgery on his thumb last month, which was expected but is now official with the U's release of players not participating in practice due to injury. More random alpaca-type thing: the sudden dismissal of senior LB/safety Elijiah Fields from Pitt, who as Chas suggests was "too dumb to succeed" despite NFL-caliber talent. A quick review of his TwitPics shows a City Boyz, Inc.-style array of cash, confirming that he might, indeed, be too dumb to succeed because a.) THAT MONEY BELONGS IN A BANK, YOUNG MAN! and b.) the pics of stupid money stacks are still up on his TwitPic page.

FOUR YEARS AND ONE LANE KIFFIN LATER: USC finally goes in front of the NCAA for the Reggie Bush casetoday, and will after the hearing take somewhere between 6-8 weeks to make its findings known to the public because they are unholy teases and real motherfuckers for exact margins. They're also font freaks, and as always we suggest publishing the entire thing in the most dignified of fonts, CURLZ MT.  It was good enough for the Magna Carta and surrender papers for the Japanese in Yokohama, and it's good enough for vacating wins and letting USC off by punishing imaginary people in the past who no longer exist.

Pete Carroll will be on hand to support the university, and to clap and exhort USC's representatives along. If Reggie Bush pulls the fire alarm during the hearing, he will see nothing. Pete Holiday has a primer from an Alabama fan's perspective, and the summary sentence contains the operative phrase re: the NCAA's use of power: "occasionally baffling." And if you want an expert here, for better or worse, it's an Alabama fan.

NICE EFFORT [INSERT DIGITS HERE]. Turner Gill has taken the names off the back of KU's jerseys for spring practice, a move emphasizing team unity and the importance of working together. It's also nice for the players since they no longer have to put up with wearing the Mangino-era jerseys with "Future Jailhouse Bitch," "Dad Couldn't Beat Cancer," and "SonOfAMethWhore" on the back.

INTRODUCING YOUR NEW FRIENDS OF UGLY. The one thing new DC Teryl Austin and returning RB coach Stan Drayton have in common is a good working relationship with OC/Interim head coach Steve Addazio, meaning the review of new coaches here is further proof of Addazio rising power and influence in hiring. (SLAMS HAND IN DRAWER.) Also included is confirmation that George Edwards' departure was an open secret around the Gator offices, something reflected in recruits' comments about him not being particularly involved in recruiting during his single, unremarkable month in the job. HURR FLORIDA DONE LIED TO RECRUITS AGIN.  Possibly, though the hiring of NFL-type Austin is at least a sop for those recruits who liked Edwards' NFL cred. We never said we were trustworthy. We just said we'd get you to the NFL. Maybe. Hey, look over there! (Recruits rising five-star rising senior at your same position without telling you.)

VANDY RECRUIT SHOT, KILLED. Your senseless news of the day.