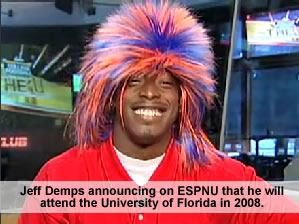 SO THAT'S WHY MY CLOCK IS RUNNING A SECOND SLOW. Running back Jeff Demps, last seen stretching his elbow in unnatural fashion on the field at the Sugar Bowl, ran a 6.59 in the 60 meters at the Tyson Invitational in Fayettteville, Arkansas. The time is the fastest in the nation, and beats Demps' personal best of 6.61. Our running back is a potential Olympian sprinter who wears colored wigs to make important announcements before making the earth turn backward because he messed up his DVR and needed to go back in time to catch his favorite show, Hoarders. Life remains good.

THE PEOPLE'S COURT. USC will face a tough room when they go in front of the NCAA to defend themselves. They may have to say words! Please note that no one and none of the cases mentioned in the article really added up to any real trouble for the programs involved, but don't let that stop you from comparing this to gripping television drama.

The hearing "is not 'Law and Order,' " Memphis' Johnson said. "You don't jump up and down at each other. You get your chance to say, 'That's not true,' but you don't ever want to interrupt them while they're talking."

This being USC, they will actually have Sam Waterston stroll in to defend them, and he will get whatever he wants because Sam Waterston does nothing on that show but demand mixed cocktails from important judges in the middle of tense trials (and gets them promptly.)

TIMING IS EVERYTHING. It was upwardly mobile, more money, and in a bigger television market, but on top of all of this it didn't help that Skip Holtz was going to have the fewest returning starters in the nation returning to his ECU squad when 2010 rolled around. Brian also parses out a fact you'll be citing in one direction or another no fewer than three thousand times this offseason--Alabama returns the fewest starters in the SEC--and mentions that USC has 12 starters and a coach who "may, in fact, be brain-damaged." No qualifiers necessary there, MGoFuhrer.

LACK OF HOSPITALITY NOTED. If Mike Bianchi is calling Florida State the 'least media-friendly program in Florida"while the Belichickian regime in Gainesville refuses to confirm visible compound fractures on the field, then Jimbo Fisher's got things on Stalinist lockdown in Tallahassee.  As long as he doesn't muzzle TWITTER WARRIOR COME GET SOME James Coley or do something crazy like learn how to call plays in the red zone, we're fine with whatever Jimbo wants to do.

WE'RE NOT CHANGING A THING EXCEPT WHAT WORKS. Tubs is just protecting the quarterbacks, y'all.