FEB. 16, CHICAGO, IL (AP)--The Big Ten announced today that it has extended an offer to the nation of Brazil to join the Big Ten Conference in 2011.

"The Big Ten needs to expand and change with the times, and what better way to do it than by inviting the dynamic, multi-ethnic, and most importantly very warm nation of Brazil into the nation's finest athletic conference," said Big Ten commissioner Jim Delany in his announcement at the conference's offices today. "We thought about it this very carefully. This did not happen overnight, and most definitely did not happen in a conversation between myself and Brazilian Minister of Sports Orlando Silva after a steak dinner and six caipirinhas last Thursday on Ipanema Beach."

"I repeat. That most definitely did not happen." 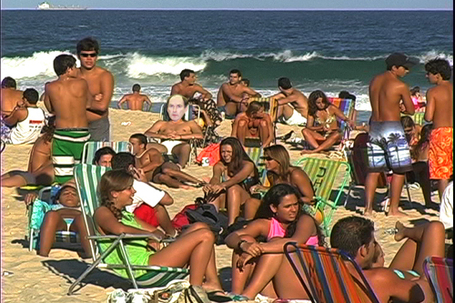 The Big Ten has been investigating the possibility of expansion since 2009, according to most sources, but the offer to Brazil comes as a shocking surprise to experts familiar with the situation.

"This is a real splash for the Big Ten, a total game-changer," said Stewart Mandel of SI.com. "I thought they would think out of the box, but not even relying on the framework of a university for your twelfth member? And nominating a country with no football to speak of?"

Previous candidates for expansion had been Pitt, Texas, Nebraska, Colorado, and Kansas.

"This could be almost as revolutionary as the 2000 Northwestern/Michigan game," said Mandel.

The announcement provokes many questions for Delany, one of the most powerful men in college football and a commissioner noted for his conservative leanings in a college sports world heading full speed to the future. He attempted to answer some of those in his press conference, most specifically the question of what the conference and the nation of 192 million had to offer each other.

"Brazil is a burgeoning market for the Big Ten's strong mix of academics and athletics, a place where we think we can find the next generation of great student-athletes amidst their shining beaches, covered with an ample supply of improbably manicured and toned beach bodies, their curvaceous buttocks soaking in strength from the powerful sun, the sun that comes out Jesus, what, more than once every goddamn month, the sun that smiles on the finest pieces of woman flesh in the world, women that make you feel young again, dammit, like a man who has dreams and things to do and a fine woman named Isabela who understands him and wants to do it more than once every six months and--"

He composed himself amidst a room of quiet reporters and floodlights, but then continued.

"--a place with music, dammit, real live music that made your heart sing? A place with electricity like the kind you let your hands wrap into the two sweet dimples at the top of a woman's ass for the first time? A REAL WOMAN, I ASK YOU? A place where people just live, not planning and plotting and having to warm the damn car up before you drive to your heartless job that sucks the life out of you, a place where there's no hot dish or snow, just sand, and heat, and wild nights with rum and no pants and, yes, the occasional murder in the street? But that's the price of passion, you know? You can't love without a heart, and a heart needs blood, and sometimes you get that blood by spilling it in the street, and sometimes you get it with a long weekend naked in a hotel room with the single most intoxicating, insatiable woman you--

"AHEM. In return, we can offer them all the resources the Big Ten has to offer, as well as Rotel Cheese Dip and Barbasol shaving cream for life." 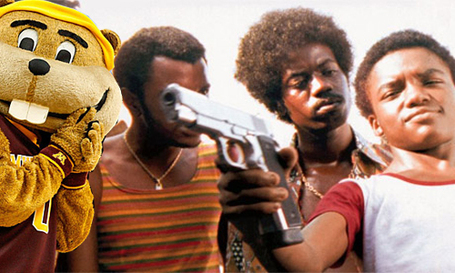 Goldy the Gopher visits a favela during last week's research trip undertaken by Jim Delany to Brazil. He has not been seen since.

"All operations will be moved to Rio de Janeiro immediately, and all press inquiries addressed to Room 183 at the Hotel Ipanema."

Delany then left the room. He took no further questions.

Delany's somewhat disjointed remarks claiming the move was "calculated" differ from other accounts of the move, however.  Sources inside the Big Ten say the move happened quickly, and without much consultation from outsiders.

"It was like he just wigged out last Tuesday, left the office on 'a research trip,' and just came back on Monday and was like, 'It's Brazil.' It was so out of character. He still reads the newspaper while taking a shit in sock garters at 10:05 a.m. every morning. I know because he makes me go in there with him and take dictation."

"I mean, do you know how much a plane ticket from Madison, Wisconsin to Rio costs? And what Wisconsin fans would do once they got there? There are some problems the American Embassy can't fix."

Longtime ABC broadcaster Brent Musberger believes the move will be a successful one.

"My man Delany knows what he's doing for sure, pardner. You want out of the box? He's out of the yard, friend, and you're going with him. You ever been to Porto Alegre? They know how to treat a man there, especially one who resorted to exotic animal smuggling in the late eighties to make ends meet. They know a good time, they know good food, and oh brother do they know how to have a good time, if you know what I mean."

"They could pack a Golden Tamarin Monkey into a shaving kit like no one else, let me tell you."

Delany did not return phone calls or emails Tuesday afternoon. He was seen throwing his tie down in the parking lot and peeling out of the parking lot of the conference offices before driving away at an extremely unsafe rate of speed.