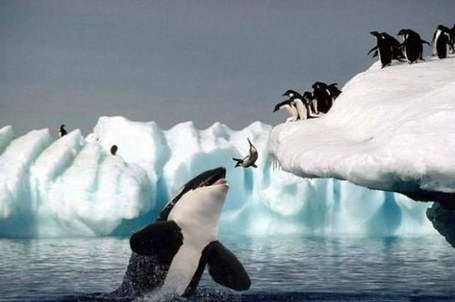 "Cody Feeds." We're sure it's a moving interpretive piece, an allegorical stretch from Moore's more typically prosaic depictions of great moments in Alabama history. The penguins are Tennessee players, since like Tennessee fans they mate for life, lay eggs, and waddle awkwardly on dry land. Have you seen them in the water, though? Like herring-killing torpedoes, they are. Will eat the bait right off your hook if you're not careful, as well as the box of fried chicken you leave too close to the boat railing. A minor piece entitled "Maximum Block" is also available, and commemorates Lane Kiffin's victory over Alabama in a 14-12 loss last year.

USC WILL GET THE DEATH PENALTY AND WILL BE RAZED TO THE GROUND BY THE NCAA'S PRIVATE SECURITY FORCES.  USC really is about to plead collective Alzheimer's not just on the Reggie Bush case, but also on the O.J. Mayo case, which while not comparable in terms of dollar amount of benefit involved is certainly more openly brazen. (Hard to beat cash getting handed over in front of witnesses.)  It could work, too, especially since the NCAA is too busy doing MUMBLE MUMBLE MUMBLE--

/waits for CBS check to clear

--and yeah, there are rumors. Elaborate, insane rumors, which is what the internet is for in addition to kitty pictures and heinous gifs of things flying into the World Trade Center. (If it's on the internet, 4chan has it flying into the World Trade Center. Guaranteed.)  None of it happens until it happens, which Cynical Orson says won't ever happen, and realistic Orson says is as likely as catching a snowflake not made from the ashes of a burning building on your tongue in Port-Au-Prince.  The important question remains: has Ed brought the infamous whiteboard back yet?

FURTHER CONFERENCE OBESITY WARNINGS. BHGP says Kansas would be a tantalizing option for the Big Ten, and why the hell not: they've got way more money than you think, offer a bonafide behemoth on the basketball side, and would be another choice better than anyone they could pull from the zombified Big East.

Looking at football, yes, poaching half the Big XII North might seem, on its face, to be a little underwhelming. Perhaps. We'll just remind you that the Big 10's other alternative for expansion is the Big East, and Big East football makes the Big XII North look like the Bionic Steroid NFL.

The continued viability of their football program isn't a given, but that's not really what you're going after with Kansas. If Turner Gill can continue the considerable momentum of the Mangino era (FAT PHYSICS JOKE) in football, that's pleasant, but KU basketball would be the scalp they're going after there. Bring on the Cats points out that in losing the Denver market, the Big 12 loses way more than you're perhaps thinking about in terms of viewers.

YOU MAY THINK YOU'RE HARDCORE BUT YOU'RE NOT CUTCLIFFE-CORE.  Duke has already started spring practice. You ain't hard like David Cutcliffe, son.

MONSIEUR GABBERT SUFFERS A TRES GRIEVOUS ASSAULT. Mizzou freshman quarterback Tyler Gabbert had his nose broken in a fight around 1:30 a.m. on Saturday in Columbia this Saturday. Don't shit leisurely-like in Columbia, son. People round her value their time, and don't prefer to do it all lackadaisical like.

The police report said the disturbance, to which officers were called shortly before 1:30 a.m. Saturday, started when one of the unidentified men complained about one of the players taking too long to use the rest room.

Bear down and finish the drill, son. Gabbert may have to have surgery to repair the damage, but after watching his brother getting beaten weekly behind Mizzou's line last year, Monsieur Gabbert the Younger scoffs at your assault, pulls off his lacy glove, and slaps you in defiance of your mere "violence," sir.