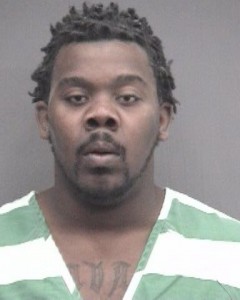 As far as Florida mugshots go, this one is a classic. The bored, lackadaisical look reminiscent of heroin-chic era photography, the visible chest tat, and the green and white striped Alachua County Jail togs all meld to make a striking visual experience for the mugshot aficionado. Not pictured: the one woman Brown allegedly slapped at The Crossing apartments in Gainesville who was trying to get people at a party out of the apartment, or the one he scratched while holding up his arms to fend off her counterattack.

(Note: if said second woman is a 7 or above on the Conventionally Accepted Attractiveness Scale, and did not use a weapon, and still jumped in to fight a 300 pound defensive tackle, that's automatic marriage material. Sisu in spades and proven via police report.)

If nothing good happens after midnight, then nothing not resulting in an arrest happens after six in the morning: the arrest took place at 7:28 a.m., with Brown facing two cases of misdemeanor battery for the incident with no comment from the Florida coaching staff yet. Two misdemeanor charges get a point each in the Fulmer Cup, but Brown's idiocy and affiliation with this blog's team of stated affiliation get a bonus point. Florida debuts with three points in the Fulmer Cup, and no, his co-defendant's fire extinguisher theft charges don't count unless the unnamed man is revealed to be assistant coach Chuck Heater on the wildest Sunday morning of his life.

The arrest is at least the 27th of the Urban Meyer era. This sentence is required to appear by federal law with any story about the Florida Gators and legal issues with their football team.

SOURCES TELL US HE WILL BE CHARGED WITH TRIPLE DOUBLE SEXY MURDERCIDEARSONERY. The Jeremiah Masoli case is, according to "sources," headed for review in front of a grand jury. To review: the Oregon QB and WR Garrett Embry, according to fraternity bros just chillin' at their casa, stole a laptop and several other items from their pussy trap and then vamos'd from the premises. Later, these bros would call Masoli and Embry "hood rats," and thus set back the public image of open, loving bros everywhere. Disapprove, bros.

This bro-foul does not change the basic facts of the case, or that this may be the rankest of internet rumors. Since Bro Brooks did not see fit to include the standard obligatory bikini shot of a girl in a bikini or revealing costume as is custom, we include one for your viewing pleasure. 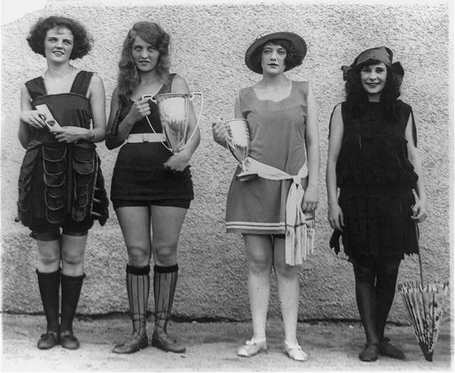 ROWR! NO ONE DID BATHING SUITS LIKE THE LADIES OF THE 1920s!

MONEYBATHS SEC Defensive coordinators now exfoliate with the luxurious feel of real American currency, but may insist on being paid in Euros, cause this cash shit leaves me poor in St. Moritz, feel me playa?  Ellis Johnson became the fourth SEC DC paid in excess of $700K after only one DC made more than $700K last year. (Tennessee's Monte Kiffin, who is still coaching at Tennessee in the second year of the glorious and endlessly successful Lane Kiffin regime.) Florida has not announced contract terms for new DC Teryl Austin, but his salary number will be nowhere close to that sum since he has not done the job before ever anywhere and is only a middling pro DBs coach, but Steve Addazio sure likes him a whole lot so sure.*

Still, the point stands: moneybaths for all if you can coach a competent base cover-2.

THAT'LL TEACH YOU TO TALK SHIT ABOUT TERRY SHEA. Don't talk about my dad like that, because I will ill-advisedly defend him without concern for my IP address.

YOU MIGHT BE INTERESTED IN THIS RECRUIT. HIS SKILLS INCLUDE TRAILING PLAYS LATE AND GETTING BLOCKED.  Mike Nobler's recruiting highlight tape is the new Sam McGuffie blast track OMG!!! Nobler, the video coordinator at Nebraska, slipped his own EXTREMELY IMPRESSIVE highlight tape into the mix of Nebraska's 2010 recruiting class tapes, and even added narration for added comedic effect. Warning: showing this tape to Ralph Friedgen may cause him to offer Nobler a scholarship out of sheer awe at his slows.

Cheers, Mike Nobler. April Ludgate approves of your slipping free comedy into the margins while no one's looking.