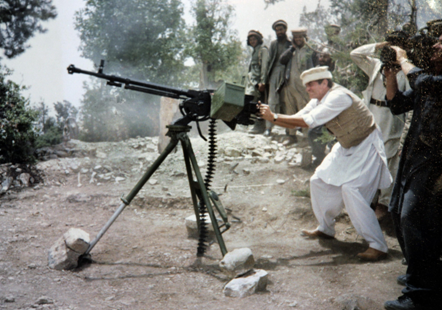 It was a bad weekend to be an awesome old dude who shook his fist at contrary gods, poured himself another drink, and then went about his business no matter the weather. First, Captain Phil from The Deadliest Catch, who somehow suffered a stroke after a healthy diet of sleep deprivation and five hundred cigarettes a day, died after feeling good enough in recovery to remind his doctors "not to fuck it up." RIP, Cap'n Phil. We will miss you yelling at your sons, and then crying alone with the camera in the cabin talking about how much you love them.

The bigger death, historically and stature-wise, was the death of the superlative vagina wrangler, whisky-carrier, bon vivant, and enemy to husbands and sobrieties wherever they lay known as Charlie Wilson. Wilson's astonishing resume of mandom includes feats of difficulty so beyond the realm of our mortal understanding that an extended look at these bullet points may blind you with its glory.

"You can teach 'em to type, but you can't teach 'em to grow tits." Unrepentant to the end, Charlie made it to 76 before the part ended, and sure, he'd made mistakes. He almost killed a congressional intern, yes. He inadvertently contributed to the mayhem labeled on a map as "Afghanistan," true. He undoubtedly ruined countless women for other men with his sourmash-powered Texan lovemaking on leopard print rugs with "Love, Look What You've Done To Me" playing in the background.

But if you go through life without accidentally destabilizing an entire geopolitical region while setting unattainable standards of sexual performance for other men to weep at...can one really and truly even call that living? We think not, and thus choose Charlie Wilson, the man whose words in a time of trouble are those to live by:

"I won't blame booze and I won't suddenly find Jesus."

Cheers, Congressman Wilson, for going out as you came in: looking for a pair of tits and a drink in the same place.

In my ongoing quest to become the unemployed, living-with-my-parents version of Don Draper from "Mad Men," I've been making a concerted effort to step up my drinking game -- not necessarily quantity, but quality. No more cheap-ass beer, no shooters, no liquor from a brand that primarily uses a sans-serif font on the label. And my current cocktail of choice is a simple, non-embarrassing drink designed for real men and the women smart enough not to fall for any of their bullshit: the Manhattan. 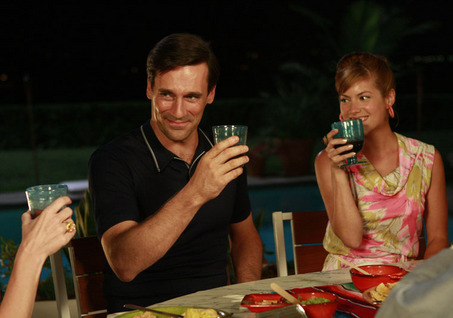 Three parts whiskey (or thereabouts), one part sweet vermouth, dash of bitters, stir over ice, serve straight up, boom. You want to do it the way Sinatra did it, use rye whiskey, but otherwise let your conscience and your taste be your guide. And if some dumb sorority girl asks you if you're drinking a Cosmo, tell her she's in the wrong bar, T.G.I. Friday's is down the street.

Orson: Bell's Anything. We've never been to Michigan, but now have a reason to go besides the Robocop tour of Detroit we've always wanted to do. One van, a shitload of bungee cords and padding, and a credit card will accompany us to the Bell's Brewery, where we will buy as much beer as can fit in the van and drive it southward like a coke dealer in reverse. The Two-Hearted Ale has this description:

"Hemingway-esque" in that you will begin fishing, and then drink like your quarry after an hour or two of ingesting their fine, fine bottle-born crack of a beer.  The Double Cream Stout is fantastic, as well, and you should drink anything they offer you even if you suspect it's antifreeze, because even if it is antifreeze we suspect it would benefit you in the long run. If there beer is any indication, they either always have your best interests at heart, or this is all part of some vast plot to enslave the world with their product. I suspect the latter, and still do not care.

Orson: Red Velvet Cake. It's not hard. In fact, the recipe comes with the ease one can only properly find in the white/black trashiest of recipes, usually cribbed straight from the Rural Diabetes Training cookbook. Take Chocolate Cake mix, add an almost unsafe amount of red food coloring, and smother in cream cheese frosting, and IT'S GOIN DOWN, Y'ALL. 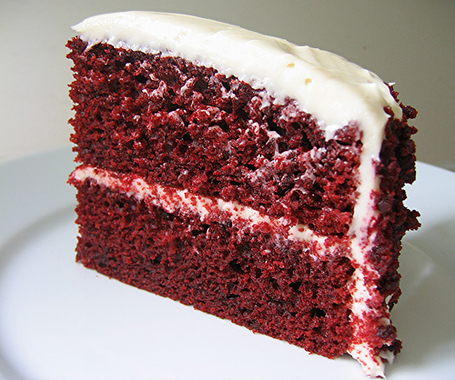 What gives red velvet cake its allure is the redness, though, which you can taste even if you know damn well it doesn't exist. As you're eating it, something in your brain won't shut off the stupid, giddy voice in your head saying "WOW YOU CAN REALLY TASTE THE RED!" It's the same childlike moron quadrant of your brain that lights up when you get a Blue Hawaiian,  a purple shooter, or green beer on St. Patrick's Day. Additionally, getting red velvet cake means you're about to get a nap, since it usually came with barbecue, fried chicken, or on those real artery-straining days a bit of both, and you are therefore about to fall into a mild diabetic coma after scraping the icing off your plate with your finger (not only permitted, but encouraged at this table, child.)

Doug: "I'm from Virginia," Clipse once said, "where ain't shit to do but cook."

I was born in Virginia, it's a beautiful state, and I love it, but Pusha T was right, about certain parts, at least. My first job out of college was at the daily newspaper in Lynchburg -- which, if you'll recall, is the home of the late Jerry Falwell's church and Liberty University, which he founded. So needless to say, this was not a hotbed of any kind of activity someone in his twenties might describe as "fun." Typical Saturday for me: Go to the Texas Inn, pick up a couple Cheesy Westerns,  grab a six-pack on the way home, and plant myself on the couch watching football, not calling it a night until everything had been consumed.

"Wait, wait, back the fuck up to that first part. What the hell is a Cheesy Western?" Glad you asked: the Cheesy Western is the signature item at the Texas Inn diner (known to the locals as the "T-Room"), and it is diabolically beautiful in its artery-infarcting simplicity -- a burger with a slice of cheese, hot onion relish, and a fried egg on top. I can't adequately describe the taste except to characterize it as the culinary equivalent of nailing a Russian mobster's mistress: a decadent, somewhat trashy encounter that will almost certainly result in great harm to your physical being, but at least you'll go out with a smile on your face. Ain't shit to do but cook, indeed.

Doug: When the stuff that's cluttering your lawn is not leaves but old cars -- I lived in Alabama for seven years, I know a little bit about this -- a standard-issue leafblower just isn't going to do the job, is it?

Orson: Designed for hunting big game in Africa, firing a bullet the size of a Hebrew National, and generating 10,180 foot-pounds of muzzle force...the .577 T-Rex, and the shoulders it breaks.

Cloverfield would have been a digital short if someone in the movie had thought to bring this gun along. 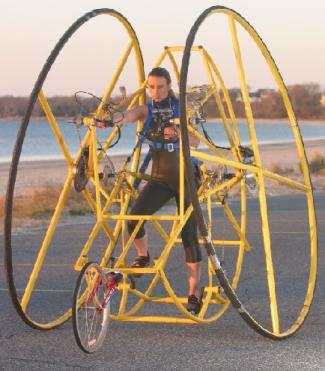 It goes fifty miles and hour and would scare the living fuck out of anything around you. Naturally, I want to take it on I-75 during rush hour while wearing a Hamster costume and pedaling furiously.

Doug: Car and Driver magazine invented the "Boss Wagon" nearly a half-century ago by convincing Chrysler to cram their biggest engine into a boring old Plymouth Fury station wagon, just to see what would happen. That wolf-in-soccer-mom's-clothing concept seems to have found a niche -- you can now buy a 500-horsepower ML-class SUV through your local Mercedes dealer, and in Europe you can buy an Audi wagon with a V10 engine even more powerful than the one in the R8 supercar -- but it truly went mainstream with the Volvo 850R wagon of 1996. High-pressure turbo, 240 horsepower, zero to 60 in under seven seconds, all the better for making sure the other cars at the stoplight get a real good look at the "War is Not the Answer" sticker on your back bumper. Yet it retained Volvo's traditional Lego-brick-on-top-of-another-Lego-brick styling, such that as long as you restrained yourself from ordering the lemon-meringue yellow paint seen above, you'd remain virtually invisible to cops. When your kids absolutely, positively have to get to their piano recital on time, accept no substitutes.

My favorite exchange in all of cinema, courtesy of (who else?) Monty Python:

If you're preparing to leave a big indignant comment about how "The Life of Brian" ridicules Christianity, you're training your guns on much too narrow a target: "Brian" satirizes the entire concept of organized religion, and takes shots at ineffectual "activist" groups, out-of-touch politicians, and the herd mentality of modern society in general. Might just be the funniest movie ever made, and no, I haven't forgotten "The Holy Grail." If for some reason you don't have this in your DVD library yet, get it, and remember: The Bible isn't meant to be taken literally, so "Blessed are the cheesemakers" applies to makers of all dairy products. 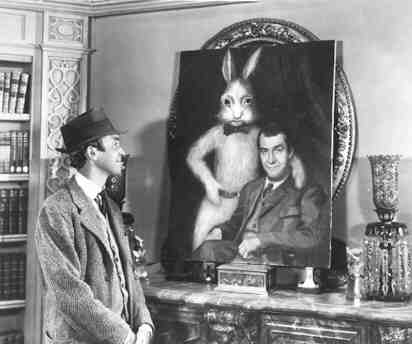 Did you really just watch a sixty year old movie about a man who may or may not be friends with a giant, six-foot-three rabbit named Harvey? Or did you just decide blotter acid wasn't cutting it today, and went and tapped the freon in your air conditioning unit, too, and then passed out on the couch and made this all up in the most genial drug nightmare ever? As insane as it sounds, Harvey makes a tremendous amount of sense once you watch it, especially since the screenplay contains some of the most beautiful, off-kilter dialogue of its time;

Harvey and I sit in the bars... have a drink or two... play the juke box. And soon the faces of all the other people they turn toward mine and they smile. And they're saying, "We don't know your name, mister, but you're a very nice fella." Harvey and I warm ourselves in all these golden moments. We've entered as strangers - soon we have friends. And they come over... and they sit with us... and they drink with us... and they talk to us. They tell about the big terrible things they've done and the big wonderful things they'll do. Their hopes, and their regrets, and their loves, and their hates. All very large, because nobody ever brings anything small into a bar. And then I introduce them to Harvey... and he's bigger and grander than anything they offer me.

Like Donnie Darko, but with a real rabbit, a happy ending, and without all the wormholes.