Share All sharing options for: TODD MCSHAY DRAFTED BY TEBOW IN MANCRUSH DRAFT

Todd McShay has been particularly vocal in his critique of Tim Tebow's prospects as potential NFL quarterback, something we here at EDSBS have no particular problem with overall. We lovingly refer to Tim Tebow's throwing motion as "the Frittata," a fluffy whisking of the ball from hip to knee to hip and then to the shoulder that takes 3.6 seconds in total and carries the ball on a round trip of 14 meters. It's the Monarch Butterfly Roundtrip of throwing motions, and like the Monarch's long trip it both worked at a certain level. 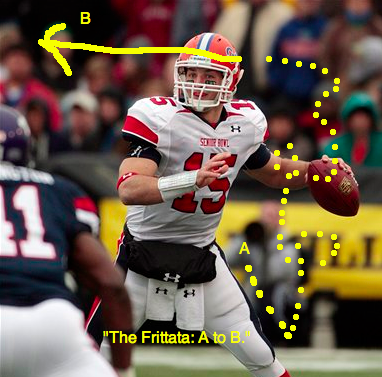 It won't at the pro level without serious modifications from the floor up, which is why we hope for Tim's sake he's drafted by the Dolphins in their continuing attempt to bring college playbooks to the pros. (Plays which, no matter the formation or play, are all referred to as "the Wildcat" by NFL announcers.) In the meantime you get to listen to Todd McShay say things like the following about Tebow:

"He couldn't piss on a turd in a hot shithouse."

"He should be raped by Cossacks for even showing up and attempting to play quarterback in the NFL."

Has difficulty taking snaps from under center, and is baffled by simple reads.

"Seriously, I'd pay to watch Russians rape Tim Tebow. I'm not even picky about the Russian military unit you choose to do it since they're all really good at the raping thing. The Spetznaz would be nice, of course, but they're pricey. I paid some Belorussian highway patrolman to assault Eric Crouch in the 2002 draft, and that worked out just fine." <----TEN SECONDS OF DEAD STARING INTO CAMERA.

We're not saying McShay is wrong. We're just saying he likes to watch college quarterbacks fail, and possibly that he likes paying Russian military units to sexually assault them for his pleasure. In a perfect world, the only commercial we care about at the Super Bowl involves Todd McShay, Tim Tebow, and a jealous Urban Meyer. Why, sir, this commercial can't possibly exist, you say? Oh, surely you know better than that now. (After the jump.)

Remember: it's not gay if it's with Tebow, and that is a way better pro-life ad than whatever Focus On The Family is going to air during the Super Bowl, because it is ONE HUNDRED PERCENT SEXY AND FABULOUS, and life should always be that.