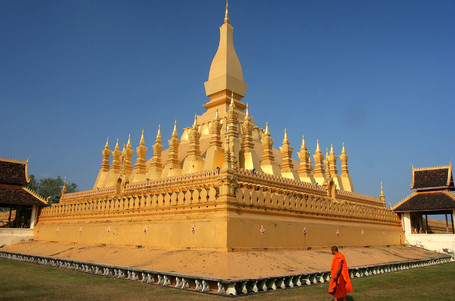 I went to Laos once. You can do a lot of things there. You can stand on one side of the Mekong and look out at the far shore and note the glowing distant signs of clean 7-11s on the Thai side, and then look back and note the puny twinkling lights of still-Communist Vientiane behind you. You can stuff yourself with larb and sticky rice until you burst, or marvel at the ghastly Chinese architecture popping up all over downtown, PRC dollars thrown down in the form of garish gables and sheets of polarized glass. You can change two hundred dollars into a pile of Lao Kip so huge you have to tote it down the street in a shopping bag. I spent two hundred dollars in Laos. I'm still not really sure how.

You can go north along the only North-South highway in the country. It is amusing to hold up Lao money and spot every sight depicted on their currency on this one drive. Hello, cement factory depicted on the back of the 1000 Kip bill; hello, water buffalo from the 5000 Kip bill. In the backpacker town of Vang Vieng, you can rent bikes and drive around the city in an altered state until you reach the edge of town in a ten minute wobbling path. There's nothing but rice paddies and limestone karsts as far as the eye can see.

An old Vietnamese saying is that "In Vietnam we grow the rice, in Cambodia they watch it grow, and in Laos they listen to it grow." I do not actually know if that is a Vietnamese saying, but since it makes them look good I assume it belongs to them. Laos is isolated from the world, and beneath the heel of a government too lazy to oppress with any fearsome consistency. If chillwave were a country, it would be Laos. The memory of the world's laziest cockfight stands out in my memory: a crowd of Lao men, drinking, smoking, and lackadaisically throwing money on the ground as two disinterested roosters poked at each other with their spurs.

There is, at any given time, about 50% of Laos to experience. The rest is not there.

The hardest thing for someone with ADD to acknowledge is their non-presence in certain situations. This doesn't really happen to normal people most of the time: they may be preoccupied, even distracted, but are they really down the wormhole like someone with ADD, thinking at any given time the following chain of events I just wrote down from an uninterrupted stream in my head?

I don't even know if those are linked, but i know where the Be Here Now part comes from: a time when I was 20, and badly botching a roofing job by whipping through roofing tiles like a fat man rips through pop-tarts, haphazardly nailing them to the roof in uneven lines, breaking other, throwing whole ruined flaps of tiles congealed together onto the ground.

One of the roofers in charge finally snapped and grabbed my arm. He had a forearm wrought from years of hammering the shit out of things for a living, a fasces of muscle and ligament welded to bones with labor and the nightly application of some kind of alcohol. It was violent, but he let up and looked at me and relaxed his grip. He either knew I was clueless and took pity, or didn't care enough to whip my ass because I wasn't worth it. I suspect the latter, not the former.

He growled. "Stop and think about what you're doing." Then he didn't talk again, and finished the roof before going home, sleeping with his five wives, and then drinking a 48-pack of beer while emitting badass rays to keep the Florida swamp wildlife out of his bayou home.

I still say this out loud to myself when i get to hammering pointlessly and throwing tiles off the roof like frisbees, and it is the best advice I've ever gotten. I also stopped doing any kind of roofing whatsoever, because throwing things off the roof is far more fun than hammering anything into a roof, and that kind of temptation is something a person with severe ADD does not need.*

*It takes an act of willpower not to throw all the porch furniture I see into pools, and to not scream in a quiet room, and to not pop every single bubble on a piece of bubblewrap the minute I see it. There is not a pen unchewed in this house, and I have never smoked a cigarette because one would become a million would become lung cancer.

When it comes to "not being there," I understand it on a deeply personal level, since it's practically a home ZIP code for me. When you're half-somewhere, you're nowhere. It also happens to be the default state of humanity by necessity. 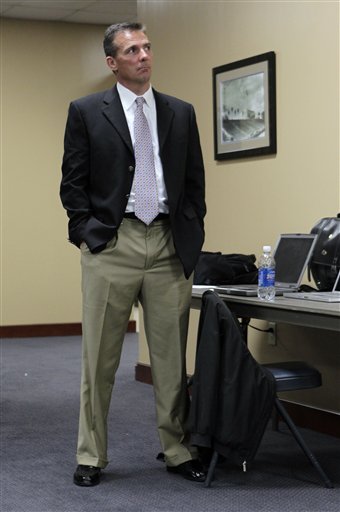 If Urban Meyer was 75% there, he didn't belong at his job, a job that just happened to be coaching the University of Florida, then he ultimately did what was right in leaving. The percentage of person who showed up to the Heavener Football Complex every day was 100% present for four years straight, and the difference for the 347 days since his return was evident in the percentages: the 71% win percentage at 7-5, the 0% shot at an SEC Title after the dreadful bedcrapping at Alabama, and the 100% legality of the forward bounce pass LSU used on a fake field goal to beat Florida at home. 75% percent of being there is still 7-5, a total that at Florida will get you 100% fired eventually.

Knowing why isn't particularly important. Physical health could be one reason; mental health could be another. Urban Meyer might be on the verge of war crimes charges for what he did in his rampage through the SEC from 2005-2009. He might be fleeing a dereliction of duty charge from a military tribune headed up by Ben Hill Griffin. (Don't think Florida boosters don't have their own legal systems. See: Huntley Johnson.)

That 75% got 25% of Urban Meyer at home. That may be more than most working parents get with their children, but to assume we're all not fractionally present at any given moment in some sense is an illusion bought willingly by those who have to cut deals with reality to make ends meet. Meyer can assume he'll be 100% at home and 0% thinking about football for a month, or two, or maybe even three months. He may even hit six months if he cultivates a real inner slacker.

That sentence defies anything you might know about him as a coach, and yet he still may do it. People do change, though it's as rare as a white buffalo when it happens and just as difficult to see. Meyer will have to settle at some point in the future for being a fractional human again, because that is what we do. There are acceptable percentages of presence, and we parse them out as best we can. If anything, this is why successful people are often abnormal: devoting 100% of your attention to anything is an unnatural agreement with the clock.

The only question you have for someone who lives a kind of half-life, the sort of marginal presence in a role, is this: why? You knew it, we knew it, and the world knew it, so why stay on in the first place for a year, a full rotation of the sun around the earth that you spent in half-shadow doing a marginal job? As pleasant as our own personal Laos was, it was still only half-there, and we demand abnormality in the job you chose to do--and for a while, you delivered it to the fullest.

We knew you were gone to normal, or something close to it, a long time ago. The moment Florida football became half-there and started staging half-baked cockfights for football games we knew, at least in some degree, that you weren't there. Walking out the door for good was a mere formality, a piecing together of fractions to make a long-split whole. That's why I'm not emotional over this, and neither were you. At that point it was a matter of math, and math doesn't cry.