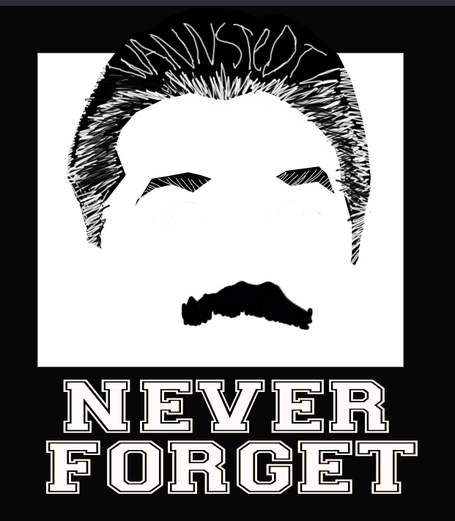 THE END OF AN EPIC ERA WHICH SHALL NEVER BE FORGOTTEN. The Wannstache is gone at Pitt, and long live the Wannstache. Never shall we again have a marvel like the 3-0 2008 Sun Bowl; never again shall we see such lusty punting on 4th and short; never again shall we see Pitt fans marveling at how someone could recruit so well, and yet remain a horrible gameday coach. Wannstedt will remain on board for the bowl game and perhaps in the athletic department in some capacity, but Pitt-watchers of both conventional and new media leanings seem to agree it was time, and that the Wannstache was a great guy but lacking as a person to make football-like substances for your football program.

As with any relationship where both parties are six years into things, if it ain't working, you're the ones to determine that and we will not question it. This leaves the man who hired Bill Callahan to find another coach for Pitt, and my shouldn't that be delightful entertainment for a winter's morn! (Jeremy Foley once hired [NAME REDACTED.] Broken clocks, etc, but the relationship was likely doomed from the start.) Video of the Wannstache's very short statement is here. It is not fun to watch.

Despite his shortcomings Wannstedt may lean on two significant achievements at Pitt. The first is screwing West Virginia like an absinthe-addled sailor on shore leave in 2007, opening up the national title shot for LSU. (LSU fans have not forgotten, and have made their own tributes already.) Second, he did give the world the worst game of football we've ever sat through, one so bad Mike Riley was stifling laughter at the end of the game. Ride on, Camaro Knight of Pennsyltucky; ride on, sweet 'stache.

DRUG HOUSE SOUNDS LIKE A FANTASTIC REALITY SHOW IN THE MAKING. Derrell Johnson-Koulianos, Iowa wide receiver, went from "mercurial" to "Troubled" with a capital 'T' with his arrest on drug charges yesterday. He is charged with, as Black Heart Gold Pants puts it, "everything." DJK is suspended from all team activities, and will likely miss the Insight Bowl barring some astonishing lawyering. (Is it the offseason yet? No, and therefore this does not qualify for the Fulmer Cup.)

SO YOU DON'T WANT TO TAKE HOLGORSEN OKAY PERHAPS YOU WOULD BE INTERESTED IN THIS STEVE ADDAZIO MODEL WE HAVE HERE. Texas may be interested in getting shifty Boise mojo on their offensive staff. We'd pay to watch a camera trained on Greg Davis the first time a hypothetical Boise-offensed Texas team comes out and shifts five times before sending eight men in motion pre-play without getting a flag. If that fails, however, a national-title winning offensive coordinator is right here waiting in Gainesville and is ready when you are.

YAY A HELMET. Bois on bowl gifts. He made them himself, dammit, and now you have made him cry, Bilal Powell. Also at SBN is our review of announcing teams for the bowls, and God really, really hates you Michigan.  This Week in Schadenfreude is also chocked full of harm this week, and is necessary viewing as always.