Howard Schnellenberger, legendary coach of the Miami Hurricanes, Louisville Cardinals, and the Florida Atlantic Owls, joins us to rank this year's bowl games using his vast personal experience with bowl season. His opinions do not necessarily reflect those of SBNation or the site, but they probably do. Enjoy.

1. The Bell Helicopter Armed Forces Bowl.  SMU versus some poor bunch of souls who will taste the wrath of Bobby Collins' anything but tame Mustangs. I can't see another team coming close to their program for ten years, barring an unforeseen disaster.

2. The R + L Carriers New Orleans Bowl. A bowl for gentlemen and their fine suits. 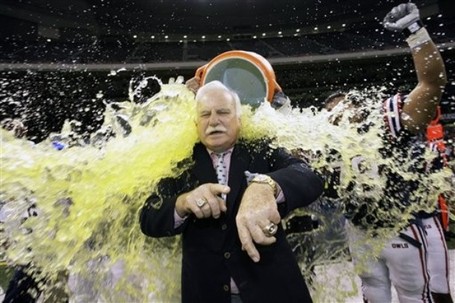 Also I pick up my yearly installment of Manila shipping rope in that fine city every year anyway. It's the only floss a man should use.

3. Sheraton Hawaii Bowl. The natives of this island used to throw boys into the volcano to appease the fire gods. I bet the ones who made the swim out made fine football players.

4. Discover Orange Bowl. My adopted hometown will always welcome those who seek a warm escape from Old Man Frost's icy fingers. My close personal friend Harry Blackstone will be the halftime entertainment as usual. Need to call him, as I haven't heard from him in a while.

5. uDrove Humanitarian Bowl. The city's large Basque population and culture do endear themselves to a country boy like myself, particularly their fondness for sheep. Mother Nature's buffet, companion, space-heater, and free-weight all built into a single package. My Louisville teams utilized only sheep-based strength training.

6. Franklin American Music City Bowl. The music of Nashville has always moved me beyond words.

7. Little Caesar's Bowl. Some people don't like all the empty buildings in Detroit, but if you don't appreciate free lodging that requires a bit of elbow grease, a sturdy pup tent, and a good solid Turfman's Rat-hammer you're not my kind of people.

9. DVDA Compass Bowl. Received a key to the city of Birmingham once. Its only use: opening a musty bus locker at the Greyhound station filled with souvenir Alabama-themed Coca-Colas and racist t-shirts. Both are treasures to me.

10. The Kraft Fight Hunger Bowl. San Francisco has its detractors. I defend any city that insists on the irony of being as curvy as Mamie Van Doren in a city full of men who want to wear her girdles. I'm also believe in fighting hunger, which is why I'm eating an entire can of Underwood Deviled ham using a playing card as a spoon as we speak.

11. Bridgeport Education Holiday Bowl. In San Diego, I always order the sea lion. Look for it on the menu under "beach sausage."

12. Hyundai Sun Bowl. The Koreans have agreed to repay us at last by helping us invade Mexico, and it will start at the Sun Bowl. I'll be there on a burro named "Libertad," which I understand means "Steve" in Spanish. Notre Dame will be first into the line of fire. This is as it should be.

13. The Texas Bowl. When I want New Orleans but without the culture, food, or places of interest, you bet Ol' Schnelly's heads to Houston. (Never been there.)

15. The MAACO Las Vegas Bowl. Would be higher on the list if Las Vegas' so-called "hospitality specialists" at the Mirage wouldn't bother a man during his bath. If you didn't want me in it, then don't fill it with water and top it with the best skin-bracing exfoliant there is: kerosene flame.

Those people watching were applauding for more than the fire, gentlemen, but we and the Nevada legal system will agree to disagree.

16. San Diego County Poinsettia Bowl. Never believed what I heard about poinsettias. Been feeding 'em to my cats for years. "Cats" are my nickname for my nephews and nieces.

17. The New Mexico Bowl. Basically a radioactive Sun Bowl with the cancer dial turned up and the murder dial turned down. Not scared of either, but we're not exactly friends.

18. Beef O'Brady's St. Petersburg Bowl. Still bitter at this scurrilous restaurant for stealing the concept behind my "Tripe O'Houlihan's" chain of spare meat houses.This is mitigated by my respect for St. Petersburg's tradition of senior citizens' pitfighting. You haven't lived until you catch a fighter's dentures thrown from the ring after a victory.

19. AT&T Cotton Bowl. Ma Bell's going to be pretty upset when this upstart AT&T is made known to them.

20. Gator Bowl. Jacksonville is for two things: hobo rendezvous and paper manufacture. Having a bowl game there is just giving too much to a city that already clearly has everything. Too fond of bridges, and full of people afraid to cross rivers the proper way: by walking right through them.

21. Go Daddy.Com Bowl. For a city named "Mobile" a good number of its residents seem to have difficulty moving without those damned Rascals. The Germans have had a battleship parked there for years and no one's noticed yet.

22. The Outback Bowl. Miami's jealous and homely sister. We might buy you an orange phosphate one day, but our milkshakes and malteds will go to that lady by the sea as long as there's pop in these suspenders, dear.

23. The Insight Bowl. That's a lofty name for a bowl game featuring two teams from the stumpbreaking states, sir.

24. The Military Bowl Presented By Northrop Grumman. Haven't trusted the bastards from Grumman since a F6F Hellcat crashed on me in the middle of the Battle of Heartbreak Ridge. Still have the bump on my scalp to prove it, too.

25. Valero Alamo Bowl. Are you really loyal to the United States, San Antonio? Why not "St. Tony," friend? Or should I say..."amigo?" 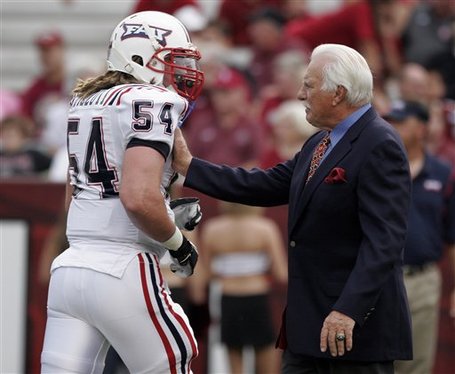 26. New Era Pinstripe Bowl. Croquet shouldn't be played during tank maneuvers, salad doesn't go on the same plate with the Salisbury Steak at Picadilly, Jews watch the NBA but should never play in it, and college football should not be played in New York.

27. Meineke Car Care Bowl. If the City is as unclean as the woman I knew of the same name, they'll need snowplows to clear the field of garbage before and during the game.

28. The Chick-Fil-A Bowl. Never respect an SEC town that let a man from Ohio put them in the loss column.

29. Tostitos BCS Championship Game. The number one cash crop in Arizona is cotton, and yet you insist the idea of a catfish farm in my lap pool is insanity. I don't understand your logic sometimes, Blackout Hawk's Ridge Homeowners Association.

30. Autozone Liberty Bowl. The city that killed Martin Luther King, Jr. but let that bastard Wink Martindale live to leer at my lady while she does her water-robics on Tuesdays at the Boca YMCA will receive no votes of mine.

31. Allstate Sugar Bowl. I knew a man who visited this city twice in a month. That man died. The name of that man? Howard Schnellenberger. I recovered, but you might not.

32. Capital One Bowl. Orlando should not be visited twice.

33. Ticket City Bowl. I'm not sure where Ticket City is. I suspect it's like Moving Violation Acres, which is what I call that blighted stretch of road you call Highland Beach, Florida. A man of purpose only moves in straight lines, Highland Beach Police, and no amount of white lines and asphalt will change that. They'll make more lawn gnomes and sod, gentlemen. I only have one life and I intend to live it.

35. Rose Bowl Game presented by Vizio. As long as they keep insisting that the floats are inedible, I'll never show my face there again. 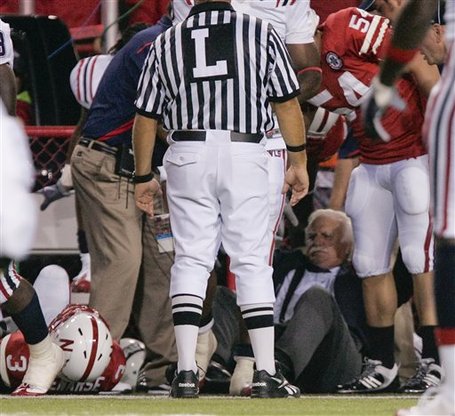