All season long we've been partnering with Consumers Union to test every aspect of college football in exhaustive detail and give you the best information possible on where to spend your money. Now that those football dollars are being directed toward bowl trips, though, both EDSBS and CU teamed up with the Zagat Survey to solicit the opinions of real-life travelers and get the skinny on where your vacation dollars will be best spent over the next month. After poring over thousands of responses, we found some good deals, some diamonds in the rough . . . and some destinations our survey respondents wouldn't return to "even with a gun pointed at my head, and a second gun pointed at my genitals." Our rankings are below. 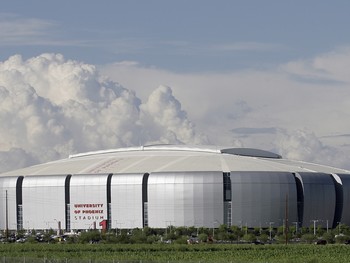 GLENDALE, ARIZONA (BCS NATIONAL CHAMPIONSHIP GAME) | ■ ■ ■ ■ ■
Highs: Two unbelievable offenses, plenty of sun, proximity to Vegas.
Lows: Distinct lack of grass, culture, and defense.
Once a destination strictly for bored snowbirds and Canadians who haven't seen enough of America to know better, Arizona has rocketed to the top of our vacation list on the strength of next month's national-title matchup, sure to be one of the most thrilling games in years. Football lovers spoke excitedly of "offenses that can fly across the field literally in seconds," guided by the "masterful direction" of Oregon's Chip Kelly and Auburn's Gus Malzahn; sun worshippers will love the "mild winter" that all but ensures "your skin will never feel better." If you're not into football or the spa scene, the marks weren't as high -- visitors from both coasts bemoaned a "half-assed" arts scene that "pretty much boils down to tacky turquoise jewelry," not to mention the fact that "you can't even catch a decent indie movie in this town" and a dining scene that "runs the gamut from Applebee's to T.G.I. Friday's and no further." Still, you're not going on this trip to get enlightened, you're going to watch two extraordinarily talented football teams carpet-bomb each other for four hours -- and for the time being, at least, there's no better place to do that than Glendale. 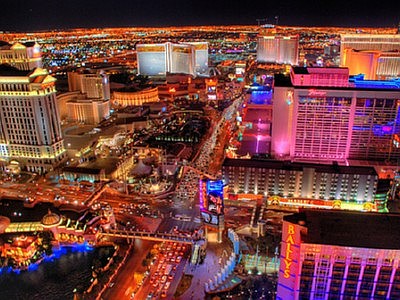 LAS VEGAS, NEVADA (MAACO BOWL LAS VEGAS) | ■ ■ ■ ■ □
Highs: Trendy mid-major cred, terrific hotel rates, and BOOBS BOOBS BOOBS as far as the eye can see.
Lows: Depressing moments as both teams sigh and look longingly toward Pasadena.
Question: When is it a bad time to go to Vegas? Never. When is it a particularly good time to go to Vegas? Right now -- or a couple weeks from now, more accurately, when two teams that started the season as BCS-buster hopefuls are slated to duke it out in Sin City. Boise's "swarming defense" and "laser-guided passing attack" will be the order of the day, even if there's a palpable sense that both teams will be spending most of their evening pondering just how close they might've been to a BCS bid. If the "emo navel-gazing" of these two "suffocatingly trendy" teams starts to wear on you, of course, you can always ditch the game and enjoy the "incredibly diverse dining" and "world-class gambling" that make Vegas a hopping destination 365 days a year. And, of course, we can't leave out the "staggeringly decadent" gentlemen's clubs, which offer breathtaking views of "stunning breasts," "asses carved out of marble," and "vaginas so painstakingly waxed, plucked and cared for that they should be in glass cases at the Louvre." In other words, a top-notch pigskin road trip that's fun for the whole family! 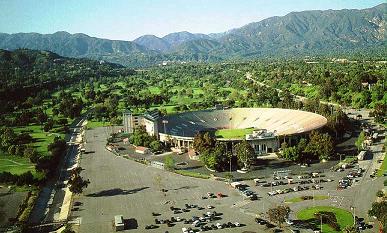 PASADENA, CALIFORNIA (ROSE BOWL) | ■ ■ ■ ■ □
Highs: Breathtaking setting, chance to see either another thrilling mid-major upset or another ritualistic disemboweling by Bret Bielema.
Lows: Expensive ticket, stadium is one stiff breeze away from auto-imploding.
"The Granddaddy of Them All" didn't get its name for nothing. More than a century after its founding, the Rose Bowl still offers a fantastic matchup, a big-ass parade, and one of the lovelier backdrops in all of college football. Tune out the "funereal creaking" of the stadium itself, whose "Dorian Gray-like deterioration" makes Birmingham's Legion Field feel "as modern and solid as the Burj al-Arab," and you've got a football tradition that always seems to make history every year. That could very well be the case in 2010, as you're likely to either see a "scrappy, defensive-minded mid-major" make fools of "a bunch of fat-ass white boys from cheese country" or recoil in horror as you witness UW coach Bret Bielema "tear an unsuspecting opponent limb from limb with his bare hands" and then "devour its still-steaming entrails." Not the kind of outcome that really fits with the setting either way, now that we think about it, but you can save the gentility for brunch at Kate Mantilini the next morning, we guess. 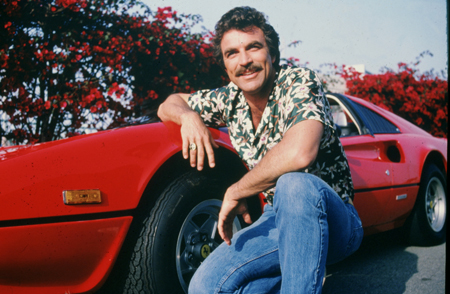 HONOLULU, HAWAII (HAWAII BOWL) | ■ ■ ■ ½ □
Highs: Two launch-it-to-the-moon offenses squaring off in an island paradise.
Lows: Exorbitant airfare, game will last until well into Christmas morning.
If even the Oregon-Auburn national title matchup doesn't feed your "delirious methhead craving" for high-powered offense, your solution may be only half an ocean away. In the "stunning palm-lined paradise" of Oahu, two teams that "treat defense like it was invented by Stalin and causes AIDS" will be lighting up the Aloha Stadium scoreboard this Christmas Eve. As long as you don't mind "wide-open passing" that will result in "more clock stoppages than the last 30 seconds of an NCAA tournament game," you will at least be "marvelously entertained" -- as long as you can afford the kind of airfare that required you to "do unspeakable things to and with my rich boss' wife" to pay for. Reviewers were turned off by the "swirling tornados of trash" that turn a stadium in an otherwise lovely setting into "some Terry Gilliam nightmare vision of a dystopian future," but we think you'll find ways to get past it. Now just rent yourself a Ferrari and don a Detroit Tigers hat and a pair of "disturbingly brief" shorts, and you'll be ready to live out your "Magnum, P.I." fantasies and watch some amazing football even as St. Nick is ignoring your house with extreme prejudice. 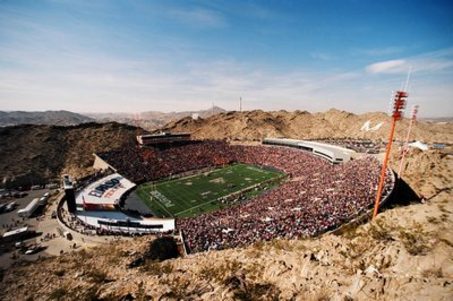 EL PASO, TEXAS (SUN BOWL) | ■ ■ ■ □ □
Highs: A re-enactment of one of the nation's great contrived rivalries, fantastic Tex-Mex.
Lows: If you're a white female and your dad isn't Liam Neeson in "Taken," beware.
In the mood for some danger? Think that rules, and occasionally kneecaps, were made to be broken? Then take your suitcase, your boarding pass, and your life in your own hands and venture to a "surreal, nerve-jangling threshold" where "wild-eyed Mexican lawlessness" lurks just over the river. If you're not too busy upping your life-insurance policy or fashioning a ransom note from letters cut out of the morning's edition of El Diario, you'll be treated to what could be a good game, a "Jheri-curl-juice-saturated trip down memory lane" to when Notre Dame and Da U ruled the roost and "Catholics vs. Convicts" was the nickname for their budding rivalry. With death at the hands of "drug gangs, giant radioactive bats, or Anton Chigurh" a constant worry, this destination is not for the faint of heart, but as long as you're prepared to "take the necessary precautions" -- or "learn the ways of the white slave trade" -- El Paso is the kind of place where most people can get by just fine. "As long as they come armed with a Spanish phrasebook," advised one visitor, "and also maybe a high-caliber pistol the size of your fucking arm." 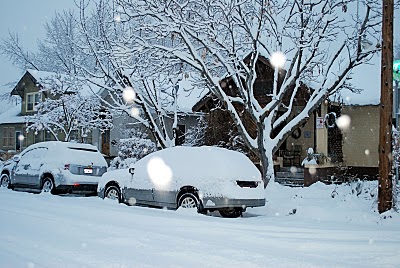 BOISE, IDAHO (HUMANITARIAN BOWL) | ■ ½ □ □ □
Highs: Terrific skiing, a chance to see the neato blue field up close and in person.
Lows: Freeze your balls off as you watch two teams you've spent countless Wednesday nights ignoring.
Our readers returned from Idaho's capital decidedly polarized. Some praised the "breathtaking slopes" and "pillowy white powder" of central Idaho's ski resorts, which have been hailed as some of the best in the nation; others nitpicked Boise State's "glorified high-school stadium" and groused that if they wanted to "lose the tip of their cock to frostbite while watching a MAC team in a meaningless game," they could've just stayed in northern Illinois. There's no denying that, in terms of football quality, the H-Bowl currently sits in danger of "losing whatever shred of prestige it once had"; more than a few of our survey respondents admitted that they knew nothing of these two teams besides "what we could pick out of the blur as we flipped through channels on the way to 'Law & Order: Special Victims Unit.'" The thing is, this could actually be a decent game, but with Northern Illinois head coach Jerry Kill already headed to marginally greener pastures in Minnesota, we wouldn't bet on it. If we would, of course, we'd be going to the Las Vegas Bowl. 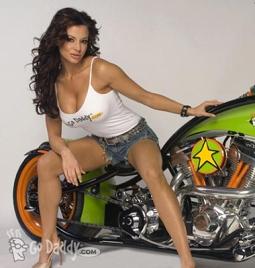 MOBILE, ALABAMA (GODADDY.COM BOWL) | ■ □ □ □ □
Highs: Distinctive Southern hospitality, plenty of good seats still available.
Lows: Having to tell people you went to the GoDaddy.com Bowl.
Part of the appeal of travel stems from the opportunity to "see amazing cultures," get exposure to "a higher class of individual," or "break boundaries" in getting as far away from one's home base as possible. The newly renamed GoDaddy.com Bowl, tellingly, offers none of these. One reviewer called this "the Panama City, Mediterranean Avenue and 'Two and a Half Men' of bowl destinations all rolled into one," with "two low-rent teams and an even lower-rent sponsor"; only the "delicious and authentic" Southern cooking available in Mobile's "quaint, characterful" downtown area, coupled with "the infinitesimal glimmer of hope that Danica Patrick or some other wannabe starlet will flash her tits during the halftime show," earned this bowl trip any points at all. The tragedy is that there are plenty of legitimate reasons for wanting to visit Mobile, but our survey respondents all spoke with one voice on that one: "Wait until Mardi Gras." 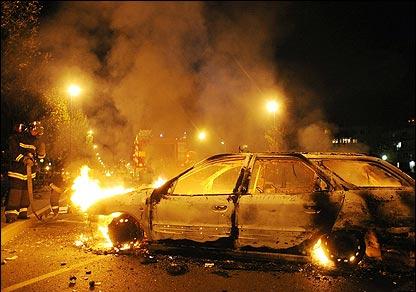 DETROIT, MICHIGAN (LITTLE CAESAR'S PIZZA BOWL) | x
"I've been to Hanoi, Bishkek and Baghdad," one traveler told us, "and I still think any one of those places would have been a more appropriate place for my team to play a bowl game than Detroit." As the economy grinds back into motion and the domestic auto industry slowly awakens from its medically induced coma, we've heard reports that a certain "urban-pioneering street cred" is starting to take hold, perhaps even turning certain parts of the Motor City into "grittily trendy" destinations for "postmodern thrill-seekers," but if this year's postseason matchup is any indication, it's got a long way to go. Toledo vs. Florida International is "the kind of matchup that wouldn't even merit pay-per-view coverage in September," yet now we're supposed to watch it "in the middle of a bullet-riddled urban hellscape" just because some pizza delivery company threw a couple million bucks at it? Nearly every one of our survey respondents told us that their excursions to the former Motor City Bowl were a "monumental mistake," and one summed it up thusly: "If you get any closer to this game than Grosse Pointe, you've gone too far." A pretty clear statement, and one that most definitely earns this bowl trip our Not Acceptable rating.