AWWWWWW.  If you peruse the galleries of bowl photos, there's inevitably a few of the hospital visits players make as part of the bowl week festivities. The linemen make the best pictures: HERE LIL CUB BIG BEAR BRING YOU MOOSE YOU EAT MAKE STRONG. 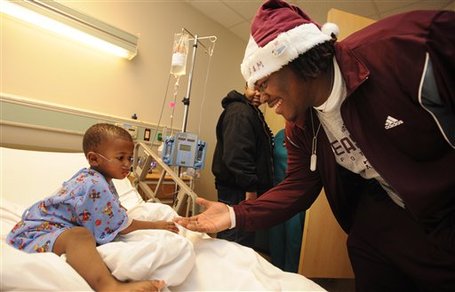 LET US NOW PRAISE THE NEUTRAL MILK HOTEL OF FOOTBALL TEAMS, BOISE STATE. The ultimate football hipster team is now decided: it is Boise State 2010, the team whose magnificence fizzled in a single night in Reno, meaning they never had to "sell out" by playing in "a major brand's bowl" and thus ruin their "alt cred." Remember, the best football teams are the ones that never really happened, and their final misfiring classic last night against Utah will be remembered as the football hipster's version of the Beach Boys' Smile*: messy, full of mistakes, and adored by those who hail its imperfect perfection. (Also, Utah's offense was horrible. That always helps.)

*Seriously, Holland is so much better, and Smile is total shit. <---OUTHIPSTER'D

UNFAIRLY QUOTED: KEN NIUMATALOLO. From an article on the still-submerged field at Qualcomm Stadium, the site of tonight's Poinsettia Bowl:

"We’re excited to strap it on anytime.  For our seniors, this is going to be the last time for them to do this.  Plus we’ve been practicing on a ballroom carpet, so I think the carryover is going to be minimal."

(Via Paul.) The burns are hell, but the traction is incomparable, especially if you've ever tried to strap it on in a session on high thread count sheets. The field, as of last night, looked like this. RUN THE DIVE HAHAHAHAHA. #addazio'd

URBAN MEYER, CHILL BRO. Last night's television audition for Meyer went pretty well, all things considered. Meyer looked comfortable--almost too comfortable, in fact, since at times he appeared seconds away nodding off on the set. He was at his best when breaking down plays, something he did with a clarity and speed no other ESPN announcer this side of Ron Jaworski dare attempt. This would be an ideal use of his talents: breaking down real football plays, showing how they work, and working a telestrator till it bleeds. Between him and Trevor Matich on set, the other ESPN college X's and O's junkie, it was a geek's feast on set. This probably means bad things for most viewers, but most viewers can go piss up a rope made of burning cat hair.

He still can't smile like a normal human being, but that's overrated. Craig James has a beaming grin, after all, and that's worked out so well for them.

TAKE NO CHANCES AKA BRIAN KELLY READS EDSBS. Brian Kelly is taking Notre Dame players' passports in order to prevent them from cross-border jaunts to Juarez. Miami has announced no similar countermeasures, presumably because Juarez and certain sections of Miami are really a push as far as public safety goes.

WASTED AWAY AGAIN IN HOLGORITAVILLE. There's little content here, but the name is beyond promising. We'll work up a recipe for the Holgorita soon enough, but we are taking submissions in the comment section. Tequila must be involved.

LES MILES REALLY LOVES CHRISTMAS.  The press conference is a bit long, but listening to Les Miles talk about Christmas is as fantastic as you think it would be. It's not earth-shattering, but you must giggle at the man saying "Socks, underwear and ties? Fine with me."

YOU'VE MADE A MISTAKE YOU SAY: Not our mistake anymore, but condolences nonetheless.

FOR CHRISTMAS WE WILL SEE/ A THREE STAR FULLBACK TALKING EXCITEDLY! A three-star fullback is excited about our hypothetical offense! I'm twelve years old and what's a fullback?