Share All sharing options for: DRUG TESTING IN COLLEGE FOOTBALL: LET'S GET BLOWN 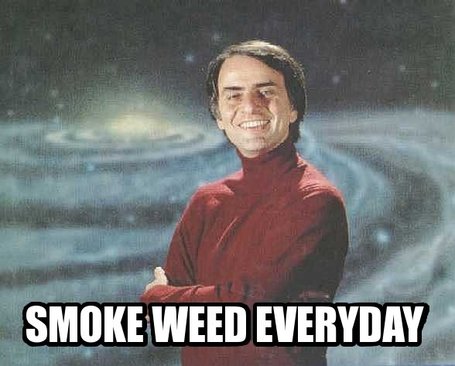 Carl Sagan's advice--lifted from the physicist's epic hook on Snoop Dogg's "Smoke Weed Everyday"--may unlock the keys to the universe, but it will get you kicked off a football team. This applies to some teams faster than others, though exactly how soon at which schools has always been a bit of a mystery.

The Department of Media-ites with Connections and Gusto presents Brett McMurphy's research into the matter, which unveils the disciplinary practices of 60 universities with FBS football programs re: drugs. Surprise! Florida allows for four positive tests before a fifth earns your dismissal, but please remember that even that very liberal number may not be close to the real number. In fact, we're certain Percy Harvin's urine smoked in the cup and gave lab technicians a contact high on exposure.

Just remember that for all schools the initial number is a fiction of sorts, as all schools make up their own protocols on drug testing. (See Iowa's weird ass press conference last week about how theirs failed badly.) Talented players get away with more at more places, and your third-string defensive lineman will get nailed for a positive codeine test off some cough syrup before the problem is explained away with a nasty cold. If the lineman has the same cold for six months, well, that seems perfectly plausible to us!

The cleverer policies like Purdue's and UCLA's have timing clauses built in to expand the possible maximum number of chances to five, while Miami's is Randy Shannon-icy: one game, two games, and then a third test equals dismissal. Ole Miss has no penalties for two positive tests. You might think they would be the most drug-friendly of all schools in this department, but Notre Dame, Northwestern, USC, Stanford, Syracuse, Vanderbilt, and Wake Forest refused to give drug policy details of any sort to Fanhouse. Why? Because the elites are allowed to have their vices, darling. When you do it it's a felony, but when we do it it's luxury. (The exceptions in that group: Syracuse, who are close enough to lake-effect snow to merit heavy drug use for survival's sake, and Wake Forest, which must be more like "Wake 'n Bake Forest," amirite?

P.S. McMurphy points out to us that prior to 2010-11, Florida's policy included a clause that allowed a reversion to the total of previous positives if someone stayed clean for 12 months, thus expanding the total possible positive tests to five before the sixth resulted in dismissal. We still insist Percy Harvin tested positive seventy-three thousand times for weed and got away with it.