Take this in the best possible way: the Big Ten's best branding edge is its hopeless and endless resistance to branding. For any and all efforts to nudge the conference in one direction or another, to update it, to make it hip/edgy/:"relevant"/vomits, for the attempts to expand markets, etc, it all gets trampled by a 1955 marching band thumping away beneath the leaden skies of the midwest in late fall. If you saw a pennant at an SEC game, as in an actual person waving an actual pennant at a game, you might assume you were having a stroke of some kind, but in the Big Ten you'd just assume they were being as charmingly retro as everything else that happens in the conference.

So you're stodgy, and should embrace that. Stodgy is a look. Stodgy is Jim Tressel killin' it in a sweatervest and grey slacks. Stodgy is a nice tweed jacket. Stodgy can work. Stodgy is not 90% despised and a thin veil for a Ladyhawke fantasy. In order for stodgy to become the inhumanly corporate "Leaders and Legends divisions," the backup suggestion had to be the following. 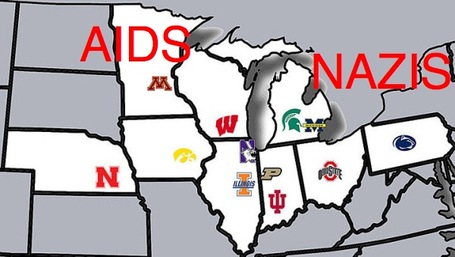 Laugh if you will, but we assume Nazis and AIDS got a good 10% approval rating because in any given focus group there's a slice of exactly 10% of people who will like anything you put in front of them. They are also the same people who bought The Secret, watch Two and a Half Men, and who are responsible for every other "Thing Why What Popular Sad--" item you cannot understand in our culture. These are your neighbors, and they, too, are allowed to have guns, sharp things, and a vote.

(JoePa objected to "Nazis," but was okay on a compromise name of "Nazi-killers," because he'd still really like to go out and kill some Nazis.)

P.S. The SEC doesn't worry about branding its divisions for the same reason crack dealers don't write "CRACK" on baggies of their product.