Why you vacillate between the two, Mike/Michaels, we'll never know. Mike is short, informal, and has it's definite advantages. Mike is a tiger, a reliable dude's name, and precedes the noble names of Hammer, Douglas, and Ditka. Michael precedes Jackson, Bolton, Buffer, and in the singular is an avenging archangel. The message is clear: if you have little ambition and just want to chill, you're Mike, and if you want the kind of greatness Michael Bolton and his lustrous hair enjoyed from 1987-1993, you go by "Michael."*

*His Theory of Friends vs. Lovers Incompatibility Theorem is still the premiere work in the field, particularly his research into the making of amends during endless conflict.

Thus the confusion between Mike and Michael Haywood, the now-former Miami of Ohio coach hired at Pitt. He's Mike, but as he progresses up the coaching ladder he's probably got to switch to Michael for ambition's stake. You know nothing about him besides his slight resemblance to Paul Mooney and his Redhawks team's impressive upset of NIU in the MAC Championship game. While this may seem like a pittance of a resume, but remember that it's one whole, unshared title more than your previous coach could boast. Additionally, he's a Sabanite, so you may expect PROCESS to follow his hiring.

For Mike Haywood, today may feel like Groundhog Day. Newly hired at Pitt, he will enter the press conference to a hail of skepticism from message board loons and near-hostile questioning from local media wondering why the Panthers didn't do better.

It happened two years ago -- albeit on a much smaller scale. Most Miami alums were, at best, underwhelmed when he was hired to clean up after Shane Montgomery, and a small but vocal core of football alums threatened to withhold support from the program because the university did not hire a "Miami Man" such as Kevin Wilson, Curt Mallory, or Aaron Kromer. To this day, rumors persist that Miami's president, David Hodge, overrode his athletic director and insisted on Haywood. 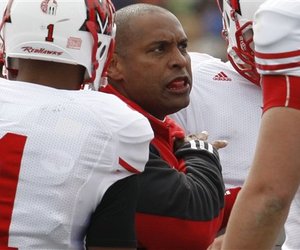 Mike Haywood, seen here poised to strike a fly on a lineman's shoulder pads with his sticky prehensile tongue.

How did we get from that day to this one, particularly after Haywood posted a 1-11 record in his first year at the Cradle of Coaches? Well, let's start right away with what Mike Haywood is not. As every Notre Dame and Pitt fan in recent history have noted, he's not a brilliant play caller. To take just one example, Miami's offense this year featured a bewildering buffet of ill-timed trick plays -- including one that cost us our senior starting kicker for a couple of weeks. And, from all reports, he's not a great alumni speaking circuit guy and has never established much rapport with former players.  (Here, we recall that Haywood interned at the Nick Saban School of Human Relations.)

But all the instant-reaction hounds and talk radio goons who immediately dismiss Haywood because he didn't see eye to eye with Charlie Weiss on play-calling are missing the real story here. Mike Haywood is a natural-born leader in your locker room. If you've seen the videos of his pre-game speeches before the Temple and NIU games, you know he's a motivator. And, if you take a look at Miami's current staff, you'll see that, although he is a relatively young guy, he had the network of connections and self-confidence to surround himself with a veteran staff that has been light-years better than the kiddie corps we put around Shane Montgomery. (In fairness to Montgomery, Haywood was given a much bigger budget with which to hire.)

When he arrived in Oxford, the Miami football program needed a high colonic and return to fundamental values. And Haywood provided both. He ran off a huge number of upperclassmen whom he deemed to have poor work habits; he moved player study halls from a large training facility to the coaches' offices; and he worked like heck to recruit all over the country, relying in particular on his contacts from his years in Texas.

In Year One, the results on the field stunk, but there were glimmers of something better. This fall, I watched Miami play at the Swamp and saw the first signs of hope. Forget all of Florida's mistakes for a minute; in that game, Miami was aggressive, more physical, and better conditioned in the fourth quarter before finally succumbing to superior talent. And then the team kept improving.  One of our players, tight end Jordan Stevens, summed it up for the Pittsburgh Tribune-Review last night:  "He instilled in us how to be good men, not just good football players.  He built all of us up to be great people, not just on the field but when we were in the classroom and when we were walking on campus. He improved all aspects of our life, and that's what a football coach really needs to do."

So, what should Pitt fans expect?

* Expect a "CEO-style" coach who will push for a good budget from which to hire experienced assistants and then delegate heavily to them.
* Expect a huge emphasis on strength and conditioning (and for your current S&C guy to be nudged aside, even if he's pretty good).
* Expect a lot of talk about values -- words like "family" and "brotherhood" even when they sound corny. (N.B.: Expect most of the players to buy in, but don't be surprised if the coach bolts for an SEC job if he makes a BCS bowl game in Year Two. [/bitter Miami alum mode].)
*Expect a "shake down cruise" in Year One, where no returning starter's job is safe, particularly if they don't buy in on the work ethic and cultural issues. And, then -- I think -- expect big things in Year Two.

Mike Haywood isn't going to blow you away with scheme or charisma, but he's got all the makings of a tough, old-school football coach. Has he "proven himself"? Perhaps not, but much like mid-majors, Pitt appears to be hiring on potential here, and I think Haywood has plenty of that.

DevilGrad is one of the inhabitants of the Cradle of Coaches' finest website, Miami Hawk Talk. Be nice to them, because they're probably hiring your team's next coach.