WILL MUSCHAMP: WE NOW ORDER THE BLOWFISH

Share All sharing options for: WILL MUSCHAMP: WE NOW ORDER THE BLOWFISH 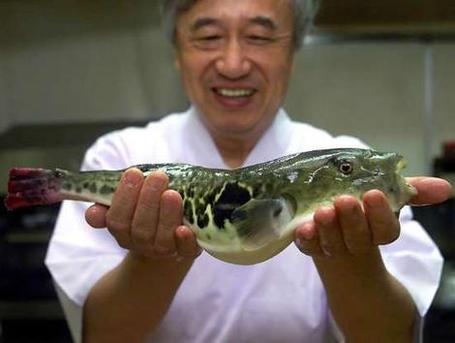 This isn't [NAME REDACTED 2.0] Let's strangle that misbegotten infant of a comparison before it grows, learns to walk, and starts breaking furniture all over the place. When Jeremy Foley made a decision only a man in the darkest depths of a ketamine binge would made and brought the once-demoted former defensive coordinator of the early 90s Gators into the office of head coach, [REDACTED] already had a reputation for enthusiasm over production. His Saints defenses collapsed with leads; his Florida defense was so fundamentally unsound and sloppy he ended up being demoted to special teams coach, where he excelled due to his natural enthusiasm and penchant for headbutting players (and anything else within forehead's reach.) His coaching pedigree read: Haslett, Spurrier, Majors, and Cooper. His trajectory, prior to Foley's hiring stuntwork, was that of a lifelong assistant. His corollary in the professional world was upwardly mobile middle management, probably "crushing it" in management seminars and "listening to motivational tapes" to "increase synergy and unleash the dynamic sales force of this company."

Muschamp's pedigree is far kinder to the eye: defensive coordinator for LSU's national championship defense under Nick Saban, now-former holder of the Dauphin position at Texas and favorite of Mack Brown*, and right-hand man to Tommy Tuberville from 2006-07. He is no journeyman; his natural corollary is that of the the blueblooded heir apparent, illustriously pedigreed and now abandoning the safety of the guaranteed big firm for a equally glitzy but cutthroat competitor where safety is no guarantee.

His defenses have been superb wherever he has gone, often without offensive support, and his recruiting chops are sound and relentless. It is the consensus of his peers that a head coaching job was when, not if. Texas had already handed him the keys, but kept him on the learner's permit until their own Don was content with retirement. The Longhorns' delay in getting him a real license is why we're having this discussion today, and why Muschamp's mud-spattered truck with the lift-kit will be parked beneath the stained gray concrete eaves of Ben Hill Griffin Stadium this year.

This is always about risk. If it's not, then you hire Chan Gailey. (A Florida alum; if this goes really badly, it's still better than hiring Chan Gailey. Just say that to yourself: it's still going to be better than hiring Chan Gailey come flood or fire.) If you're dumb about it, you play the part of the overly provocative-but-brainless innovator and hire pointlessly odd coaches, and yes we're writing about Notre Dame here.

In Foley's case, we think the thought process was: I should hire 1999 Bob Stoops. Not current Bob Stoops, he of the comfortable Oklahoma lordship, the three million dollar house, the endless parade of plug-and-play assistants who feed a machine comfortably gobbling up Big 12 titles every other year and making the BCS almost effortlessly. Hiring this Stoops would have been a chronological error. 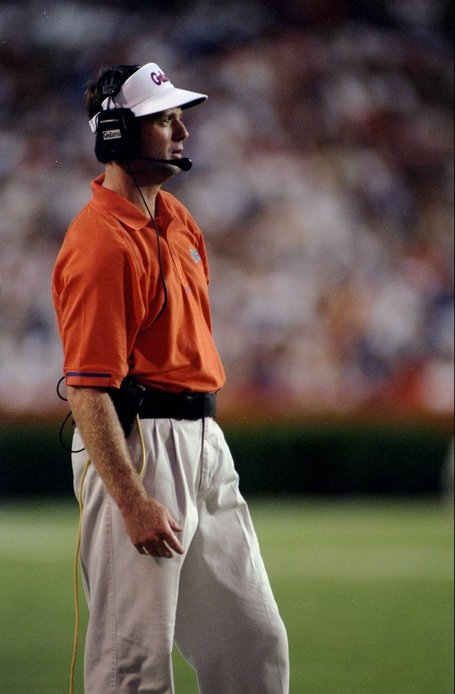 The Stoops Foley wanted was the man we watched convince a room full of students--many of whom were simply football fanboys incapable of running a gasser without cramping and puking--that yes, they could play an effective Cover 2 press, and that it truly was the most effective defense ever devised by man, beast, or Buddy Ryan. That was 1996, and a blue-pantsed Stoops in a white Florida polo was one of the more riveting coaching presences we've ever seen with the naked eye. He was on fucking fire for football death, and his imminent departure to parts unknown for glory and titles was assumed.

That guy's not around anymore. The closest thing is Muschamp, the coach who as an assistant at Valdosta State once taped a broken headset to his skull with white athletic tape in the name of necessity, the guy who in his tenure there once called up his head coach Chris Hatcher after a no-contact practice and yelled into the phone for five minutes straight about how the referee was shorting his defense sacks in a completely fake non-game situation that would ultimately count for nothing. Muschamp was rotting on the vine at Texas, and is a bomb waiting to go off somewhere. Florida lit the fuse on that bomb and is running to the horizon hoping for the best.*

*How it explodes is the issue.

The other choices were nowhere nearly as pat as anyone wanted to make them. Mullen was allegedly not well-liked by administration types. Petersen remains so ensconced at Boise that he may never leave. Harbaugh has no connections to Florida whatsoever, and would have left for Michigan or perhaps the NFL without hesitation. Whittingham is heading a program entering the Pac-10, and needs no cross-country transfer in order to compete for national titles. Stoops isn't going anywhere, and if you say Jon Gruden you are not very smart and need to go floss with power lines.

The truth is that there are no guarantees, but the next truth is that Muschamp is even less of a guarantee than any of these because he has never been a head coach at any level before, and that thought alone should make Florida fans shit anvils this morning. Ours was magnificent: a weighty rhino's head of finely hewn iron, it's in the backyard lurking like the head of a great black Bullet Bill caught in mid-air. You'll feel clean as well-maintained natural gas pipeline once you pass it.

The same was true of [NAME REDACTED,] and of Charlie Weis at Notre Dame. It was also true of Stoops when he took over at Oklahoma. To say you have any idea how this will turn out is insane, and enough wagering's been done here. Let's just leave it at what is known: he's potentially brilliant, young enough to happily give the pound of flesh the job takes out of you, and is not demonstrably dumb like some people you've hired in the past. What is also known: this hire, unlike Foley's last, is a massive roll of the dice on an unknown quantity, a naked skydive into a raging forest fire armed with a car-sized fire extinguisher compared to the easy nod to Urban Meyer in 2005. This simulation features live fire, bears, and the worst beast of all, real live existential dread of the unknown. That won't pass for quite some time, we're afraid.

Muschamp, like all coaching decisions, is a wager, but damn, Jeremy Foley. That's not the table minimum. That's the fucking mortgage right there.  We all just ordered the fugu together, and if the chef gets it right you'll taste the faintest hint of the fish's fatal poison on your tongue in a sublime culinary experience unlike any other. If he gets it wrong, we die.

HT to @BurritoBrosShit for the fugu analogy.