THE APPROACH IS KEY: I drove into Boise from Salt Lake, but that wasn't a given when the plane descended from the clouds and into Mormon Hoth. Salt Lake isn't the most polychromatic city, but snow didn't help, a full dusting with accompanying winterfog and a constant sleet. When I picked up the rental car, I was relieved to find they had given me a bright yellow Toyota Land Cruiser. Ninety dollars in gas bills would be painful, but bright yellow is a very visible color even in the fiercest of blizzards. At the very least it would make a nice beacon for the highway patrol to find my body after I drove off the side of a mountain. 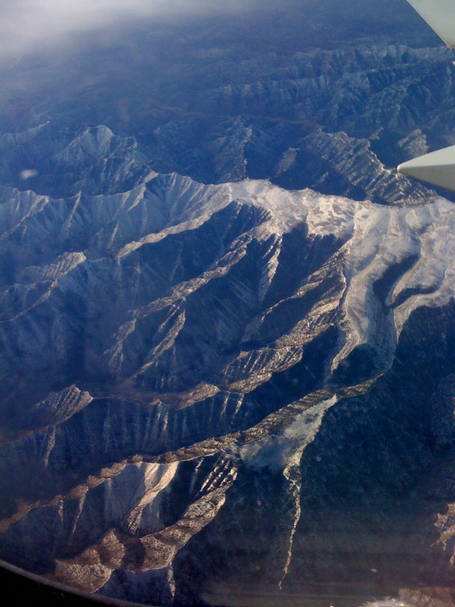 Fortified by In 'n Out Burger, I got on I-84 West and went north, hoping the roads would hold and I wouldn't have to spend a night a.) in any number of roadside Idaho hotels, where I would surely be lured into a murderous game of kill-or-be-killed by the demented owners, or b.) sleeping in the car and waiting for my beef jerky to run out while the wolves and mountain lions used coat hangers to jimmy open the doors.

You will learn very quickly driving alone out west that Westerners in general are born inured to the terror their landscapes can provoke in lesser people. There's things that Southerners hold advantages in, sure: we're hard to impress when it comes to obesity, corruption, and outlandish behavior for example. We use guns for household chores other people wouldn't imagine guns could be used for, and tend to keep animals as pets that few others would consider possible pets. A neighbor of my attorney's in Stuart, Florida kept a Florida Panther, an endangered species surrounded by some of the most draconian legislation imaginable, like a housecat in her backyard. It killed every dog in the neighborhood, something she had to pay out significant settlements for in the end. That's funny, but it's less surprising if you're acclimated.

Acclimated does not describe looking off through a cloudbank to your right and WHOA HELLO MOUNTAINS. Big, honking mountains, jagged geological teeth just jutting the hell out of the earth's jawbone. There's a lot of American roadside standard on the way up to Boise, and your fair share of aluminum sheds and cows.* but there's also some spectacular scenery along the way that the locals regard as prosaic and unremarkable. (And since I'm typing this, the roads were fine despite snow and rain the whole way up. Only one peel-out at the gas station happened due to weather, and to be honest that was more fun than frightening.)

*This is really one of the few American constants: a deep and unabiding passion for ugly aluminum storage sheds. They are everywhere regardless of clime, locale, or culture. 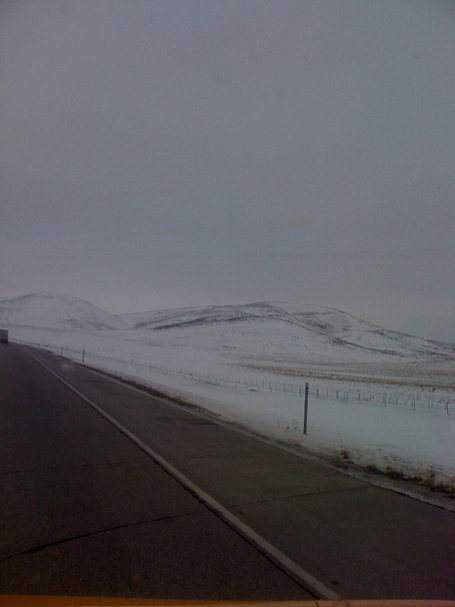 THE VIBE: Someone described Boise as a kind of "poor man's Austin," which seems grossly unfair to me given Austin's inability to compete with mountains and Boise's inability to compete with hipsters. Boise has a small-town feel with midsize amenities: ample craft beer, nifty little restaurants tucked into the nooks of its downtown, and a good-sized school smack dab in the middle of the city. It's also cold in the winter, but Miami is death in the summer with a side of heat stroke and a broken car window for dessert. No place is perfect.

It wasn't really that cold, and I know because I walked around the campus in it while wearing only four layers of clothing. Boise State itself, while growing, can't compete with a place like Blacksburg, Iowa City, or any other campus-y campus for lush quads. What it can do is offer a few things other schools don't, like a healthy sense of humor... 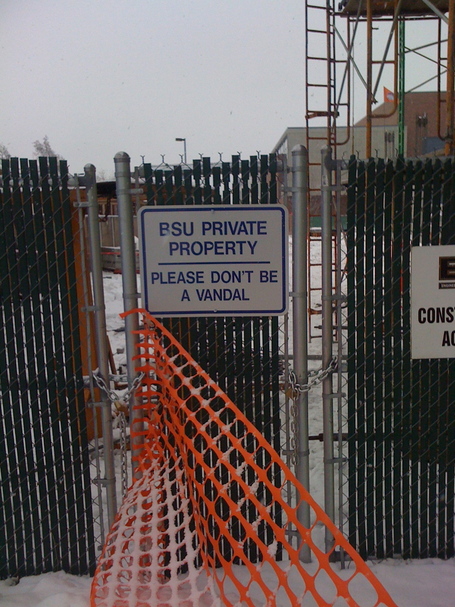 ...and free parking right under the lip of the stadium itself. 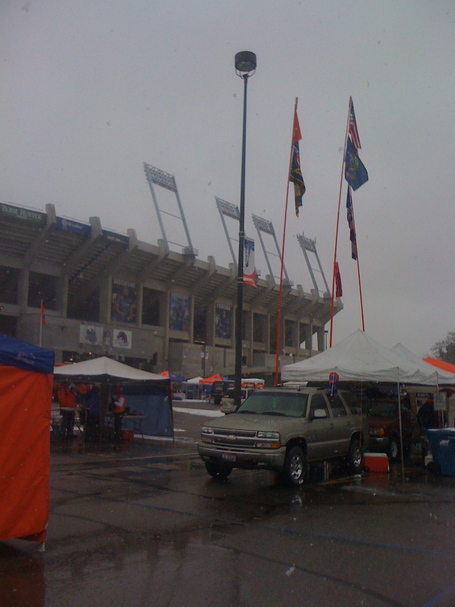 That is the primary wonder of Boise: that a school with a national profile is still small enough that its fans can roll up and park underneath the Austin Pettis banner, set up shop, and proceed to tailgate in a spot that at Florida would require a Bull Gator level donation and that at Auburn would be no less than $4,000. I'm not mentioning that to decry the increasingly exclusive prices surrounding program access at many top 25 schools. i mention that to say that Boise, relative to other schools, is a hell of a deal in terms of price, and would certainly be the economist's choice for bang/buck ratio in terms of entertainment dollars.

Boise fans obviously know this, since their cold weather tailgates come loaded for bear-weather with an array of propane-fueled fire pits, heaters, and barbecue grills only affordable for fans who didn't have to waste money on expensive booster contributions and pricey parking decals. If The Road were a grill, this is what it would look like: 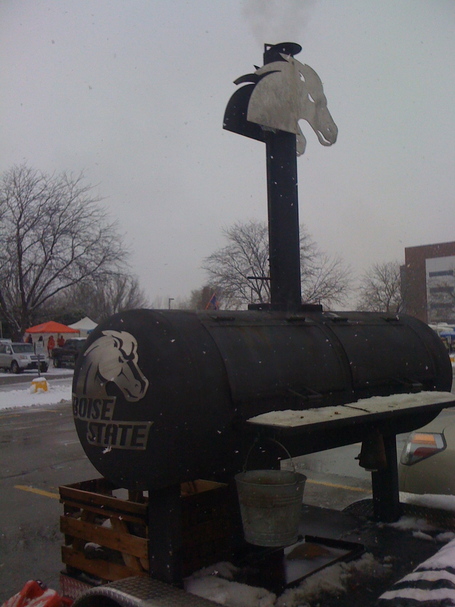 The scene inside the stadium is precisely what you would expect out of Boise: small, seemingly overmatched by its surroundings, and surprisingly fierce. I had tickets for the 40 yard line. A group of tailgaters I'd fallen in with insisted this wouldn't do, and after loading their pant legs with 16 oz cans of Coors Light and hidden flasks dragged me into the stadium with them. Until my chief compatriot was kicked out for drinking too brazenly in the stadium, I spent the better part of the first quarter rushing to the fence to pound the endzone padding, racing back to avoid the ushers, and then running five yard sprints back and forth as the game required. it's fun, even with the whinnying horse noise they play over the PA speakers.

In sum, it's a live crowd more raucous per capita than most you'll find. It's not the gladitorial death bowl you'll find at Florida, Ohio State, or Autzen, but make no mistake: it's loud, and the fans make up for lack of numbers with sheer noise. They also make entertaining signs. 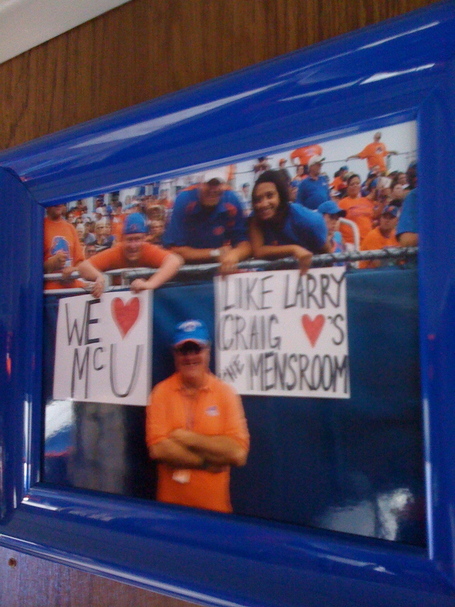 Me: Is that good?

FOOD AND BEVERAGE: In food and beverage, we ate at Bar Gernika and had basque chorizo and beer. Sadly, we missed Beef Tongue Saturdays, a mistake we will not make twice. If freshly made pork sausages and croquetas don't warm the cockles of your heart while clogging it, you don't know what's good in life. Goldy's for brunch was also superb, and yes, they do have like eleven thousand varieties of potato on the menu. Don't expect quick service, because everyone in the entire state is eating there. That's only 1.5 million people total, but it's still a lot for six waiters and four cooks to handle.

Another mistake we will only make once: 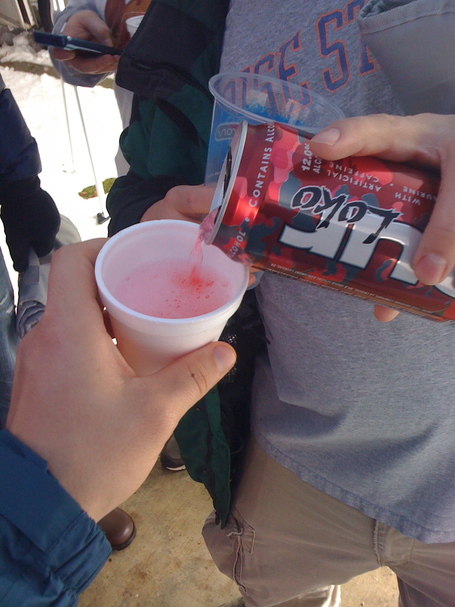 The savor of homelessness: we have tasted it. Boise football fans either abstain because they are Mormon, or they drink everything thrown their way because they are not. The idaho Vodka wasn't bad, but combining it with everything else in an all-day suicide Slurpee from hell was. You have been warned.

OVERALL RATING: B. Mostly circumstantial, since the weather was abysmal, the matchup with Utah State was meaningless after Boise's loss the prior week to Nevada, and the turnout--while enthusiastic--wasn't full capacity. I am a tough grader, and a B is still a full and enthusiastic recommendation for one of college football's quirkiest and least-visited outposts. (And the people get a full A for their hospitality and humor in a dark football situation, and I'm not just saying that because they gave us far, far too much free booze.)