Share All sharing options for: EDSBS'S BEST IN CLASS: WEEK 10

HAND UP!  Boise State, 8-0 and fresh off a 42-7 shellacking of an unterrible Hawaii outfit, could miss a BCS bowl berth entirely, and no, there's absolutely nothing we can do about it. New Mexico would also like to share that they finally notched their first win of 2010, although why Mike Locksley's hand is raised in a clenched fist is anyone's guess!  Haha!

SUPERSTAR! Tilting this award from a genuine appreciation of stats to a more EDSBSian worldview in the wake of everyone having world-beating box scores, Stephen Garcia might get to go the SEC Championship despite still being repeatedly benched into November, and (Fearless Leader totally called this one) Vontaze Burfict essentially ruining AZ State's upset bit of USC by acting just how we like him to act.

SIT STILL! At a high enough speed, objects moving at a low enough speed will be perceived as remaining entirely motionless. In related news, our beloved Angry Ostrich Battalion headed by Colin Kaepernick put on a pinball show against our also-beloved Yarbnalls, with 63 points, 844 yards of offense, 38 first downs and 91 plays.

IMPROVING!  It's UCF's turn to scare us. The 7-2 Knights are ranked, 25th in the AP poll and 23rd in the Coaches', and have only Southern Miss to clear before presumably coasting past Tulane and Memphis to end the season with at least nine wins. [uncontrolled shivers]

I BUMPED MY HEAD! Texas is well and truly concussed at this point, but our chief concern is for the health of Tommy Tuberville after Texas Tech beat Mizzou by more than a field goal. If the scorection lasts more than four hours, Tubbs, please decamp to the WAC.

CREATIVE! Friend of the program The Gurgling Cod's eyewitness account of another Tom O'Brien milkfart of a loss:

Trailing by a point, with three minutes to go, TOB punts on 4th and 1 from Clemson's 43.* The punt travels four yards. Clemson goes three and out. The ensuing snap is several yards wide of the punter; Dawson Zimmerman reaches out and grabs the punt with one hand, like a Williams sister going to the baseline, and punts rugby style to the NCST 15. *Bitch mentality achievement, unlocked!

BUSY BEE!  Navy and East Carolina scored 111 points on Saturday and oh dispense with the jokes and just LOOK AT THIS FUCKING BOX SCORE: 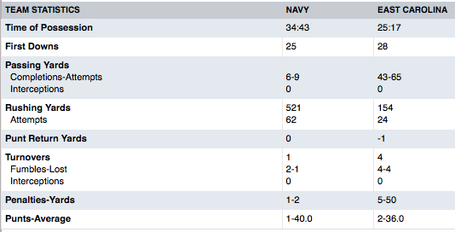 TEACHER'S PET! Oklahoma State, dotting all their i's when they're not playing Nebraska, finds themselves ranked in the BCS top ten. Only one more big chance to screw this up: Bedlam, coming Thanksgiving weekend to a television near you.

YOU TRIED!  We reiterate: Even in defeat, Paul Rhoads is working some sort of arcane demigod magic in Ames, and even in defeat, those with a stake in that game concur:

Paul Rhoads made the right call.

Not just because when you have a chance to win the game you take that chance, not even because since the debacle in Arrowhead stadium last year makes me nervous whenever ISU lines up for a PAT. No, the reason it was the right call is because Iowa State plays to win, not to not lose.

Iowa State plays to win. We're well and truly through the looking glass.

TAKE TURNS! Illinois and Michigan, in the most glaringly obvious sticker-bestowing of the season, outscored actual NBA games Saturday afternoon, en route to accumulating over .7 miles of offense, and that's not all:

1.    In the second quarter alone, the teams combined for 49 points.
2.    Denard Robinson had 367 yards combined passing and rushing and accounted for only 54.2% of Michigan's total offense.
3.    Robinson compiled those numbers despite not playing in the fourth quarter or overtime.
4.    Roy Roundtree set a new Michigan record for receiving yards with 246. He was second on the single-game list after his 192-yard first half.
5.    Illinois punted six times.
6.    Conversely, Michigan's defense forced six punts.
7.    The game was the highest-scoring Big Ten contest in history. It topped another Michigan victory — by the 1902 Wolverines, who blanked Michigan Agricultural College (now Michigan State) 119-0.

GOOD HELPER!  Utah, supporting our troops in the most dismal fashion imaginable but also doing voters the service of eliminating themselves from the non-AQ scrum in the BCS top five. Also helpful: UCLA, for unclogging the presumptive race for the Rose Bowl in the Pac-10 by toppling Oregon State, and Miami, for serving as the bedazzled bizarro linchpin for an entire conference:

JAUNTY POSSUMDRAGON! Where to begin this week? Colorado allowing a miserable Kansas squad to score 35 fourth-quarter points? UTEP knocking off SMU? Both of these, but forget not the JAUNTY POSSUMDRAGON award's namesake, LSU, for plummeting to earth in jubilation instead of in smoke, and for crushing wee Nick Saban beneath its bulk as it lands to feast on the fescue of Tiger Stadium. Les Miles eats grass. Of course he does.

Honorable mention: Cal notches their first road win of the season ... in Pullman. By a touchdown. If you really want to drop your teeth, look at their home-road splits in a dark room.

GRAPE JOB! That this year's Big East gets to send a team to a BCS bowl is an affront to the game of football.  There exist scenarios in which an eleven-loss Pitt team could skate in alongside the exclusion of Boise State. (We exaggerate, but not much.) For the moment, this is fairly jelled unless the Panthers start losing and things get rill hairy, but if you'd like to make your fanblood run cold, read this crackerjack ACC nightmare scenario analysis by Patrick Stevens.