MAD WAGERIN', WEEK TEN: THE UFBA LETS UP A BIT

Share All sharing options for: MAD WAGERIN', WEEK TEN: THE UFBA LETS UP A BIT

Peter stays afloat in rough waters this week's edition of Mad Wagerin' as the week ten schedule enters the home stretch. You might want to follow him at @clevelandfrowns on Twitter, or read his daily bidness over at Cleveland Frowns. We don't really have a picture for his piece today, so the soup of the day is nonsequitur whiskey. Enjoy. 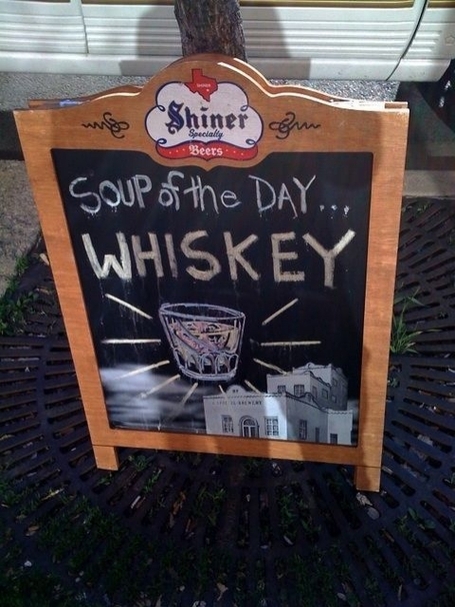 The Universal Force of Bad Action finally let up last Saturday night with an Oregon cover in Los Angeles. All the public people were there,* and us too, on only our second shot at getting over on this thing. It's the best sign yet that we're getting a handle on things here after having fiddled around at the .500 mark for nine weeks. It also tells us, along with two AQ-unbeatens having fallen last week to leave only two remaining, that the season has broken firmly into a third phase. With the bankroll still in tact, it looks like time to step on the gas a bit:

Utah +5 over TCU (10 units) (3:35 PM ET, NO TV, WTF?!): It all started for us this season in Utah when we rode Wannstache to a glorious push. I'm not inclined to think that things wouldn't have gone significantly differently for Pitt this season had they been able to get off on a different foot there, which is to say that win for Utes looks undervalued. I don't expect either coach to be outschemed here, and there doesn't look to be any reason to believe that Utah is so outmanned by TCU that they won't be able to stay within five. If anything, it looks like the story might go the other way:

The loss of NT Kelly Griffin to a season-ending ankle injury makes TCU's defense susceptible to cutback runs against zone blocking, and that could be bad news against Utah's zone read-option attack. Cory Grant moved inside to nose guard to replace Griffin, and 268-pound D.J. Yendrey stepped into Grant's spot, and Yendrey is not stout enough to hold his ground against double-teams.

On zone plays away from Yendrey the backside guard and offensive tackle will combo-block Yendrey up to the second level with the guard getting on a linebacker, while the tight end will wall off the defensive end. Yendrey will be overwhelmed by bigger offensive linemen, and 230-pound Utah RB Matt Asiata will have an easy time recognizing the cutback lane.

Asiata is an effective one-cut runner and won't waste time getting into creases when he sees them, and backup RB Eddie Wide also has the burst and mobility to exploit seams.

TCU hasn't had anything that could be remotedly described as a test away from home yet this season. Utah's 21-game home winning streak is the third-longest such streak going.   The Utes avoided a trap last week at Air Force, while the Horned Frogs enjoyed a week of back-patting for Baylor having beaten Texas. TCU, much better equipped to stop Baylor's air attack than the Utes on the ground. Love Utah playing at home against an opponent more burdened with expectations here.

Stanford -9.5 over Arizona (8 units) (8:05 PM ET, ABC/ESPN): The two dominant forces of the 2010 college football season play prominently on this one; the Bad Action Force and the Oregon Ducks. Stanford held up as well as anyone against the Ducks, while Arizona's signature win this season, against Iowa at midnight in the desert, was substantially aided by the other (the same reason we went against Missouri last week). Plus, Jim Harbaugh has the fiery bag of dicks thing going like nobody else right now. Hard to see Stoops holding up here.

Oklahoma State -7.5 over Baylor (7 units) (12:30 PM ET, ABC): We're keeping after the angle that, thanks to T. Boone Pickens, Oklahoma State is now sort of a perennial power and nobody really knows this yet. Expecting an 84-63 final here. While we're in this part of the country and talking about keeping after angles...

LSU +6.5 over Alabama (7 units) (3:35 PM ET, CBS): Another dream that's still technically alive right here. But more, you can call this a pro-Malzahn/Newton play. That those two ran through you for an afternoon shouldn't really mean that anyone else is really any more likely to do the same. 6-3 final here, one way or the other.

That's all for this week. Arky/Sakerlina is the one that got away. Your feedback on these and the rest is necessary as always. Thanks.

I'm 19-22-4 (-14 units) picking this season against the spread so far here and 22-23-4 (-12 units) counting the additional picks published at Cleveland Frowns. (NOTE: One unit is one percent of your bankroll for the season).

*"When you see Oregon in a spread that is low, it is going to attract every public person to bet Oregon." - Ed Salmons, college football expert, Las Vegas Hilton