Share All sharing options for: THE VEHICULAR METAPHOR EXTENDED PAST BOISE STATE

If Boise State is the "bus," Pat Forde, here's the rest of the top 25 done in a vehicular metaphorical fashion.

Oregon: The F-22 Raptor. Death from above at high speed and with an unbelievable rate of fire. Handling is indescribable. Is actually piloted by a highly intelligent and evolved Velociraptor.

Auburn: Tomahawk Motorcycle.  Fast, contains one driver, and no defense in event of emergency.

Alabama: Jaguar. Will break down once in epic fashion. Luxury the rest of the way, except for that one part that just keeps breaking (Julio Jones' hand.)

Nebraska: 1980 Toyota Pickup truck. Sometimes things fall off of it, but it always runs.

Stanford: Airbus A380. Powerful, luxurious. Not too good when it runs into a flock of ducks.

Arizona: Kickass van with moonroof, a few empty beercans rolling on the floor, and coiled rope and handcuffs in the back.

Missouri: An elegant, light, and maneuverable $10,000 road bicycle. When you ride it into a thresher, it and you both die. 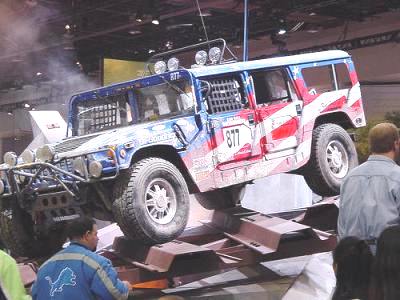 Michigan State: A MiG-29 at an airshow. Soaring, speed, adventure, and then a quick and horrific fiery crash into the ground.

Mississippi State: Honda Civic. Does what it has to do, man, and all under budget.

Baylor: Kia Rondo. It's good. No, really. We promise.

Nevada: Kickass Grand Wagoneer with lift kit. Only good in certain situations, but in those certain settings is unstoppable.

BONUS METAPHOR AFTER THE JUMP FOR TENNESSEE, FLORIDA, MICHIGAN, NOTRE DAME, and TEXAS!