We went to Blacksburg this past weekend to watch Virginia Tech attempt to relegate UVA to the Colonial League. Observations follow. 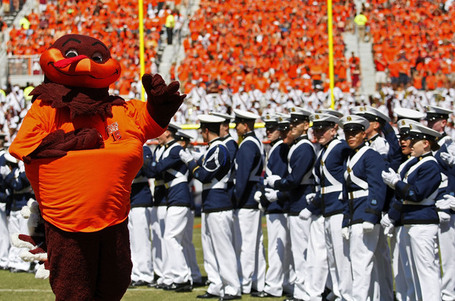 MY THIS IS PRETTY. Before anything, you should know that Blacksburg sits in a beautiful part of the world, perched in a nook surrounded by the eroded nubs of the Appalachian Mountains. There's cows and fields and everything. It is not like when someone tells you, "Oh, it's really pretty," and then you go and discover that you have been referred to a spot of the world that is a four-lane highway surrounded by dense brush choked with trailers, aluminum storage sheds, and strip clubs so desperate you wouldn't wish your worst enemy a lap dance from them. I'm not talking about large sections of North Georgia and North Carolina, but I am.

The area surrounding Blacksburg really are country purty: cows, mountains, and on this weekend, blue skies cut with a cold wind capable of slicing through even the hardiest of underpants.

THE VIBE. I mean this as the highest form of compliment: you could be SEC fans, Virginia Techsters. Typically the turnout for rivalry games against an opponent suffering from deep football anemia isn't the best. Students stay home, alums ponder whether going out in the cold is worth it, and local randoms hold on to the fistfuls of tickets they hoped to scalp and consider burning them for warmth. It is typically not a good scene.

Not so in Blacksburg, where a good crowd sat in the cold and did what Virginia Tech fans do best: complain about their offensive coordinator. It didn't really matter what Brian Stinespring called: UVA wouldn't have stopped a Tecmo Bowl playbook on Saturday. Some Hokies fans might find this sentence redundant, and well, it is. UVA failed to stop a Tecmo Bowl playbook on Saturday, and this greatly pleased VT fans who got to say things like "THAT PLAY WAS TERRIBLE EVEN IF IT DID SCORE A TOUCHDOWN."

Enter Sandman is everything it is cracked up to be, even with the alumni who either jump reluctantly on creaky knees or stand there doing the acceptable substitute of nodding their head along. James Hetfield thinks it's metal enough, and so does the Virginia Tech band. The whole band, seated in a spot of glorious obnoxiousness right in one endzone, bounces with a coordinated vertical bounce that Fenerbahce fans would admire. Note to any other schools on the planet: the band should be in the endzone and move each quarter to the opposing endzone. I'm not sure how this can be achieved, but Virginia Tech is a tech school. I'm sure they can figure it out.

Overall it's thumbs-up all around to Lane Stadium and the crowd, a brown liquor army wearing the earth's only combination of Realtree, purple, and orange. Even the turkey call--which to be honest, is completely absurd--doesn't sound so ridiculous in person.

Girl 1: I didn't go to UVA so I could remember football games.

FOOD AND BEVERAGE: Turkey legs in the stadium are a must, and double nicely as a handwarmer until you get too hungry to resist eating said handwarmer. Outside I got good-to-passable barbecue from tailgates, though again, when it was as cold as it was in the stands eating hot food is always a mixed blessing due to loss of possible hand-warming sustenance.

As far as drink, I was told to "Rail, rail, and then rail again." This refers to the infamous signature drink of Top of the Stairs, the off-campus bar where a bartender will happily pour one of everything off the cheap rail of liquors into a plastic cup, top with soda and grenadine, and then dare you to drink it. It tastes like cough syrup and an instant investment in regret, but that's college for most people, and is therefore appropriate. Cough syrup isn't necessarily a bad thing if we're talking Triaminic, and oh, dear reader we are definitely talking Triaminic and not NyQuil.

It is a first-rank drink for those who want second-degree burns on their soul and a future third-degree burn of a hangover. This assessment makes it a truly classic college town beverage, and receives the full endorsement of this blog's cocktail council

OVERALL GRADE: B+. Blacksburg only loses points for circumstance, i.e. a noon kickoff against a rival who failed to show up for the game. Otherwise, Virginia Tech is one of the most underrated campus experiences in college football with all the fundamentals delivered in strong abundance: stadium, campus, scenery, superb crowd presence, ritual, pomp circumstance, and appropriate comestibles for the occasion.*

*Don't sweat a B+. As engineers and technical types, you have to appreciate a tough grader. We only have two A's in the entire list of places we've been, and one of them is our home stadium (completely biased Florida fan) and the other is Baton Rouge, which may or may not exist in the same dimension we inhabit.