ALL HAIL THE ALPHABETICAL. There's lots of back-patting for Auburn in the Alphabetical: after all, it has taken a few days to consider what the Tigers were able to pull off against Alabama on the road with an absurd 24-7 lead, but the best part of the whole thing is probably this picture: 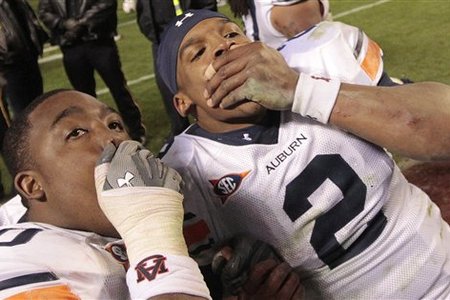 ADDITIONAL QUALITY CONTENT ELSEWHERE: TThis Week in Schadenfreude is great all by its lonesome, but it led us to Muscle Hamster, and yeah: MUSCLE HAMSTER LEAD US TO WISDOM AND HAPPINESS.

BUMMER BRAH. Stephen Garcia's injuries--a shoulder and a thumb, both "dinged but playable"--have taken the SEC Championship Game off the board in some quarters of Vegas. Nick Fairley will love him, squeeze him, and call him "Murdered."

GRUDEN, INTERRUPTED. The Gruden-to-Miami rumors are dying a swift death, and this means they are either completely bogus or they are this close to happening, Miami fans!  Hey, how about Jeff Jagodzinski? No, we're actually kind of serious. He's in the UFL, No, seriously, he's not a bad coach, and is kind of like Petrino if Petrino smiled, needed sleep, and didn't have to keep moving all the time to move oxygen through his gills.This is all academic because you know Uncle Luke is getting the gig, but it do pass the time to tell such tale, dear.

SHOW YOUR GOLDEN HAHAHA GET IT. Al Golden to Vandy might not be a bad call at all, especially since Joe Paterno is busy shelling small villages on the Pennsylvania/Ohio border and seems to be quite feisty for a 733 year old. You say Vandy and think, "What man could stand such pain on a yearly basis?" Al Golden smiles at your conception of pain from the seat as head coach at Temple, SEC fans.

MISSISSIPPI IS A FUN STATE. Houston Nutt denies any involvement with any other job ever, and Dan Mullen told his team they were never losing to Ole Miss ever again. As long as Nutt actually isn't involved with any other job ever, this may in fact be true. Houston Nutt also had nothing to do with severe storms that damaged a trailer park in Starkville, but Jimmy Sexton won't deny it if it gets Nutt a few more bucks out of Pete Boone.