Share All sharing options for: THE CFB BUYERS' GUIDE: RIVALRIES

Thanksgiving weekend also meets Rivalry Week, so in addition to navigating the critical starch dilemma between stuffing or mashed potatoes, you'll also have to make a decision as to which games to watch or attend. To help you with that decision, we took our weekly trip to the Consumers Union labs and ran some of this weekend's most heated rivalry games through a complete battery of tests. When all the numbers were tallied up, we had a pretty good idea which grudge matches you should put on your plate and which ones you should save for when you're sleeping off a third slice of leftover pumpkin pie. 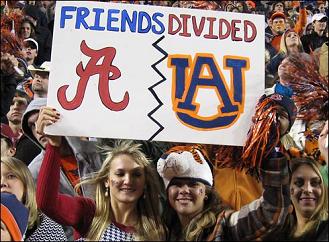 THE IRON BOWL (ALABAMA-AUBURN) | ■ ■ ■ ■ ■
Highs: Unbeatable in terms of seething hatred, and hey! Both teams are actually good this year!
Lows: Farcical lack of self-awareness inherent in any two people from Tuscaloosa and Opelika trying to redneck-bait each other.
You may have your Commonwealth Cups, your Old Oaken Buckets, your Stanford Axes and your Floyds of Rosedale, but you don't need a trophy when either of the fan bases in your rivalry would be perfectly happy to pull up a camp chair, eat popcorn and watch as the other team's campus burned to the ground. That has typified the Bama-Auburn rivalry even when only one team (or in rare cases neither team) has been competitive, and now that both teams are ranked in the AP's top 10, the stakes (and tempers) have only gotten higher. Which storyline tickles your fancy: Bama, getting a little anxious at Gene Chizik's improbable ascendance and eager to show the world that Saban still runs the state? Auburn gunning for an SEC title and a shot at the national championship, yet still trying to work their way out from under UA's historical shadow? Maybe it's the realization that Auburn can now afford to pay as much for players as Alabama once did. The only storyline that doesn't quite ring true is the idea that there's any daylight whatsoever between the two fan bases; seriously, you're both a bunch of loud, fratty drunks, either of whose alumni communities could singlehandedly keep the Bass Pro Shops empire in business, so let's dispense with this notion that either one of you has any claim to superiority in the redneck category. In a way, though, that surreal quality just adds to the fun. It's not like you have anything else to do on Friday anyway, so we heartily recommend kicking back at 2:30 p.m. and watching the Yellowhammer State's best and occasionally brightest try to murder each other for 60 minutes. 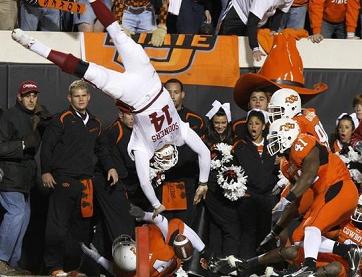 BEDLAM (OKLAHOMA-OKLAHOMA STATE) | ■ ■ ■ ■ □
Highs: Impressive scoring production, potential for a rant from either Mike Gundy or T. Boone.
Lows: Sooner domination detracts from the suspense, blah dining options.
Come again? How can anyone call this a rivalry when the Sooners have won four of every five games, including the last seven straight? Two things: One, this game has been a points bonanza in recent years (averaging 62 total points over the last eight matchups), and two, it should be a better game this year than most, with the final Big XII North title up for grabs. It's an interesting contrast of styles between Bob Stoops' bland, lobotomized more-or-less-competence and Mike Gundy's flamboyantly gelled, be-Oakley'd lunacy; this year Gundy actually comes into the game with a slight edge, having cobbled a group of underclassmen and last year's backups into perhaps his most fearsome squad of scoreboard arsonists yet. And even if OSU loses an eighth straight, well, that's just an excuse to sit by the TV and wait for Cowboy uberbooster T. Boone Pickens to fly into a rage and decapitate Gundy with a wind turbine blade. 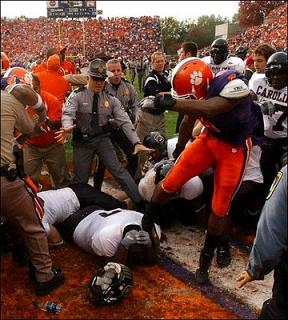 CLEMSON-SOUTH CAROLINA | ■ ■ ■ ½ □Highs: These days one team or the other might actually be playing for a conference title; inspires actual brawls.Lows: Needs a catchier name, both rosters might have a total of 37 brain cells between them.Viewed one way, Clemson-USC is like a slightly poorer man's version of the Iron Bowl. Historically, it hasn't had Alabama-Auburn's national implications, but what it has had is blind, homicidal rage, the kind that (as you can see above) isn't necessarily restricted to the fans. Writ large, the rivalry dates back long before either school ever suited up a single football player, as Clemson's mere founding triggered a vicious battle between factions in the state's capitol; six decades later, with a horrified Strom Thurmond watching from the stands, a Clemson fan strangled a live chicken to death on the field. Depending on whom you ask, the bile of the rivalry sometimes obscures what is frequently less-than-stellar play on the field; it says something when, for a second straight year, a team comes into this game headed for a conference championship matchup yet is in no way assured of beating a fairly mediocre opponent. Like stadium nachos, though, materials of questionable quality rarely make this game any less satisfying. 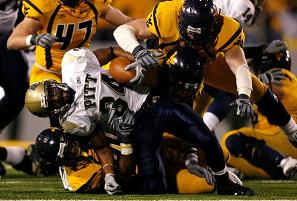 BACKYARD BRAWL (PITTSBURGH-WEST VIRGINIA) | ■ ■ ■ □ □Highs: The high comedy of Dave Wannstedt and Bill Stewart in a nationally televised slapfight.Lows: The awful realization that one of these teams might just bone TCU or Boise State out of a BCS bid.Even if Dabo Swinney and Stephen Garcia live down to everyone's worst expectations in the Clemson-Carolina game, that matchup will still look like a Spassky-Fischer chess match compared to whatever Dave Wannstedt and Bill Stewart cook up Friday night in Pittsburgh. There's a trainwreck-like attraction whenever these two coaches try to out-clock-mismanage one another for four quarters, yet there's also an undercurrent of sadness in watching two proud programs reduced to such shenanigans, like if Dan Marino and Don Nehlen somehow ended up on "The Surreal Life." Then you've got to grapple with the realization that one of these teams might very well end up with a BCS berth that might otherwise go to TCU, Boise, or Stanford. There are much worse options for Friday-afternoon viewing (the Louisville-Rutgers undercard springs immediately to mind), but this game's poor nutritional value causes us to stop short of giving it our full recommendation. 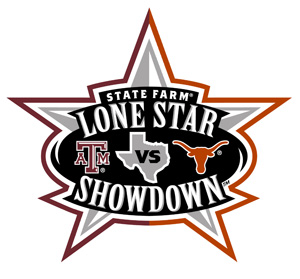 LONE STAR SHOWDOWN (TEXAS-TEXAS A&M) | ■ ■ ■ □ □Highs: Charming mascots, frequently a good game even when it shouldn't be.Lows: Between the tryptophan, Mike Sherman, and Greg Davis' offense, do not watch while operating heavy machinery.If you had to dream up the ideal college football rivalry in your head, the resulting fantasy would probably look a lot like Texas-Texas A&M -- storied institutions fighting for supremacy in the same state, football programs bursting with pride and history, bleachers packed with suntanned blondes whose aggregate hotness can be measured in megatons. There's just one thing deflating what would otherwise be a grand matchup this Thanksgiving night, and it is that the once-proud Longhorn fans all seem to want to kill themselves these days. And with the 'Horns inexplicably on the ropes this year, we've got a sneaking suspicion of how this year's matchup is going to play out -- at the direction of the soon-to-be-toast Greg Davis, Texas' Garrett Gilbert serves up the football on a silver platter over and over again, with Mike Sherman using the opportunity to slowly gum the UT defense to death in as drama-free a manner as possible. UT's desperation for a bowl bid might inject some excitement into the proceedings, but otherwise the combination of Davis, Sherman, and your belly full of turkey and dressing do not make for a lively evening. We can recommend this game for Texans and Big 12 diehards, but not for the elderly or nursing mothers, and definitely not if you have to drive someplace right afterward. 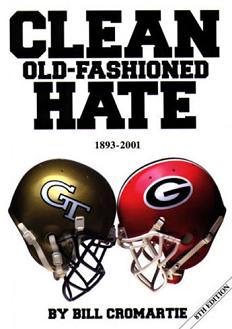 CLEAN OLD-FASHIONED HATE (GEORGIA-GEORGIA TECH) | ■ ■ ½ □ □Highs: Stark contrast between the two fanbases, attractive settings, desperation adds an air of drama to the proceedings.Lows: Combined record of 11-11 speaks to a distinct lack of quality control.For a long time the Georgia-Georgia Tech grudge match stood as one of the more underrated rivalries in football. Like the Lone Star Showdown above, it had plenty going for it -- the gorgeous backdrops of either Athens' tree-lined campus or the midtown Atlanta skyline; a fascinating contrast between the obnoxious red-and-black-clad drunks on one side and the pasty, socially inept Techies on the other; and occasionally you'd even get a competitive matchup out of it. But then Chan Gailey's reign of blandness drained the drama right out of the rivalry, and just when it looked like Paul Johnson's arrival on the Flats might liven things up again, both teams went into the tank. Tech needs a win here to rise above another pointless western road trip to face a Mountain West team in a bowl game nobody's going to watch, Georgia needs a win to go to a bowl game period, but other than that little bit of drama what you've got is two teams who are a combined 11-11 and no more relevant to the national picture than your average Conference USA squad. We advise both programs to reassert some quality control in their products before this game falls off the national radar entirely. 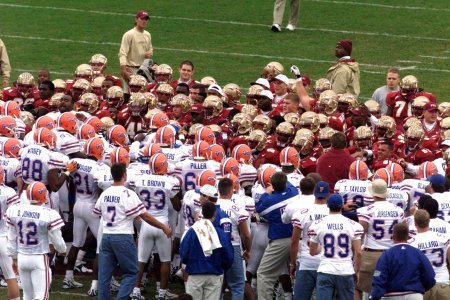 FLORIDA-FLORIDA STATE | ■ ■ □ □ □Highs: Two proud fan bases that are not above stabbing each other.Lows: From a national perspective, at least, it's a shadow of its former self.A decade and a half ago, this game had asserted itself as the premiere rivalry in college football. Not only did the two sides hate each other with a radioactive passion, the programs themselves were pretty good, with one or the other (and sometimes both) being in the running for a national championship. As with so many other top corporations, though, a brain drain in upper management slowly took the life out of the rivalry -- first Mark Richt, then Steve Spurrier, then any remaining competence on the part of Bobby Bowden. Urban Meyer's stranglehold on the rivalry from his very first year in Gainesville sounded the death knell for UF-FSU's national prominence, and even with the Seminoles poised to actually win one this year, it's still barely raising a pulse. You can chalk that up primarily to the Gators' malfunctioning Addazio component, which has had the usually brash UF fan base in wrist-slitting mode for weeks now. (Incidentally, The Addazio Component is also an unpublished Robert Ludlum novel that the author gave up on halfway through, calling it "a muddled, predictable mess.") With the 'Noles showing signs of reasserting themselves, this rivalry might turn into an important one again sometime in the next few years, but we'd advise buyers to be very wary of the lingering quality-control issues until it does. 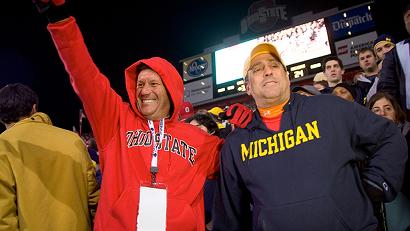 THE GAME (MICHIGAN-OHIO STATE) | XBlasphemy? Yeah, probably. For years this was one of very few rivalries that could stand up to Alabama-Auburn and Florida-Florida State on an annual basis in terms of both national implications and fan hatred. It boasted an entire Dickens novel's worth of legendary characters, from Bo and Charles Woodson to Woody and Vic Janowicz; there were Snow Bowls, there were "Ten-Year Wars," there was even the occasional bit of political intrigue. But then Jim Tressel showed up, and as with so many other things, his presence just sucked the life right out of The Game. Now it's 2010, tOSU has won six straight and eight of the last nine, and nobody outside of Rich Rodriguez' immediate family (and perhaps not even them) believes the Wolverines stand a chance in hell of pulling out the win in the Horseshoe. Even the most aggro of SEC partisans can't take a whole lot of sincere pleasure in seeing this game reduced to an afterthought on the national stage, but that's what it's become, and until a Wolverine resurgence (or Greg Robinson's grisly murder, though those may have to be a package deal) turns things around, we regretfully give The Game our Not Acceptable rating.