Share All sharing options for: THE CFB BUYERS' GUIDE: DEFENSES

If defense, as the saying goes, wins championships, then it's obviously a critical investment on your family's part. We made our weekly trip to Consumers Union's state-of-the-art testing laboratory with a number of DI-A defenses in tow to see which ones present the best value for your money and which ones would just sit there picking dandelions in the defensive backfield while opposing players high-stepped into the end zone. Some of our results may surprise you.

TEXAS CHRISTIAN | ■ ■ ■ ■ ½
Highs: Diabolical against the pass, coordinator goes by "Dick Bumpas."
Lows: Has yet to be truly tested, mascot still frightens small children.
Never mind that they lead the nation in both points and yardage allowed; never mind that they pitched back-to-back shutouts last month; never mind even that they've only granted two teams all season the privilege of scoring more than 10 points on them. The fact that their defensive coordinator's name is Dick Bumpas -- and that he has a mustache that would fit right in with those of Wyatt Earp and Doc Holliday at the O.K. Corral -- is what raises the 2010 TCU Horned Frogs up from mere defensive excellence to the level of folklore. You could say they haven't really faced an elite offense yet, but they did hold Air Force's triple-option nearly 100 yards below its season rushing average and dominated a Baylor team that's currently in first place in the Big 12 South. No offense to the Boise State Broncos, who field a fine D themselves, but it's criminal that TCU isn't getting more national-title talk from the pundits. Or that the Horned Frogs' defensive players haven't been brought into the recording studio, a la the '85 Chicago Bears, and allowed to record their own single of "The Bumpty Dance." 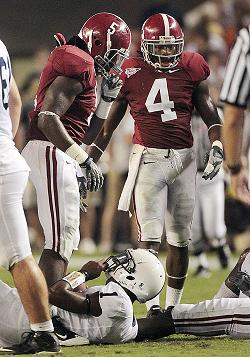 ALABAMA | ■ ■ ■ ■ □Highs: Aggressive, productive "turnover" setting.Lows: Redesigned parts still have a murky reliability record, powerless against shirtless, pot-smoking spiritual guides.Everybody rolled their eyes when we predicted that the Crimson Tide defense, fresh off losing half the starting 11 from the previous season's national-title squad, wouldn't take all that big a step back in 2010. Well, here we are in November, the Tide are still in the thick of the national-title picture, and they're still sending opposing QBs home, in the words of the estimable Kool Keith, wearing tight pants and lipstick. Some buyers seem to be sleeping on Alabama based on one unfortunate afternoon in Columbia, South Carolina, and indeed, we'd be cagey about purchasing this unit for any situation where it might have to go up against a QB with the long-haired, sticky-icky-icky-powered mojo of the brahsome Stephen Garcia (or anyone else who finds his spiritual center in the wisdom of Tiny Floating Shirtless Matthew McConaughey). With that unpleasantness behind them, though, Bama seems poised to crush three straight heads this month to build up a head of steam before facing Cam Newton in the Iron Bowl to end all Iron Bowls. 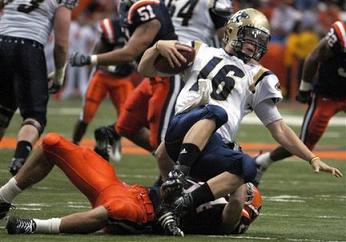 SYRACUSE | ■ ■ ■ ½ □Highs: Quiet, compact, useful both indoors and outdoors.Lows: Has looked good against less-than-stellar competition, nagging feeling that the bottom may yet drop out.The hell? Syracuse, who'd averaged exactly 0.8 Big East wins per year -- that's Big East wins, mind you, not actual wins -- over the five previous seasons, getting a recommendation as a defense to buy in 2010? You read that right: Not only are the Orange sitting squarely in the top 15 nationally in total defense, they're in second place in the league and are a single win away from bowl eligibility. The caveats we mentioned in regard to TCU's defense applies here as well -- the Orange's schedule has been ridiculous, to the point where their one truly crowning achievement was probably distracting Bill Stewart with old "Murder, She Wrote" episodes long enough to hold his West Virginia team to 14 points. And in the interest of full safety disclosure, we have to point out that their coordinator, Scott Shafer, voluntarily resigned from Rich Rodriguez's staff at Michigan after only one year for, in his words, bringing about "the demise of the Michigan program." But his work at 'Cuse has been so promising as to nearly block that transgression from our memory, and besides, it's not like he's the only one responsible. 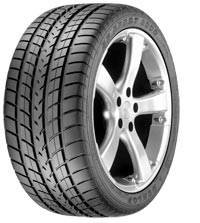 DUNLOP SP SPORT 8000 | ■ ■ ■ ½ □Highs: Affordable price, solid handling on wet roads, makes a good blocker.Lows: Mediocre grip, helpless in the 3-4.An affordable summer performance tire with solid results in suboptimal weather conditions, the Dunlop SP Sport series gets our nod as one of the better buys on the market, not to mention a stalwart obstacle to most of today's college offenses. There's a reason the "tire run" has become a staple of modern football's conditioning drills, and the SP Sport proved to be harder to navigate for our battery of offensive skill-position players than any other product in this test. Stack 'em high and they make for a formidable wall of tackling dummies, too. Of course, you'll need a lot of them to make that work, and we never did find a combination that paid off in a one-gap 3-4 front. For that reason, we can't recommend the Dunlop if you're going to be using them primarily spread-style offenses. Against more conventional attacks, however, or in parts of the country where the weather can be unpredictable, we offer the SP Sport 8000 as a perfectly reasonable (and cost-effective) choice. 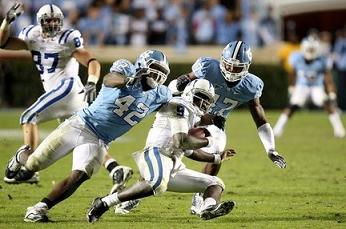 NORTH CAROLINA | ■ ■ ■ □ □Highs: Does more with less.Lows: Controversy in upper management may scare away more conservative buyers.Left for dead after their ranks were decimated by this past summer's sprawling Agentgate scandal, the Tarheels have somehow kept their heads above water, overcoming a dispiriting 0-2 start to remain in the hunt for the ACC Coastal Division title. Other than a poor performance at Miami, the 'Heels haven't let anyone crack the 20-point barrier on them in more than a month, and they've managed this despite half their starting defense being anything from "suspended" to "permanently ineligible" at any given point thanks to improper agent-related activity. It is for that reason that we can't give UNC our full recommendation, since at any moment the NCAA could bring down the "no institutional control" emascul-axe and effectively blast the Tarheel football program back to Division II levels. As a serviceable deterrent against ACC-caliber offenses, though, or a bye-week plug-in for your college fantasy team, though, the 'Heels remain a solid option. 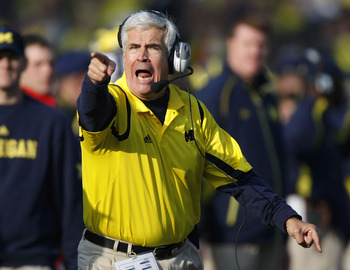 MICHIGAN | ■ □ □ □ □Highs: Well, the helmets look nice.Lows: Pass defense would get laughed off an Arena League field, poor performance of sack/turnover attachments.In our recommendation of the Syracuse defense earlier, we mentioned the caveat that Scott Shafer had had a less-than-stellar record in his previous position with the Michigan Wolverines. For a graphic example of just how much worse things could get, though -- for both the Wolverines and the Orange -- look no further than what the Orange's ex-coach, Greg "GERG" Robinson, has assembled in Ann Arbor. Robinson has had to deal with more than his share of suspensions and roster attrition this year, but it's not like he was doing all that well last year, either. To call this year's secondary "sieve-like" does a disservice to sieves, which provide a useful service in the kitchen; Robinson, however, hasn't provided a useful service anywhere in about a decade. The one bright spot for the maize-and-blue faithful is that Denard Robinson's Heisman credentials can only be bolstered by having to singlehandedly win 38-35 shootouts every single week. 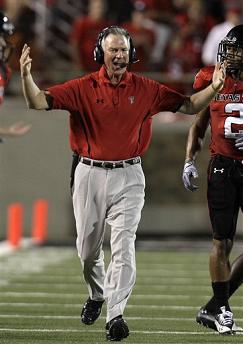 TEXAS TECH | ■ □ □ □ □Highs: If you pray hard enough they might yet have a 3-2 game in 'em.Lows: Secondary is even worse than it was before Ruffin McNeill cleaned things up.Remember when Tommy Tuberville was going to bring a hard-nosed defensive attitude to Lubbock? Ahh, a simpler time, ten months ago. Those who feared Tubbs might turn Texas Tech into something more along the lines of one of his late-career Auburn squads can rest easy, as the Red Raiders currently look nothing like a Tuberville team -- they pass all over the place but can't run worth a lick, and they can't stop anyone, either, ranking dead last in the Big 12 (and eighth from the bottom nationally) in total yardage allowed. Then again, they're 4-4 and completely uninteresting to watch, so maybe Tubbs succeeded in remaking this team in his image better than anyone realized. Give him another year or two to get his system in place and he might be able to pull another wildly entertaining 3-2 final score out of nowhere, but for now, this system just isn't worth your hard-earned dollars.

WAKE FOREST | X
There's bad defense, and then there's the just plain inexplicable. Sixty-eight points given up to Stanford? OK, that's embarrassing, but it was on the road, and Stanford's an incredibly talented team. Fifty-two to Virginia Tech? Uh, well, they're the favorite in the ACC Coastal, but they still lost to JMU, guys. Forty-eight to Duke? Sixty-two to Maryland?!?! OK, seriously, folks, I could pick any ten players of Wake's field hockey team and together we could probably hold the Terps under 60. Granted, everyone knew the Demon Deacons were heading into this season with a depleted roster, but 62 points to Maryland -- a team that hadn't scored that many in its three previous games combined -- makes us wonder if the "WF" logo on the Deacs' helmets isn't missing a letter T in the middle. This year's Wake defense should not be used to protect anything in your home, be it your valuables, your end zone, or your children; until major improvements are made, it earns our Not Acceptable rating with extreme prejudice.