Fellow SBNation blogger and edsbs.com football mastermind Spencer Hall is hitting the road and visiting top college football games, including Iowa vs. Ohio St. this weekend, as part of the Good Hands Roadside Rivalry Road Trip. Hall will team with former Hawkeyes receiver Tim Dwight to visit The Summit starting at 11 a.m. Saturday to give away 10 pairs of game tickets, prizes, food and help sign up fans for Good Hands Roadside.

[Editor's note: For those who know the always entertaining TeddyHeisman on the Buckeye Sports Bulletin forums, this adventure will seem familiar. For those that don't, this tale is written by him about his trip to the Fiesta Bowl in 2009, when Ohio State played Texas.]

I had been to numerous games at the Horseshoe and one at the Big House, but never had the opportunity to watch Ohio State play in a bowl game. In December of 2008 and January of 2009, I was attending Bowling Green State University for graduate school and was in the midst of a long (and boring) Christmas break. When I found out we would be playing Texas in the Fiesta Bowl, I asked two of my good friends if they had any interest in traveling to the game. They expressed their interest, we found some tickets on Ebay, then started making travel arrangements. Initially, we had planned on flying, but the flight costs were a little higher than we had anticipated. We decided we would drive a 2002 Hyundai Santa Fe all the way across the country. In hindsight, this was probably a bad decision because that car is absolutely horrible on gas.

A few weeks before the game, another brilliant idea came to us. My friends and I are big fans of the show "It's Always Sunny in Philadelphia." This show features a character who wears a green, full-body spandex suit to various sporting events. We thought it would be interesting if there were three people running around in these suits (scarlet and gray, of course) in Glendale. We looked on Ebay and sure enough found a seller who was willing to put these together for us. The seller was from China, and it was basically impossible to communicate with her. Apparently these outfits are actually sold in some sort of "sex shops" in China. Regardless, this ended up being a huge fiasco. I was the only person who got the suit in time to bring it on our trip. My friends were disappointed, but I figured I would go ahead and be a lone wolf. 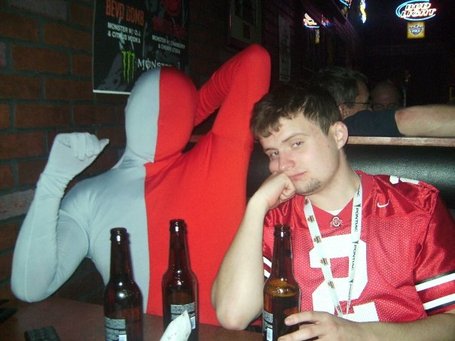 We left Ohio late Friday night and planned on getting to the hotel early Sunday morning (the game was on Monday). I had never travelled out west before, so it was quite the experience for me. As soon as we crossed the Indiana border, one of my friends jokingly said "are we almost there?" I think this was when we realized exactly how long this was going to take. In addition to my two friends that I would be sitting with at the game, another one of our friends came along as well. He attended Miami University at the time, and had a close friend who lived in Phoenix. He had a ticket to the game, but was sitting with his friend rather than with us. Regardless, it was good to have a fourth person to go along. It made the driving a lot easier. Because we were taking my car, I figured I would drive the first leg. I drove to St. Louis before we switched drivers. It wasn't that bad of a drive at all. We then switched drivers every 6 hours or so, while stopping at random gas stations to get food, gas, etc. I remember we were planning on stopping at a rest area while I was driving. Well, I wasn't expecting to see a rest area on the left side of the highway. It totally blew my mind. This probably shows that I rarely travel too far out of Ohio.

After approximately 30 hours of driving, we finally arrived at the hotel in Phoenix. We unpacked our things and immediately headed to In-N-Out Burger. We had all heard tremendous things, so we figured we had to try it. It did not disappoint. In fact, we went there three times in just over two days. We met up with some other Buckeye fans on Sunday night, and it was great to see some Ohio faces. 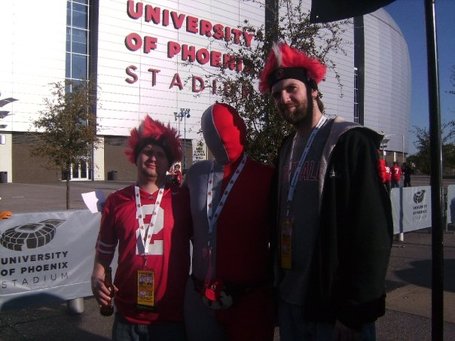 The atmosphere around the stadium was just crazy. The instant we stepped out of the taxi, people began to stare at the guy wearing a full-body spandex suit. I was expecting it, and we thought it was funny. I can only imagine the scene if my friends would have been able to get their outfits too. We met up with some other OSU fans, and went around the stadium taking pictures with anyone who wanted them (which was a lot of people). It was difficult for me because I couldn't really see anything through the spandex, I really had no idea which direction I needed to look for the camera. The best picture from the entire day was taken in front of the stadium with some random female OSU fan. I didn't see the picture until a few days after the game, but apparently some little Texas fan snuck into the picture. I had absolutely no idea she was even there but the picture turned out really well.

About two hours before the game, the "sports guy" for Fox News Phoenix approached our group and asked us to be interviewed for the news. At first we thought it would just be on locally, but apparently it was on throughout much of the country. They were interviewing Texas fans first, then they came over to interview the group of OSU fans. The Texas fans were pretty lame. They had this whole routine planned out, and it wasn't funny or entertaining at all. Our group just danced around like idiots, but it was at least entertaining. The interview didn't air in Ohio, but a lot of other places got to see it. The news guy told me he would mail me a DVD copy of the interview, but he didn't keep his word. I am still bitter about that. 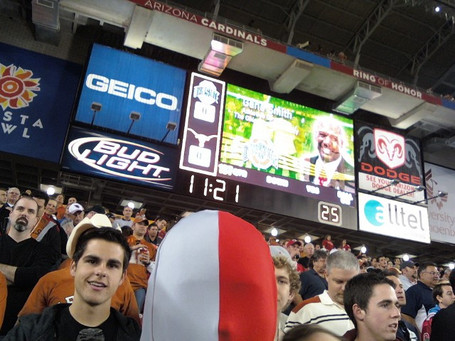 As for the game itself: It would have been a much more pleasant 30+ hour drive back to Ohio if we had been able to pull out the win....but it was a great game nonetheless. Texas seems to have a great fanbase, so I have to give them credit for that. We walked to some random restaurant after the game where we had some food and "Fiesta Bombs." People continued to stare and ask for pictures while we were eating. This kind of bothered me because I wasn't really in the mood for it after a heartbreaking loss. We headed back to Ohio the next morning. It was a very long and epic journey.

-   Oklahoma has the nicest rest areas in the country. They put Ohio's to shame.

-  Outside of Albuquerque, there is literally nothing in New Mexico...EXCEPT for a mechanical dinosaur farm. We actually tried to go to this place, but must have hit the wrong exit. We ended up on some deserted road that was basically in the middle of nowhere. It looked like a scene from "The Texas Chainsaw Massacre" or something like that. We got out of there in a hurry, but I am still intrigued by the mechanical dinosaur farm.

-  In-N-Out Burger is everything it's hyped up to be.

-  Texas fans were really, really upset with Michael Crabtree after the loss to Texas Tech in 2008. It is a very touchy subject for them.