Share All sharing options for: THE CFB BUYERS' GUIDE: MASCOTS

Over the course of our partnership with Consumers Union, we've given you in-depth ratings on everything from teams to coaches to individual players, but really, those are only part of the college football experience. And while some people treat mascots as an afterthought, a good mascot can really "make" your team on the national stage -- while a bad one can make you the butt of jokes no matter how many games you win. We brought a group of prominent mascots into CU's labs and put them through our usual rigorous testing, and after hours of in-depth analysis (and still more hours of picking brightly colored fuzz out of our equipment), we assembled the following results. 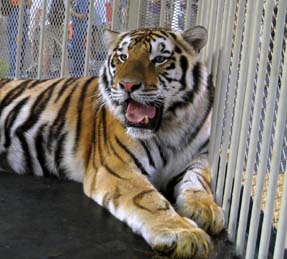 MIKE THE TIGER (LSU) | ■ ■ ■ ■ ■
Highs: He's, like, a fricking tiger.
Lows: High energy consumption, you're never quite confident he isn't sizing you up as a meal.
That a live hybrid Bengali-Siberian tiger is a bad-ass animal to have on one's sideline is so obvious as to be almost irrelevant to the discussion. I mean, you bring that into any stadium in the country and you've automatically trumped your opponent. But what raises Mike from the level of mere bad-ass mascot to transcendence is how utterly perfect a symbol he is for both LSU's program and its fan base. Mike is of a species that, in its natural habitat, would view the 92,400 denizens of Tiger Stadium as a food source; therefore, every purple-and-gold-clad LSU fan in his vicinity is putting his or her life in just a tiny bit of jeopardy by being there. And yet they don't care. Just like Les Miles does with his playcalling -- and like most LSU fans do with their staggering alcohol consumption -- they look gruesome death square in the eye, shrug, and go on about their business. There's art in that kind of recklessness, and while Mike's prohibitive food consumption and need for a wide-open habitat make him unsuitable for all but the wealthiest (and gutsiest) programs, those who can afford to put a Mike in their stadium will always earn the respect, if not outright fear, of their competitors. 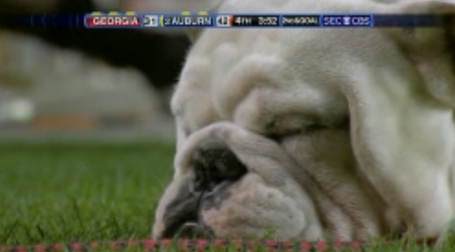 UGA VIII (GEORGIA) | ■ ■ ■ ■ ½Highs: Expansive stage presence that belies his size, off-the-charts adorableness.Lows: Minimal sideline activity (except in the case of Auburn receivers scoring touchdowns); tendency to overheat.Some mascots garner attention for what they do -- running around, dancing, cockpunching other mascots. Georgia's line of English bulldogs has long garnered attention for what they don't do, i.e. much of anything. Yet in a way that relative lack of action speaks to its own subtle form of badassedness, for if you can hold upwards of 90,000 people in thrall -- opposing fans as well as red-and-black homers -- while doing nothing but lounging on a bag of ice, then you definitely have what the French call that certain I don't know what. Of course, whatever it is, it doesn't come cheap; this breed has a well-documented history of respiratory and other health problems. I have an uncle who's a veterinarian in Virginia, and he says the generally accepted rule in vet circles is that anytime someone comes in your clinic with an English bulldog, you've got the green light to start shopping for boats. Those who have the resources to feed and maintain an Uga, though, will bestow upon their program a mix of bold confidence and AWWW WOOKIT THE WIDDLE BABY cuteness that few other sideline creatures can match. 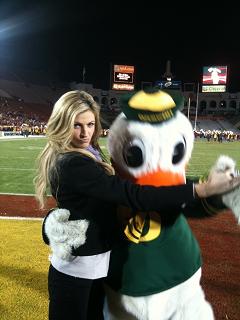 THE DUCK (OREGON) | ■ ■ ■ ■ □Highs: Both a lover and a fighter, yet always kid-friendly.Lows: They do know he's not wearing pants, right?To the best of our knowledge, no college mascot has ever EGOTted, but if one ever does, we'd bet money it'd be Puddles the Oregon Duck. He dances, he crowd-surfs, he has an extensive wardrobe of outfits for every occasion, he is a stone-cold pimp (as evidenced above), he'll even go all Joe-Pesci-in-"GoodFellas" on your opponent's mascot if the circumstances call for it. Some might call that attention-whoring, of course, and like the Disney character on which he's based, there's always the nagging question of why his standard getup doesn't include any pants. (Our research indicates the Duck is the first completely pantsless mascot since the brief, and ill-advised, experiment of Mssachusetts' Milton Academy with the Fightin' Ted Kennedys in the early 1980s.) There's no denying the Duck gets attention, though. For talented but remotely located programs looking for that one last edge to put them front and center in the nation's consciousness, Puddles might be just the ticket. 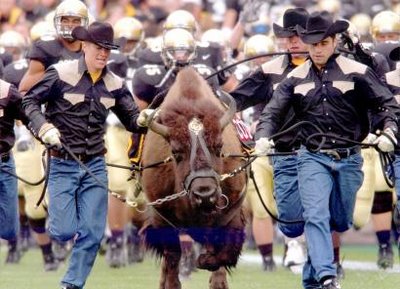 Highs: A potent mix of speed and brute force.Lows: Cumbersome handling, a tight fit in your garage.Rule #1 of mascotry: All other things being equal, Live Animal beats Cuddly Plush Representation ninety-nine times out of 100. So kudos to long-suffering Colorado fans for continuing to tear up their turf with a 500-pound buffalo before every single game. The same safety considerations apply here as they do with any live-animal mascot; entrusting one to the care of an inexperienced handler is the same as handing the keys to your Porsche 911GT3 over to your 15-year-old son who's only got a learner's permit (and it should be said that Ralphie, while quick, doesn't have anywhere near the Porsche's handling.) As far as ways to intimidate your opponent, though, "imminent trampling" does rank pretty high on the list of fears you could strike into their hearts. 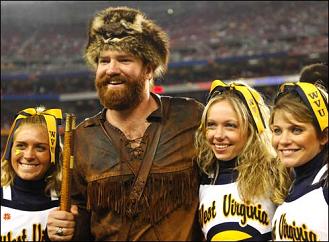 MOUNTAINEER (WEST VIRGINIA) | ■ ■ ■ □ □Highs: Excellent survival skills, and perhaps the best-armed mascot here.Lows: Not much in the way of book-larnin', and no longer a hot chick.The Mountaineer, like Mike the Tiger, scores points for being a pitch-perfect representation of its fan base -- grizzled, tough, and probably not all that concerned with the mores of society that discourage us from openly brandishing firearms in public or setting couches ablaze. As human mascots go, he's pretty cool. All that said, we have to confess to a small measure of disappointment with the Mountaineer's current iteration. WVU went outside the box with their previous Mountaineer, a young lady who could not only handle a musket but was kind of cute to boot. A grizzled Will Ferrell-looking dude may match our preconceived notions of what a mountain man should look like, but he doesn't exactly take the mascotting arts in a new direction. We hope West Virginia will see fit to bestow the mascot title upon more hot women in the future -- and a hot Asian woman would break even more boundaries for the program. Just planting seeds here, people. 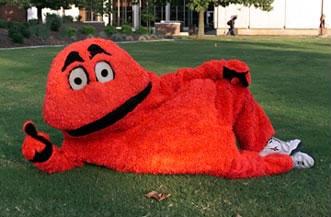 BIG RED (WESTERN KENTUCKY) | ■ ■ □ □ □Highs: Cuddly to his friends, confounding to his enemies.Lows: Questionable origin leaves him wide-open to charges of immigration violations -- or worse.Picking a mascot can be a tough business. You want to try to avoid punting and going with the generic Tiger, Bulldog or Bear that numerous other college programs have, but not every school is fortunate enough to have a Longhorn, Buffalo or Gator that succinctly and uniquely represents their geographic location and/or specific culture. So some upstarts go for a third option, which is to Just Make Some Shit Up, and that's how Western Kentucky ended up with the amorphous, Muppet-llike "Hilltopper" you see above. It's a risky, swing-for-the-fences option, and we're not convinced it's the right one to take in every situation. Some kids will no doubt associate Big Red with "Sesame Street" and find him adorable, though there are probably an equal number of kids who are utterly terrified of him. Unlike Oregon's Duck or Georgia's Bulldog, he can be kind of hit-or-miss with the ladies as well. And until some credible information is provided on what exactly the Hilltopper is and where he comes from, he may be a bit of a marked man in an environment of dramatically heightened concerns over immigration. (It's not a coincidence that WKU's football team has never played in the state of Arizona.) No doubt, when someone asks "What should our mascot be?" it takes some measure of courage to answer "blob," but you better know what you're getting into. 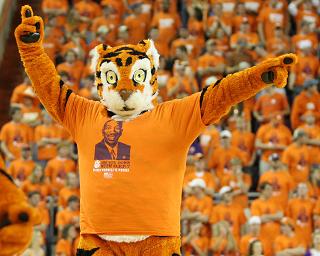 CRACKY THE TIGER (CLEMSON) | ■ □ □ □ □Highs: Boundless energy, freakishly acute eyesight can count the stripes on a zebra at 100 paces.Lows: Erratic behavior, strained relationships, auditory hallucinations.As we mentioned above, going with a commonplace mascot like the tiger implies a play-it-safe mentality on the part of your administration, so if you're going to go that route, you have to find a way to make it your own. LSU, of course, accomplished that expertly by putting a live tiger, and a gigantic one at that, on its sideline. Clemson, on the other hand, didn't appear to have quite that level of fearlessness, yet in their own way they managed to make an even riskier choice: pulling a wide-eyed, unstable, possibly still drug-addicted tiger out of a halfway house and charging him with mascot duty. Certain duties of a mascot, of course, are perfectly suited to Cracky's amped-up and frequently erratic skill set -- running around on the sidelines, jumping around to motivate the crowd, joining the students in the vibrant drug culture that underpins nearly every large public university -- but mascotting also entails close contact with fresh-faced (and often scantily-clad) young women, not to mention vulnerable young kids. LSU, for their part, at least puts their tiger in a rather formidable cage, but by all accounts Clemson's tiger is free to roam the sidelines and stands with impunity, asking spectators for money and telling impressionable young kids about the one Clemson-USC game where he blew rails in the locker room and tried to tackle a giant robotic unicorn he saw trying to eat Howard's Rock, only to find out it was a security guard. That's the kind of trouble you don't need, and though we never thought we'd say it, you might actually be better off with a real, man-eating tiger. 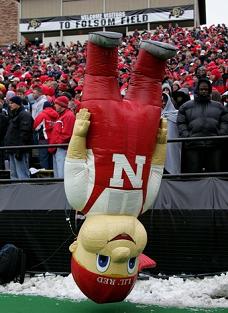 LIL RED (NEBRASKA) | XWe've long advised institutions not to go the inflatable route, mainly because such mascots rarely look as "intimdating" as they do "freakish" or merely "goofy." That certainly applies to Nebraska's Lil Red, whose resemblance to a 1940s cartoon character in no way conveys the skull-cracking swagger of the Cornhusker program. But as you can see from the photo above, Lil Red is not just low on machismo, he's an out-and-out safety hazard. His extreme rollover risk compels us to deem him "unsafe at any speed" and give him our Not Acceptable rating; if you must go with a Nebraska product, stick with Herbie Husker until NU fully addresses this model's dramatic safety issues.