Closure is a lie and will always be. You can move on, but the past never really dies, and instead shimmers in and out of phase. It is quantum: sometimes it is here, and sometimes it isn't, and when it decides to appear or not is a matter of considerable chance.

There are some times when it appears with some regularity, though .This weekend is usually one of them. 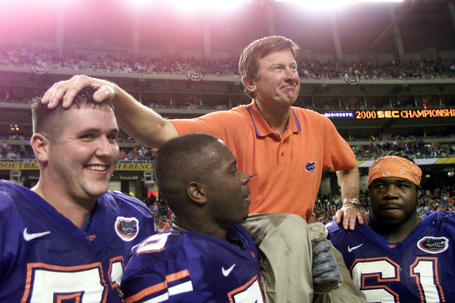 Spurrier was the coach for the 1994 team that died a horrific late death by Frank Sanders to Auburn in the game we regard as the focal event of the fixation resulting in the words you are reading right now. He coached the 1995 team that rained sixty-two points of brimstone on Peyton Manning in the Swamp. He won Florida's first national title in 1996 only after losing it to Florida State a month earlier; he scraped together two quarterbacks, Fred Taylor, and a five foot nothing wide receiver into ruining Florida State's national title aspirations the next year in a game we finished off by leaping into the arms of a huge drunk man we did not know next to us. It is still one of the purest moments of exultant, riotous joy we have known.

Spurrier really did, in fact, teach us how to love a woman and scold a child. He taught us that the only honest way to play a game is to attempt to win no matter how much time is on the clock. He cultivated in us a low tolerance for any bullshit other than our own. He taught us that honesty should cut both ways. He taught us that sometimes you really should turn down the opportunity to wear team-themed gear, since it is not always fetching or stylish. He taught the beauty of the indefensible fade thrown in the gap between the corner and the safety in a Cover 2.

So: it's hard. It's always hard to see the man whose football team literally altered the course of our life on the other sideline. If South Carolina defies history and keeps it close in the Swamp--and they very well could win, thus securing their first SEC East title and a spot in the SEC Championship--there won't be much sorrow for us. On the other hand, if Florida starts to drop daisy-cutters on the Gamecocks or vice-versa, we hope the winning team hits the afterburners and don't stop until the last second ticks off the clock. For the man who screamed at the Cornhuskers to stop taking knees and run plays at the end of his worst loss in the 1996 Fiesta Bowl, it would be dishonest to do anything else, and a disservice to the blitzkrieg football he practiced and preached at Florida.

Therefore: fire when ready, and don't stop until the magazine's empty. It's the least the man is owed in defeat or victory, and true to form, he'd probably be the first one to say it if you asked him.