THE WEATHER MACHINE IS OPERATIONAL. 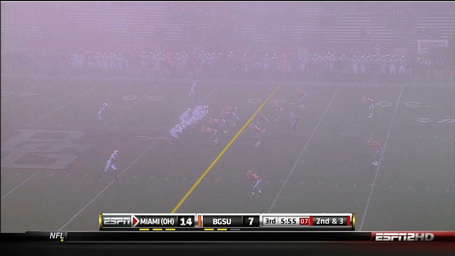 The machinations of Dr. Steinbrecher and his weather machines cranked up in the second half of last night's Miami/Bowling Green game, obscuring the play in a fog that had wide receivers doinking balls off their shoulder pads and ESPN camera crews abandoning the sideline cam entirely in favor of boom shots. This still (via @bubbaprog, of course) is actually one of the clearer shots from the second half of FOOTBALL ON THE DARK AND FOREBODING MOORS NIGHT. This game was decided by a successful Miami field goal. When and if you coach a team and you sign a half-bat/half-man as your field goal kicker people might laugh, but when they kick a game-winning field goal using echolocation, you'll be the one laughing, you genius.

NEWTONIAN PHYSICS OF THE DAY. Mississippi State issued a statement yesterday clarifying their timeline in divulging their claims in the Cam Newton case, a timeline further clarified here by Tony Barnhart, who also says that conspiracies are crap though in more polite terms than that. (Keep in mind, conspiracies require competence, the scarcest commodity in the world.)

Michael Rosenberg, better known to the world as the man who would connect Somali food supply instability to Rich Rodriguez's improper and excessive use of athletic tape on Michigan's shoulder pads, takes the ice to the tune of Nickelbacks "Hurrg Gurngle Fartbuckle Urngh" 'and executes a perfect triple Salchow of stupidity.

What I find remarkable is that, if all of this is true, the under-the-table payments are what would upset people the most. I mean, yes, it is against NCAA rules. But in any other segment of society, if a college kid found a way to use his talents to bring in money to support his father's church, he would be a hero. There would be glowing newspaper profiles and probably a few humanitarian awards. If a kid does it in college football, he's a villain.

Christopher Hitchens just ripped out his IV of chemo and Johnnie Walker Black reading that, but he probably does that three or four times a day (to change it out) (because he requires more whiskey, not more chemo.)

BUT HEY, LET'S REMEMBER: The NCAA's rules prohibit Cammy Cam Juice from being sold for the benefit of either charity or profit. This is a shame, since a small sliver of the proceeds would necessarily go to Florida because it's just Gatorade mixed to the consistency of a fine, sugary sludge. Oh, and FWIW Lane Kiffin says money never came into the equation when he was talking with the Newtons, but Ed Orgeron likes to negotiate all his transactions in pelts and piles of flatmeats anyway, so it's really not as straightforward a statement as one might think.

ATTA DUDE. Speaking of Kiffin, his presence would have deterred the biggest signing of the Dooley era yet.

A DAUNTING SLATE. WE GO SO HARD AT FLORIDA.

Florida has added Florida Atlantic, Alabama-Birmingham and Furman to its 2011 schedule.

Only the promise of Schnelly pacing the sidelines at Florida resplendent in his a white suit takes a shred of the shamesting off this shitpile of an out-of-conference schedule. The article then cites the four game stretch of Alabama, LSU, Georgia, and Auburn in a row, but it's not like a.) this isn't the SEC, and this happens every year and b.) Alabama will have Houston Nutt for a coach with Saban leaving for the Cowboys and Auburn's game won't count anyway.

BUTCH DAVIS THANKS EVERYONE, BUT MOST ESPECIALLY YOU, AUBURN. Just over here quietly riding out what is now the second biggest scandal of the year, ho-hum, eight wins in the ACC a-comin'.

TIMELY AND RELEVANT. Doug Marrone's variety of wacky has a border, and citing Caddyshack is right at it. In other news, Doug Marrone enjoyed basic cable in the 1980s, and will follow this up with a Cloak and Dagger reference just to prove it.

DALLAS RERUNS A-PLENTY AR ON THE HORIZON. One of our treasured mid-day distractions may be back, as reruns of Dallas surely have to be on the market for the Longhorn Network. Failing the rights to this, Texas should be able to nail down the contract to secure Matt Houston for $369 or so.

VIVA MISSISSIPPI. Ain't havin' no pink cleats on my field, son. It's one thing to celebrate cancer if it hits the right people, but even talkin' about breast cancer ain't family friendly, son. Now if you wanna talk about the "best" cancer, well, that's a topic I'll tackle. I say it's pancreatic, but that's just me.