PUTTING THE "SHIM" iN HEISMAN 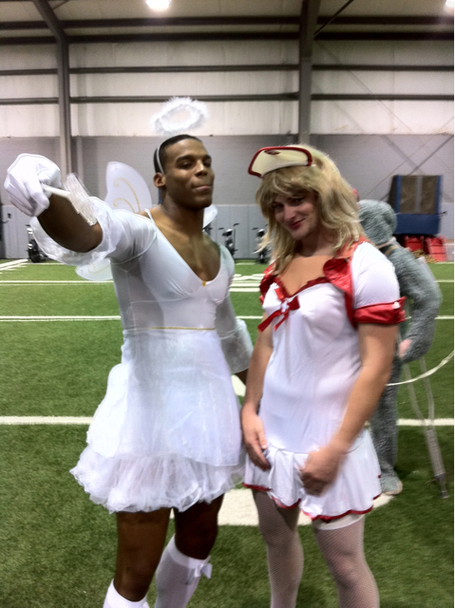 Fairy ZAP! You've been sexed by Camette Newton, the zone read fairy. The Auburn Halloween Party featured a cornucopia of visual horrors--HELLO LIEUTENANT DANGLING CHOP BLOCK--but this redeems them all. The come-hither glance; the swooping cleavage; the naughty gloves; the dainty lace. It's a triumph of SEC cross-dressing unseen since the heyday of Darren McFadden, and will surely pass under the discerning but forgiving eyes of Alabama fans without comment.

(Please Auburn fans: create a massive display like this with the Fairy Sodfather flying down the field and blowing up a midget Saban. Do it, and live in the annals of epic fandom forever.)

OH LET'S GET UPSET ABOUT BCS STANDINGS YAY. The BCS standings have Auburn and Oregon as number one and number two, upsetting only football hipsters terrified about the fall of Boise in the rankings. Ask yourself this: does Boise stay "alt" if it goes in the lamestream, Boise fans? Did you already "sell out" by appearing in two BCS bowls? By whoring yourself out to any team that will play you, are you in fact riding the football slutwave? Do you want to "bang hot chicks" by appearing in a title game, and ensuring your peen gets ridden by lamestream writers other than Pat Forde and Stewart Mandel? Was Grantland Rice the first football alt? 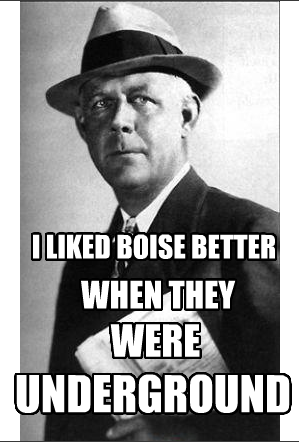 Hinton reminds you that amidst this football hipsterism, the dark possibilities all remain, including--hahahahaha--Les Miles, BCS Title participant. You do not want Oregon to lose. If they do, then that's how you end up watching your horse get eaten by BCS zombies on Marietta Street while you cuddle in a tank with your new best friend, a zombie you have just debrained with his sidearm. (Walking Dead was especially funny to us because of the large number of buildings in ATL requiring no CGI or alteration to look already pre-zombie apocalypsed.)

YOU HAVE REDUCED LANE KIFFIN TO BEING IMPRESSED WITH A 21 POINT LOSS. The one underreported facet of the Oregon Duck offense is their superb conditioning, which is probably closer to Rugby Sevens players than your standard football player.* Lane Kiffin is left in awe. This is not difficult, since pneumatic tube delivery systems at banks and the concept of object permanence do the same thing, but it's still noteworthy.

Even after giving up 24 unanswered points to finish the game, Kiffin actually complimented his team’s stamina. "I think our two weeks of conditioning paid off," he said. "It sounds weird because we got blown out."

*Closer, but still not close. Professional football players would prolapse lungs trying to keep up with Sevens players.

A DISPLAY OF DOMINANCE UNSEEN SINCE THE LAST TIME WE PLAYED GEORGIA. With our overwhelming and effortless win over Georgia in Jacksonville, all is put right with the world again, and there's no problems and everything is marvelous. All Florida had to do was;

Other than that? NEVER A DOUBT. Doug has the expected Charlie Brown metaphors and more, Kyle got the bullet points out of his system quickly, and here's a picture of a sign that makes as much sense as the entire game did.
YOU COULD BE MICHIGAN STATE. Of all the anvils dropped this weekend, the heaviest and pointiest came down on the end of Michigan State. We're in awe of someone even being able to get words down after that, but perhaps there's catharsis in noting just how much ass got left shredded on the field against Iowa this weekend. Michigan State claims the Houston Nutt/Jevan Snead 2009 mantle of highly ranked team destroyed in heinous and public fashion.
YOU COULD BE CLEMSON. It's possible not only to lose to Boston College, but to also lose your starting running back for at least two weeks in the process.
YOU COULD BE MICHIGAN. There's a consensus, and there's no real case for it except for angry man fist rage at losing to a Penn State team incapable of scoring on your mother. (And that is a low standard.) (Your mother.) (WE SAID YOUR MOTHER AND IMPLIED SHE HAS LOOSE MORALS.) (Because she does.)
JACORY HARRIS, CONCUSSION AWARD WINNER. In addition to whatever other injuries he racked up prior to this week, Jacory Harris' long slide into injured messhood continued with a concussion on Saturday (the result of this horrible hit)  and he may miss the game against Maryland. This would be an issue if Maryland hadn't splurged and used all of its points this Saturday allotted to them under Maryland law, so a 3-0 win with a true freshman quarterback shouldn't be a problem.
ADDITIONAL EXCELLENCE FROM OUR COMMUNITY: The Community Access Channel of EDSBSTV brings you Bubbaprog live from the Cocktail Party--hint: memory loss!--some outstanding visuals from Jack Fact, and ACS' fine Kafka imitation. You people are ekeing us ever closer to going full Chan, and that is a fine thing indeed. (Tulsa, seriously, it's almost rude at this point to celebrate it.)