Welcome to Aggro-Tourism, EDSBS's roaming safari tour of all those foreign cultures that spring up on fall Saturdays, right here in America. Now playing: The Stanford Cardinal. 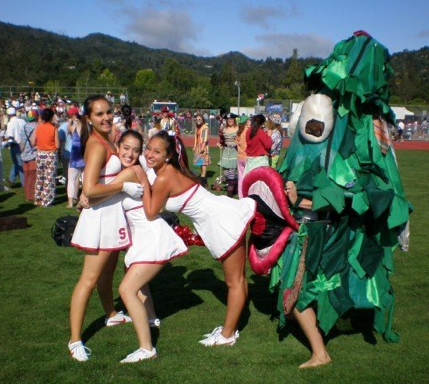 Stanford is a bit of an odd duck. They've got beautiful park space surrounded by eucalyptus trees in which to tailgate, but the under-40 crowd is all about hard alcohol and obsessive consumption thereof. They've got an over-40 crowd known for their wine and cheese parties that will still drop everything to watch the most "ah, fuck it" marching band in the nation give an impromptu concert, or chortle at the mascot dry-humping a mother pushing a stroller. They didn't appreciate football for the longest time, and now that they've got a reason to do so, perfectly sensible acquaintances of ours are doing things like passing out in the on-campus post office. (His defense: "It's 24/7 and heated!")

Our buddies at Rule of Tree look back at the transition:

Based on some of the spreads you'll see, especially where the dedicated older alumni have staked out spots, you might forget you're at a football game. (In the years before Jim Harbaugh arrived, it was easy to forget even after you were inside the stadium.)

During the lean years, it was customary for students to tailgate throughout the first half and then, once adequately hydrated, wander into the stadium for free. That's changed somewhat since the renovation of the stadium in 2006, the improvement of the team, and the introduction of a student section.

A cool thing about Stanford is that the undergrad population is just 6,500, so we really do know (and will party with, after games) the athletes. It's not like other schools I've been to where athletes hang out with athletes only and live in athlete-specific dorms and the rest of us can go f ourselves. Similarly, most parties are open to everyone -- you don't have to be invited to the specific frat or Greek or whatever to get in, so the more the merrier.

I think this'll come as a surprise to some, but Stanford is VERY anti-authoritarian, very anti-stuffy rules, and instead is all about meritocracy, and if you have a good idea for the next billion dollar company, I don't care what your title is or if you're wearing jeans and a tee shirt, let's hear it. And really, isn't that what AMERICA is about?

As far as gear and accoutrements, our correspondents recommend leaving ties, sundresses, and popped collars at home in favor of t-shirts and flip-flops, and stocking up on Napa red wine and Anchor Steam. And if you run low on supplies or friends, keep an eye out for the adorably-named Toby the Van.

Directions to gameday, via correspondent Dan: 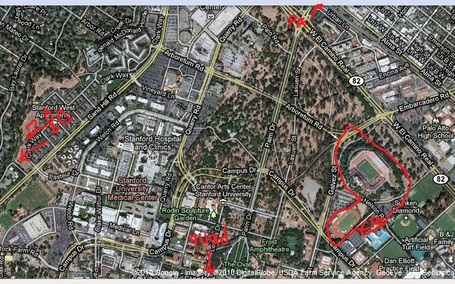 Come in on Caltrain, which drops you off right between downtown PA and campus, or if you're driving, take 280 and get off at Sand Hill or Alpine, and come up the back (SW) side of campus and park just about anywhere, parking's easy on the weekends. Don't take 101 and come in the frontside (NE). Tailgating is in the red area I circled around the stadium itself for the Joe Six Packs with a grill and some beers (and most of the visiting fans), on the track for family-friendly activities, and in CTG, Chuck Taylor Grove, for the people who've had tickets in the family since Elway and Plunkett were in diapers, are now venture capitalist millionaires and do in fact bring the wine and cheese and five-star gourmet dining you'd expect. Students mostly tailgate in the dorms and in frats.

Saturday grub and good drink selection: The Oasis, the Dutch Goose, and the Old Pro, which offers 4-foot cylinders of beer.

Nuts you can throw on the ground: Antonio's Nut House

It seems nearly obligatory in any roundup from the Farm to re-tell the story of the Tree getting fired for performing drunk. This lovely young lady blew a .15! (This is basketball, yes, and we don't care because we love this.)

The student wearing the costume of the legendary mascot was suspended from duty after UC Berkeley police observed her drinking from a flask during a Stanford-Cal basketball game last week, officials said today.

"She was taking drinks inside the tree," said Kevin Klintworth, assistant athletic director at Cal. "The officers could see the flask through the costume."

From the tree herself, though: All in the game.

"I'm so f*cking burnt out," Lashnits said. "I have shin splints that are killing me and my costume got torn up and destroyed against Washington when Sixth Man stormed the court. The only things I'm missing are two home basketball games which really aren't that big of a deal to me. I'm not that big of a sports fan."

We also heard from an actual former Notre Dame Leprechaun, who gravely informed us that the Tree is "widely aknowledged as the absolute biggest dick in the entire mascot community." Stanford, we salute you.


EDSBS thanks intrepid corespondents Scott Allen at Rule of Tree, the Toby the Van crew, DevilGrad, and several anonymous patrons for their stories and guidebooking this week.