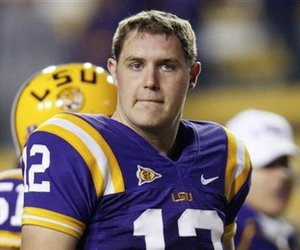 This post is dedicated to Jarrett Lee, who like your dad gives everybody on the block six the wrong way.

SYRACUSE at SOUTH FLORIDA: PLEASE RETWEET this to as MANY FOLLOWERS AS YOU CAN in the next thirty minutes or THE BIG EAST WILL GET AN AUTOMATIC BCS BID! #LOL #theywill

ILLINOIS at PENN STATE. "What's he called?" "Ron Zook, Joe." "That's funny. Back in my day we called 'em mongoloid, but I understand that's not polite these days."

TENNESSEE at GEORGIA. Because of God, Richt worried about nothing/ This explains the pass blocking/ Dooley the Younger in compare / Short on resume, long on hair.

PITTSBURGH at NOTRE DAME. He is so close. He turns the pages of 58 Yard Field Goal and Camaro Owner magazine. "Yes! The meaningless FG in a blowout!" Wannstedt comes.

MICHIGAN STATE at MICHIGAN. FACT: Denard Robinson is not black, but is instead permanently and completely bruised from deceleration from speeds that kill normal humans.

ARKANSAS at TEXAS A&M. In a past life, Jerrod Johnson worked in a space program: the Soviet one. He was in charge of the dog program. He lost track of those, too.

UCLA at CAL. They waited. Neuheisel flipped a coin. "Okay, call it!" The recruit yelled. "Heads!" The coin lands. "Heads it is! We play this one drunk!"

OREGON at WASHINGTON STATE. Paul Wulff's best career option now: hire Ryan Leaf as his body double, pay him $15 a day to coach, and fuck off to Mexico until he's fired.

AUBURN at KENTUCKY. Deadspin exclusive! Gene Chizik sent shot of his penis to rival coaches! [clicks jump] [PIC OF CAM NEWTON TRUCKING THE SHIT OUT OF SOMEONE.]

OREGON STATE at ARIZONA. One should do better/ to earn cheddar/than fritter away Jacquizz/With his brother/ it shouldn't be a bother/ punching a Stoops in the snizz.

LSU at FLORIDA. Urban finished the inception. The kick woke him. Miles mind was terrifying. "What was down there?" "It's apes. Apes as far as you can see."

USC at STANFORD. 72-32 shone on the scoreboard. Harbaugh was ready.  He struck first: "What's YOUR deal?" Kiffin derped: "I'm not good at coaching football."