KNOW YOUR MEME: MARTINEZ DO EVERYTHING. 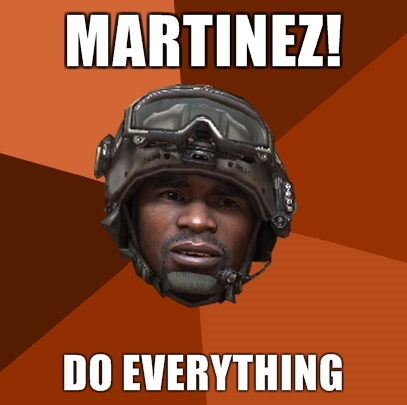 Talk to your co-workers who don't follow college football this morning, and it will go something like this.

Them: "Hey, you know who might win the Heisman?"

You: "I bet you're going to say Taylor Martinez, who rushed for 241 yards and threw for 128 last night against a shithouse Kansas State team."

You: "Kansas State has the collective defensive team speed of a Best Buy Geek Squad staff."

Them: "You're such a hater! TMI! Things people say when they're not actually communicating but just regurgitating bits of meaning other people use because they're out of things to say?"

You: [SETS CO-WORKER ON FIRE AND BEAMS WITH JOY]

Yes, Taylor Martinez is really, really good, and unlike Denard Robinson actually has someone to hand the ball off to when he runs the zone read in Roy Helu. (Rece Davis' "Helu, Goodbye" call was a low last night. Let's pretend this never happened, sir.) Repeat: Taylor Martinez is terrifying. YOUR MAGNITUDE IS GRANTED IN THIS RESPECT, NEBRASKA. BE SOOTHED. Temper it with some assy play by Kansas State and the Wildcats' ability to defend anything Nebraska wanted to do, however, since the line was easily able to bust car-sized holes in the K-State defense and Carson Coffman is...well, Carson Coffman is to Taylor Martinez what Brett Favre's penis is to Greg Oden's. It's not even worth the comparison, and we all just feel more uncomfortable now for having made it.*

*Topical humor! Carson Coffman throwing a Hail Mary was one of the sadder things we've seen last night, since the instant he threw it you knew it wasn't even getting close to the endzone, and would surely be intercepted.

SURPRISE HE'S TERRIBLE NO MATTER WHERE HE IS. We've always been of the mind that unless you're running one of those playbook-free offenses, you're better served as an offensive coordinator if you sit in the booth so you can see the full spread of the defense without the hustle and confusion of the sideline. The exceptions to this are guys so brilliant they can actually parse out what's going on in real time on the field (i.e. Mike Leach) and guys like Paul Johnson who need to know who's blocking whom on option plays. There is a third category: horrible offensive coordinators, who just suck no matter where you put them. Both Steve Addazio and Gary Crowton could be on the sidelines on Saturday. (LSU fans hate theirs more than we dislike ours. Here's proof.)

WILL HILL DO SOMETHING. Teryl Austin says he's not living up to his potential, which is extremely accurate. John Brantley couldn't throw this week due to injuries sustained in the Alabama game, but he'll be fine for Saturday's game. In other news, we're going to drink ourself blind tonight, but then attempt a ropes course without a safety harness on Saturday morning. It'll be fine.

On what he learned from the 31-6 loss to No. 1 Alabama: "It showed us that these Crimson Tides are not gods. They’re people. To me, it wasn’t deflating. It was just, rest assured we can beat these guys. Look what we just did to the No. 1 team in the nation. We just drove the ball 85 yards. That just gave me more confidence."

Carl Johnson was once stabbed in the gut and saw it not as a horrible thing, but instead as a testament to his outstanding core strength. Carl Johnson also sees Urban Meyer as Jesus' firstborn. Carl Johnson is high ALL THE TIME WITHOUT DRUGS.

MMMMM DAIRY QUEEN. Chip Kelly gets free Dairy Queen after he extols the virtues of the brand on air. If the people from a quality polish vodka company are reading, hey, we really like your product. Whatever it is. It's delicious. Seriously, the best.

THIS ALSO MEANS MARK MAY CANNOT OPENLY CAMPAIGN FOR LYNDON LAROUCHE. ESPN is clamping down on political endorsements by its employees after Lou Holtz's emails for the RNC. If you think this will stop Beano Cook from passionately sandwich-boarding for Nelson Rockefeller, you're sorely mistaken, buster.

WHEN HE GNAWS IT OFF BEFORE GAMETIME DON'T BE SURPRISED. Ed Orgeron is fighing a staph infection in his leg, and may not make the Trojans' matchup against Stanford, their first game as double-digit underdogs since 1998. Orgeron is in the hospital, which is bad in a completely different way than when he tried to steal hurricane refugee players from Tulane while bodies were being fished out of the Lower Ninth.*

*That's Holly, but we endorse this sentence.