BAKED BAYLOR BEARS GET THE SLEEPIES

Share All sharing options for: BAKED BAYLOR BEARS GET THE SLEEPIES

It's been an arduous season for the EDSBS Zoo Crew after a summer of nothing but conference realignment bitching and piddly Georgia DUIs. Florida is floundering. Tennessee is flailing. We've resorted to referring to ourselves as a "Zoo Crew." It's hard times like these that make us all the more grateful for the news stories that write themselves: 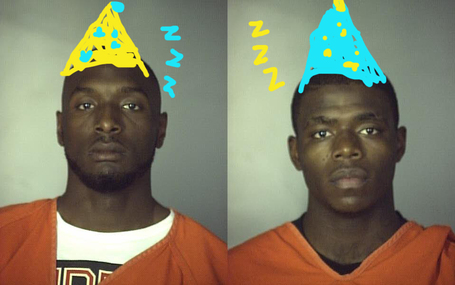 Those are sleeping caps. We're not artists.

Jefferson, a sophomore tight end, has one catch against Buffalo for 43 yards and a touchdown to his name this season. Gordon, a sophomore wide receiver, has 14 catches for 327 yards and four touchdowns, and recorded a season-high 161 yards against Kansas. But we know what you're thinking, and yes: This IS your invitation to flood the comment thread with MS Paint renderings of what you think this might have looked like. Are there blankies? Half-eaten bags of Halloween Double-Stufs? Teddy bears? You tell us.