Christopher Hitchens is a writer for Vanity Fair, outspoken atheist, and recently diagnosed cancer patient. He is also, unbeknownst to many, a passionate college football fan. 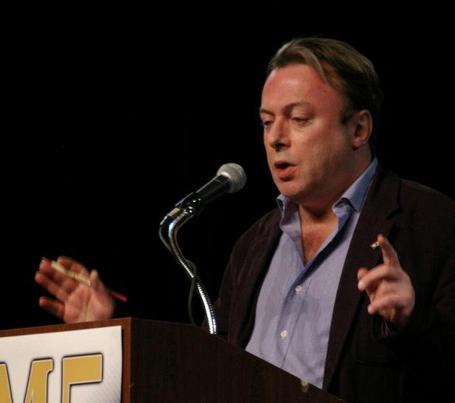 Since we have last spoken I have been diagnosed with a particularly invasive and nasty form of cancer. This seems as good an access point as one could hope to have to discuss the state of several football teams their pitiable performances thus far this season. Pray for them all you like, but the invisible tyrannies of your imagination will have less do with our collected outcomes as a butterfly's flatulence does with a typhoon, or as much as the tangled threads of our current policy discussions with the thugs and religious fanatics currently in charge of Palestinian peace talks have to do with actually solving the actual issue of their safety or happiness. This continuing farce is not dissimilar to Michigan's defensive woes. (Greg Robinson is to defense what Henry Kissinger was to dead Cambodian children.)

One particularly inoperable tumor may be found in Athens, Georgia in the form of Mark Richt. Richt styles himself a man of faith. The efforts of his football team on the field thus far validate this, as they show no concrete steps taken to alleviate the very real demons besetting them besides the wasteful pleading of limited breaths to an empty and indifferent aether. The Bulldogs miss tackles as if their hands are covered in hog grease, the offense display signs of a troubling palsy, and as a group they display all the cohesion of Greek parliamentary coalition. That they should qualify themselves as bowl-eligible would be a minor miracle indeed, though not one attributable to any imaginary phantom presiding over a perpetual Pyongyang-in-the-sky.

/puts in fresh Member's Only Jacket, too

Another more treatable disease may be found in the sadistic heart of America itself, Texas, the great cradle of boastful know-nothingism itself. The Longhorns are experiencing a crisis of faith unforeseen in their time. Mack Brown, the distinguished gentleman with a televangelist's touch and the blotchy flesh of a Welsh guttersweep, has lashed his fortunes to a particularly daft crony, Greg Davis. Brown's longtime playcaller had thus far conducted the offensive business of the Longhorns as well as a blacksmith conducts proctological examinations, sliding in crude implements in awkward fashion at heinously incorrect angles. The results have been as painful as the comparison might imagine without even the crude but sanitizing cauterizing offered by the application of Davis' overheated blunt instruments.

As the Chinese proverb says,"When a great man rises to power, even his dogs and cats become lords." In this case the feline wearing the offensive coordinator's headphones is meowing unintelligibly while his team flounders, and may have left quite the business in the litter box for his master to confront.

A final inoperable case--besides perhaps myself, something I greet with only the sorrow that experience grants, not a dreading of some perpetual dungeon in the stars I shall occupy for my lack of obeisance to a petty, bureaucratic deity--is the USC Trojans. Piloted by the dim walking tadpole spawn of the hideous bullfrog of nepotism, Lane Kiffin, the Trojans now find themselves under a new, unsteady tyranny in the form of AD Pat Haden. Their loss to Washington did not flatter. Previously the Huskies had suffered defeat at the hands of the theocrats from Provo, who in turn suffered a defeat at the hands of lowly Utah State.

Haden now sees himself in much the same situation that reformist Serbs encountered in postwar Serbia. Kiffin, like that despicable racialist Slobodan Milosevic, is the churlish heir to a tainted empire whose worth may have been dubious in its time and worse in retrospect. Without loyalties of any sort and a desire to resign the past to the dustbin of history with all due haste, Haden may indeed find himself willing to turn Kiffin loose to the vicissitudes of the unemployed, and perhaps even to the Football War Crimes Trial in Knoxville, whose open warrant for him will finally see the respect it deserves in a world ostensibly out to establish some benchmark for human behavior and common decency. This disease may be the most treatable, as it is desired by the patient and would likely result in a clean bill of health for the patient with little effect.