A FRANK DISCUSSION OF THE COCKTAIL PARTY

Share All sharing options for: A FRANK DISCUSSION OF THE COCKTAIL PARTY

Dolla Bill Doug joins us for a frank chat about the Cocktail Party. We both sort of hatelove our teams right now.

Doug: AHHHHIIITE LET'S DO THIS

Orson: You're going to win by two TDs That's how I"M BRINGING THIS

Doug: You're going to win by three, plus a safety, when we try to run the "WildDawg" and our center snaps it five yards over Carlton Thomas's head. (Carlton Thomas is short)

Doug You know how to convert third-and-long against our defense? Shine a laser pointer about ten yards deep in our defensive backfield. All our DBs will start chasing the dot, like cats.

Doug: That's how Kentucky did it, anyway.

Orson: This assumes the ball can get to the defensive backfield. If you play with eight linebackers this won't be a problem.

Doug: We actually do play with five linebackers. Unfortunately one of them is lined up at nose tackle.

Orson: That's cool. We have an animate stepladder, Carl Moore, and a giant marzipan sculpture starting at wideout.

Doug:  Hold on, I think I heard one of my dogs whining at the back door. It sounded like she said, "Why aren't you using the tight ends more, dipshit?"

Orson: Oh, and Deonte Thompson, the best wide receiver to ever play despite the condition of cockfingers affecting his every catch.

Doug: OK, I'm back. She actually said "fullbacks." Which means my Boston terrier has a greater grasp of our offensive personnel situation than Mike Bobo does. 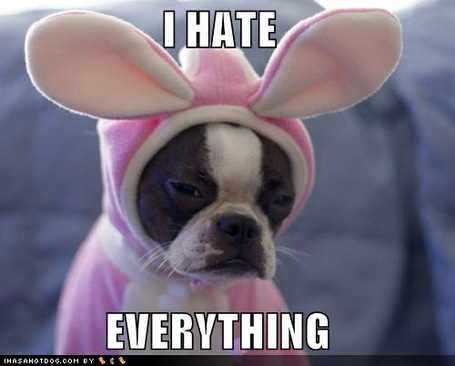 Orson: That's not a surprise.

Doug: See, here's the thing: Everyone is calling us the hottest team in the SEC East right now because we just laid waste to UT, Vandy, and Kentucky. That's like writing a letter of recommendation for someone's Harvard application because they beat Snooki from "Jersey Shore" at Scrabble one time.

Orson: The worst part is watching him school Addazio across the way in head-to-head DERPal combat. "Ill-advised screen at the goal line? I see you and raise you a hopeless vert route into triple coverage, young man!" <---IS A LIE BECAUSE WE DO NOT THROW THE BALL THAT FAR EVER OH GOD I HATE YOU STEVE ADDAZIO---

Doug: How big is your D-line? Do they average more than 250 pounds? Because if they do, Bobo will try to run Carlton Thomas up the middle at them, with Caleb King and Washaun Ealey watching from the bench.

Orson: How about running the same play, but with a one-footed water nymph? That's half of our offense.

Doug: I hate to knock Carlton this way, but seriously, you could fit five of him into a Smart car. Oh, and you want to know the secret to completely shutting down Aaron Murray? Dude has a thing for Asian chicks.

Orson: That's cool. Emmanuel Moody's close enough. He spends a lot of time on his back, so it should be case closed there. 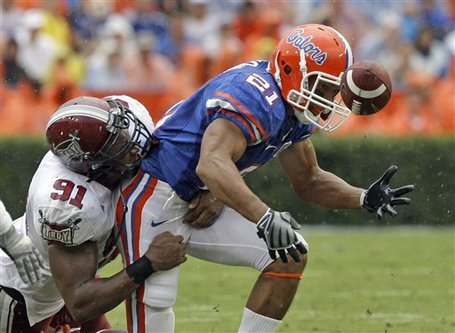 He'll also give it up without much effort, Aaron Murray. HAWT.

Doug: Seriously, that's why the game plan for him against South Cackalacky was so conservative. Apparently USCe has a weird preponderance of Asian chicks, and Murray couldn't keep his mind off them.

Orson: You know what the key to shutting John Brantley down is? SNAP THE BALL HAHAHAHAA. The worst part is that I don't even hate UGA that much. Why should I?

Doug: That's one of the saddest sentences I've ever read.

Orson: For both of us, yes.

Doug: I know why you don't spend much time or energy hating UGA. Because that'd be like still holding a grudge against the kid who stole your lunch money in third grade, and whose house you have burned down every Christmas since. Florida fans treat us like we treat Techies. Sucks to admit it, but it's true. You know it, I know it, and the American people know it. And you're both a Gator and a Techie, which is what makes this even weirder.

Orson: Right. And this game is like this the Japanese soldier who, after years of raping and pillaging in China, is about to be savagely chopped to pieces by a Shanghai axe gang. It's going to hurt, and it's going to take so many swings as to be laughable because a.) the axes suck, and b.) their axe-swinging coach sucks, but it's fair. As we bleed out slowly under a thousand small swings, we'll acknowledge that, axe gang: it's fair.

Doug: Mark Richt would never kill someone with an axe. He'd shove them in the back -- gently -- and then when they turned around, he'd ask "You know Jesus has a plan for you, right?"

Orson:  "...and that plan is MURDER!" Then Richt would dramatically pull out a knife, but instead of stabbing right for the heart, he'd kind of just slap around with it, you know? No killer instinct. We'd have to bleed to death from a lack of defense and inability to punch back. Did I mention the knife was a butter knife, and that our hands are tied? 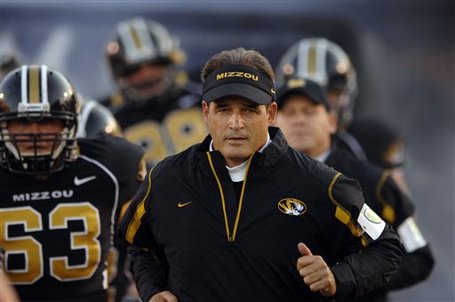 Doug: Richt will put the backups in and John Brantley will complete an 80-yard Hail Mary to Jeff Demps against our third-string secondary. He will have intended to throw it to Deonte Thompson, of course, but threw it about five yards behind him.

Orson: No, Deonte would doink it into Demps' hands. It's the cockfingers again.

Doug: See? This is the kind of luck Urbz brings with him.

Orson: We've already lost to a worse team, mind you: Mississippi State. At home. With seven points on the board.

Orson: I know you lost to them too, but you've figured some things out since then, and Miss State does have a shocking number of Asian ladies.

Doug: If by "figured things out" you mean "discovered that Tennessee plays Nick Reveiz and ten quadriplegic dwarves on defense."

Orson: Plus AJ Green will be indefensible and you cannot contest this. I suspect, deep in the darkest part of our black heart, that Teryl Austin has NFL AIDS, and thus coaches a loose zone when all else fails. This loose zone can also be described as "Zookish" in its tendencies. I did just go there.

Doug: But if there's one thing that can be counted on in this rivalry, it is that Georgia's best player, its Great White (or Black) Hope, will comprehensively underperform in every way. Terrence Edwards in '02. David Greene in '03. DJ Shockley in '05, who probably injured himself on purpose in the Arkansas game just so he wouldn't have to bear the burden of propping us up in Jacksonville.

Orson: Cunning strategy, that. Shockley always was your finest quarterback, because fuck a David Greene. 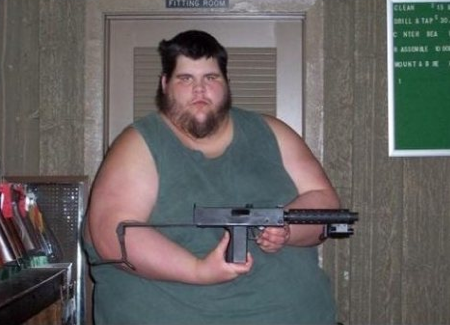 David Greene, seen here at his playing weight with friend.

Doug: What this means is that AJ will probably catch two passes for -3 yards before leaving the game for good with a sprained pubic bone in the second quarter. Don't ask me how you sprain that, I don't know. But we'll find a way. This is, of course, even IF A.J. sees the field. I heard our offense was so perplexed about having everyone on the field and healthy at the same time that our entire WR corps knocked over a Wells Fargo last night just to get someone suspended.

Orson: I do have one small bright spot of optimism. The new low of losing by many points to you in Jacksonville gets us one step closer to getting Addazio transferred, promoted out of his job, or perhaps even abducted by shady, powerful boosters.

Doug: Our small glimmer of hope is that we might at least play you guys close enough to give Urban Meyer an actual heart attack. (It's OK to go back to wishing actual harm on him again, right? He went back to work literally days after his daughter said "I get my daddy back.")

Orson: Sure. I don't wish Mark Richt any harm at all, btw. He can and should stay as long as he likes. Get it? Because he loses to Florida! A lot! And feebly so!

Doug: Sigh. Yes, fine. Because he's probably going to go 7-5 or 8-4 for the rest of his years. Not good enough to be worth anything, but not bad enough to fire.

Orson: Maybe he and Meyer are just both milquetoast together now Driving around in a Ford Taurus. Listening to Rob Thomas and some hardcore queefcore. Not even like Matchbox 20 Rob Thomas, but recent Rob Thomas singing about like angels and tuberculosis and shit.

They get in the car, listen to some queefcore tunes, go to McDonald's and get a few hamburgers. When they ask if they need ketchup, they're like "What? NO WAY THAT'S TOO SPICY FOR ME."

Doug: Richt doesn't eat milquetoast. Doesn't agree with his system. (On a different note, the Taurus used to be AWESOME. Seriously, that thing was the shit back in '87. What the fuck happened?) Addazio and Bobo are both in the back seat, wearing helmets and harnesses because they might hurt themselves.

Orson: Then they go watch Mad About You reruns, which they enjoy even though that Paul Reiser is a little edgy!

Doug: And when they go home, they retire to separate beds.

Orson: Yeah. And you know who's stuffed in the trunk the whole time? Us. Riding along, powerless to do anything about it. When my ferret farming empire gets off the ground, that'll all change.

Doug: You're gonna gather up enough money to get Meyer fired and hire Mike Shanahan away from the Redskins, aren't you, just as one last "ha ha fuck you" pointed in my direction?

Orson: No. NFL AIDS. Turns all smart coaches into complete and total febrile imbeciles at the college level; makes 45 yard field goals seem like the height of offensive achievement; turns the prevent defense, the coitus interruptus of playcalls, into a valid birth control strategy against the other team scoring.

Doug: Well, that explains why Chan Gailey can still find work. Even if it is just Buffalo. 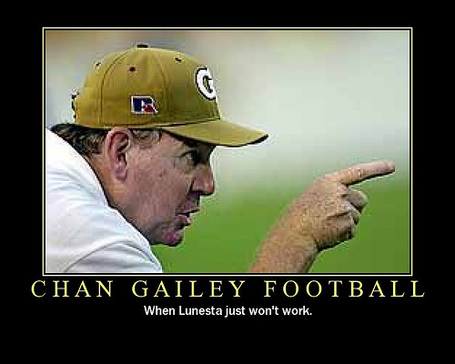 Orson: The NFL coaching hiring process is really just a series of dogs all eating each other's vomit over and over again.

Doug: Or "Human Centipede" with cheerleaders.

Doug: Yeah, I think that's going to be our high school's 20th class reunion theme. OK, score prediction. I'm going to say Florida 32, Georgia 17. Gators move the ball well on our secondary, going 25-of-26 on third down, but bog down in the red zone and have to settle for 10 field goals. Oh, plus the safety, of course. Because Carlton Thomas is still short.

Orson: I'm nearly reversing that: 31-16, because we fumble a TD away, heart field goals, and are so much worse on offense than you can possibly have imagined. It will shock you almost as much as it will delight you.

Doug: Oh and one last thing: I asked Justin Houston what his favorite band was and he answered "Ke$ha." And he wasn't being ironic.

CAUSE EVEN IF I PLAY DRUNK I'M GONNA GET THAT SACK

YO OFFENSE BE SO CONTRIVED-TRIVED

BRANTLEY BURIED DOWN IN THEM GRASSES

CAUSE ADDAZIO MAKES US ILL

Doug: Don't know whether to be awed or horrified that you know all this. Probably equal parts both.

Orson: /stabs self in face. 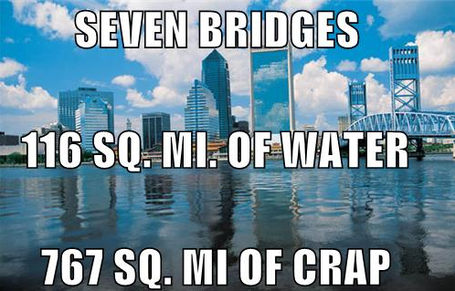