Share All sharing options for: THE SQUAT RACK OF DESIRE JUST WANTS TO GIVE YOU THE GIFT OF TAYLOR DAYNE

The Squat Rack Of Desire comes to you this week on behalf of the EDSBS and Rick Muscles-sponsored charity Squats for Tots. We shall not rest until our dream of seeing every child in the Birmingham area squat double their body weight by the age of 18. Follow

I HAVE DECLARED MYSELF THE KING OF SEC FOOTBALL THEMED DICK JOKES!

If Auburn were Uncle Tupelo, Chizik would be Jay Farrar and Malzahn would be Jeff Tweedy.

I'm getting sick and tired of people attributing all my twitter success to me being Pete Boone's nephew.

Heroes, Tony Romo, Eli Manning and Moe's Burritos are things I thought were good in 2008.

Jared Allen kind of looks like the pro football version of Mac from Always Sunny in Philadelphia.

Clay Matthews looks like an extra from House of a 1000 Corpses. 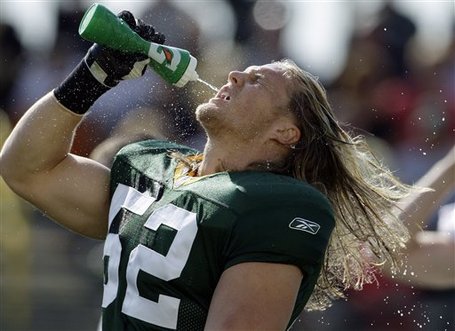 The only thing funnier than me having a real bleacher report page would be if I live tweeted a sexual encounter with Bebe Buell.

Are baseball players that last guys on Earth who think gold chains are cool?

Can't decide if I should nickname my dick Shane Falco or Johnny Utah.

When y'all sit around staring at your Dick and think up nicknames for it, do your thoughts ever turn to your dad's drinking problems?

If you ever wanted to know what I was like in college, check out the blonde bad guy on Blue Mountain State.

Dear Tennessee, I'm not saying Dooley is not the right guy, but hire Chip Kelly in 2 years and get your shit going.

I think we can all agree Drive By Truckers' biggest flaw is, I assume, they are Auburn fans.

Who is dumber Jenn Brown or Les Miles?

Another week comes and goes and Jack Del Rio still makes more money than all of us combined. 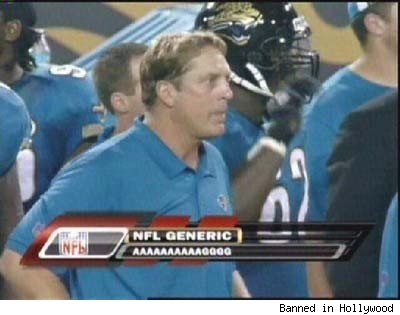 I wish there was a church in Birmingham that had t-shirts with this motto, "A Football Church With A Baptist Problem."

Ole Miss new mascot needs to be a black bear shooting itself in the foot.

I bet Tarantino is the world's richest guy who drinks Mountain Dew.

I wish there were more bands comprised of men in their 50s who play Jimmy Buffett songs in strip malls.

Although all evidence points to you killing a man, I love your Old Spice commercials, Ray Lewis.

Remember the late 90s when Nascar and wrestling were good. I blame meth for the drop off in each.

Wish the NCAA would investigate something useful, like how Jonathan Coachman went from the WWE to Sports Center.

South Carolina ruined Ole Miss's season last year and Bama's this year. They are like a drunk 23 year old at a wedding reception

I keep waiting for an opportunity to call Starkville "Starkchill."

I'm getting tired of cheerleaders with knee braces.

Dennis Eckersley looks like he blew coke off your mom's tits in 1979. 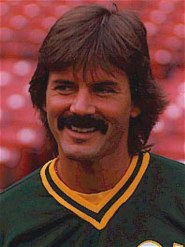 If I advertised phones, I'd promise it is impossible to ever see Avatar on it.

Alcohol removed from Listerine? This is a slap to the face for the cast of Toy Soldiers.

Future Reference: If you invite me to your tailgate, don't bother unless you are willing to present me with an award or honorary degree.

I'm so poor I have to watch Marvin Gardens Empire.

Who do you think has eaten the more disgusting thing, James Carville or Terry Bradshaw?

I haven't been the biggest fan of Will Ferrell lately, but we need to have him play Les Miles in his bio pic.

Kirby Smart has a great defense and a bad hair cut.

The LSU majorettes are leading the S.E.C. in camel toes

I will never go to Oklahoma State to see a game- not dealing with scary guys in cowboys hats holding paddles.

Creating a weight lifting progam where you freeze yourself in liquid nitrogen called, Dippin' Squats.

If I get married, I'm nick naming my wife Corretta Squat King.

Sometimes I think Steve Levy is Mike Greenberg 5 years in the future.

If I were an artist, I'd express myself by painting a squat rack black.

Romo's broken clavicle is a sure sign that Jessica Simpson is now a fat Wiccan.

Anybody else agree that Josh Brolin makes Hollywood look dumber than it actually is?

Gonna buy a really nice professional sign that says, "Rick Muscles For Mr. Ole Miss" and put it in SAE's front lawn. What could go wrong? 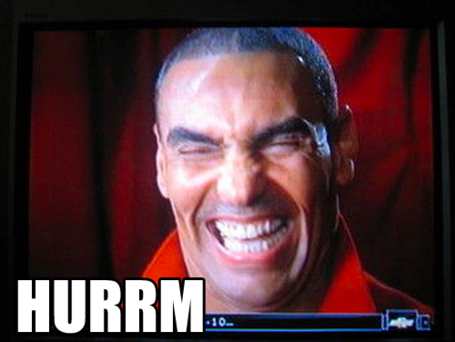 Rumor has it (which means it isn't true) Urban Myer's wife is addicted to shop lifting.

I get hyped up when I take showers in the morning because my bottle of Garnier Fructis looks like a Mooninite.

If you sit court side at Laker games and stand up to yell at referees, I assume you have no redeeming qualities.

If you do a Zaxby's commercial you are no longer considered a celebrity.

In the "Old Guys" commercials during the NBA playoffs, David Spade looks like a WNBA Player in his Suns jersey.

Scholarly reader @tbailey asks," I've been watching a lot of Two And A Half Men Men. What's your preferred method of suicide." Being choked to death by a passionate Charlie Sheen.

The biggest casualty of Big Ten expansion is the death of the Big 10 Smug Meme.

I'm starting to wonder if ESPN is behind all the expansion, they're like the Bilderberg group or the Guild of Calamitous Intent.

if I wrote a novel about the Pac10's unrequited love for Texas, it would end with the Pac10 starting the band Fall Out Boy.

Jack Ramsey, Jerry Punch and Dr Watson must have sucked at healing people.

Things I didn't know about hip hop: having a hipster dj manning a Mac book pro is gangster.

I'm going to get a full size portrait tattoo of Holly Rowe's face on my stomach.

My list of topics of conversation with older Birmingham strippers:

I wonder if Bill Walton has a giant plastic surgeon.

At the Kentucky Derby 3 years ago, I met Kid Rock ( I was really drunk) and I called him Mr. Rock.

Planning on writing a novel about a wild horse, whose spirit can't be broken.

My new invention is a fry daddy attached to the front of a kayak. I call it the Fryak.